Since I returned from Iraq in 2004, too many of my friends in the UFO field have died. The latest was Karl Pflock whose obituary can be accessed in the June 2006 Archives. 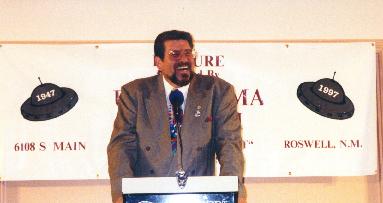 Philip Klass, who clashed with so many of us in the field died after a long fight with various diseases. Too many delighted that he was gone. While Philip and I disagreed on many aspects of the UFO field, I believe that we had a mutual respect for each other’s position. Yes, I’ve heard the stories of his nasty attacks on people, well aware that he was capable of doing anything he could to make life miserable for those on the other side of the fence. Some of his attacks were unfair, but certainly no worse than what those of us on our side have done to our own.
But the death that hit closest to home was Russ Estes. I had first met him in Albuquerque when he was working on a documentary about UFOs. He was at the MUFON Convention there, interviewing the speakers, the investigators, and anyone else who might have an interesting story to tell. I was one of those who sat down for his camera. I really remember little of what I said, other than providing information about my investigations into Roswell.
Months later, Don Ecker of UFO magazine, was arranging for UFO researchers to meet at Disney World to help promote the opening of a new "experience" with an alien theme. On my way to Florida I met Russ on the aircraft. I remembered him because he was a huge man.
While in Florida we spent quite a bit of time together talking about UFOs. Russ was as interested as I. We formed a friendship there that would last until his death.
After Florida I stayed in touch with Russ. He planned more documentaries and thought I could help him. I liked the idea of putting some of these ideas onto film, or more accurately, video tape.
Over the next decade we would meet many times. I traveled to California to visit him. I watched as he worked his magic with video tape and learned that the was an accomplished artist, had performed on a regular basis at the old Playboy Clubs, served in Vietnam with the Army Security Agency, and had lectured on a variety of topics.
Russ and I wrote a couple of books together. In two of them, he was more the illustrator than the writer, though he did contribute to the writing while I did little to contribute to the illustration. Together with Dr. William Cone, we wrote The Abduction Enigma about alien abductions. I was always a little disappointed that the book didn’t get a wider circulation because I thought it made some important points about abductions. Russ and Bill Cone had worked out much of the insight, though I believe I added to those insights.
In his last years, Russ had trouble with diabetes. At first it was an annoyance, meaning he had to eat on a fairly rigid schedule, but later it caused other troubles, as diabetes does. He might have suffered a fatal h 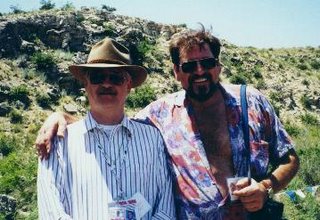 eart attack because of the diabetes, but given his location and circumstances, he was revived for a few more years. Think about that for a moment. He died of a heart attack, and was revived to live another few years. Not many can say that.
We’d had a tradition that I would call him just after midnight on New Year’s Day, asking how things were back in the past. I failed to make the call as 2004 slipped into 2005 because I hadn’t been back from Iraq all that long and I fell asleep. He tried to call me, but for some reason, I didn’t hear the telephone. I called him the next day. It was the last time we’d speak.
Russ had a fine mind and saw through much of the nonsense in the UFO field quickly. He’d ask the hard questions and that would, of course, annoy others. Exposing the flaws in a theory should make those proposing the theory reevaluate it but in the world of UFOs, it gets you labeled as a debunker and a government agent.
Russ was both these things... in some respects. Yes, he had once had ties to the intelligence community, but like me, those ties were of a non UFO nature and never really influenced what he thought and did. He had been a government agent just as anyone who served in the military, or worked for the IRS or the FBI or FEMA had been a government agent.
And he was a debunker in the best sense of the word. He took the bunk out of some aspects of the UFO field. You just have to watch the video of Harley Byrd going on and on about how he is the only real UFO researcher and he knows everything about UFOs. Russ didn’t really ask questions. He just let Byrd talk.
He produce

d an audio tape of music related to the UFO field with some wonderful songs on it. He sang, along with Bill Cone and Val Bankston, who also wrote much of the music. For a supposedly amateur tape, it was surprisingly professional. Such was Russ’s talent.
And now my friend is gone way too soon. I miss our sometimes esoteric chats, our delight at seeing the truth emerge when no one else wanted to hear it (I think of Gerald Anderson here as but a single example) and our realization that Don Schmitt had feet of clay.
What he wanted in the UFO field was to get at the truth. He talked to everyone and presented those findings to those who would listen. He didn’t have a big name, just a big heart.
Russ could be over powering, but only because he had so many talents in so many places. He was opinionated, but backed up his opinions with facts. Sometimes he was intractable, but more often he would listen to others, searching for weakness in their arguments. He did much for the field but few realize his contribution.
Russ was unique. He was intelligent, talented, insightful and sometimes a control freak, but he was always a friend. He is impossible to replace and I certainly miss him.
Posted by KRandle at 3:14 PM

I think The Abduction Enigma is the best book out there on the abduction phenomenon. I think, given the conclusions in the book, that we both know why it hasn't received much attention within ufology (the same can be said for Greg Bishop's Project Beta).

I never met Estes, but if his contribution to The Abduction Enigma was an indication of who he was, he'll be missed.

I accidentally stumbled on this article about an old friend. Russ Estes. Russ and Pat were good friends with my wife Lynn and me until we lost contact about 12 years ago. I was amazed at the things he'd done. He had a medical degree, worked in government intelligence, produced a television show from the studio in his house in Lake Arrowhead, was a reserve San Bernardino County Deputy Sheriff and was a Lake Arrowhead lake patrolman. He was probably the most interesting man I've ever met. I only wish that I could have made contact with his before he passed. All of our best to Pat.