The FBI Memo and Roswell

Over the decades, a few documents relating to the Roswell UFO crash (or the Roswell events if you wish to remove UFO from the discussion) have been found. One of those developed after Army Brigadier General George F. Schulgen asked for FBI help “...in locating and questioning individuals who first sighted the so-called flying discs...”
On July 10, 1947, an FBI memo was created by D. M. Ladd for E. G. Fitch, outlining the Army request. That request was forward to Clyde Tolson, the number two man in the FBI at the time. Tolson endorsed the memo, writing on July 15, “I think we should do this.” 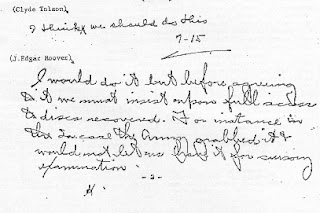 Hoover then endorsed the endorsement (seen here). He wrote, “I would do this but before agreeing to it we must insist upon full access to discs recovered. For instance, in the La. case the Army grabbed it and would not let us have it for cursory examination.”
But Hoover’s handwriting was sloppy and the crucial point, the location, as “in the La case” has been disputed for years. It seems that it can also be read as Sw or Sov or 2a. Of course, if it said, “Sw” then that could refer to the Roswell case.
Tom Carey and I have been discussing this through email for a couple of weeks. I am of the opinion that Hoover wrote “La” and this refers to a case from Shreveport, Louisiana. It is clear that the Shreveport report is a hoax, given that the disc was recovered and examined.
According to information from the Project Blue Book files, the Headquarters, Air Training Command, the office of the AC of S, A-2 [Assistant Chief of Staff, Air Intelligence] Barksdale Field, LA, had received a report that a “Flying Disc [had been] found in Shreveport, Louisiana [on] 7 July 1947.” 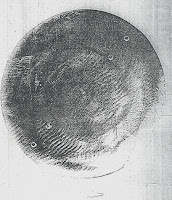 In the course of their investigation, they found that the disc was small (seen here), there was an electronic starter attached to it that came from a fluorescent light and two condensers from electric fans. The man who built it, and whose name had been removed from the file, also said that he had used a torch to put soot on the edges so that it looked as if the disc had been spinning.
In other words, the evidence of a hoax is well established.
But there is more.
According to the documentation available, the FBI was alerted to the Shreveport case and FBI agents did interview one of the sources. The FBI memo on the case also said that the Army had taken the disc into their possession.
This case seems to fit facts and it is an “La.”
There is another piece to this. On July 24, 1947, there is another FBI memo. This one mentions the Hoover note but now it is typewritten. It says the same thing but the term has been identified. The crucial sentence says, “For instance, in the La. case the Army grabbed it and would not let us have it for cursory examination.”
That seems to end the discussion, but Tom isn’t as sure as I am. He believes that J. G. Fitch, who provided the typewritten version, in his memo might have suffered from the same problems as the rest of us, meaning that he wasn’t sure what Hoover meant and that question remains open. Tom wants to pursue this a little further to see if he can find a concrete answer.
Tom plans to chase this using a couple of resources he has developed over the last few years. He thinks it is important enough to invest a little additional and effort in finding a solid, final conclusion. And that, really, is the purpose of the Team. To find final, solid answers to the questions that remain about the Roswell case.
Posted by KRandle at 9:47 AM

I think the historical record is pretty clear the USAF wanted out of the business of running down UFO witness accounts from the public in the worst way and the FBI was a convenient organization to try to pawn the dog work off on. Obviously, the FBI wanted the best information available in return. That was never going to happen under Harry Truman who absolutely HATED Hoover.

But even in the (very) remote chance that it was 'SW', why would Hoover use such a vague abbreviation to indicate the Roswell disc? He already had the FBI Dallas teletype in his possession and would have used either 'Roswell' or 'NM' as the obvious abbreviation.

"Sw" seems like a stretch, in more ways than one. Surely there are enough examples of Hoover's handwriting available to make some comparisons. While that would not prove anything beyond doubt, it is at least actual evidence. I would be very surprised if this has not been done by someone.

The 'SW' connection comes from the Berlitz-Moore book chapter 8. Moore is at pains to try and 'prove' that the Louisiana case was NOT the one Hoover was talking about.

Moore even suggests it might refer to 'LA' meaning Los Angeles "the area in which Edwards Air Force base is located".

LA aint that big, even now, is it?

And why bring Edwards AFB into it anyway? Presumably because of the oft-repeated tale that Ike once viewed the remains of a crashed saucer there! (And Moore was at that time trying to show that part of the Roswell disc was transported to Edwards, see the photo section of the Berlitz-Moore book).

The story has changed a bit since those days, eh Kevin?

"La" could conceivably also refer to Los Alamos, the rumored destination of at least some of the debris (e.g., testimony of Robert Smith).

That it refers to the Louisiana hoax disc seems reasonable except for Hoover's protestation that the Army grabbed it and wouldn't let the FBI have it for even cursory examination. If it was such a transparent hoax, why would the Army be reluctant to let the FBI look at it if Hoover was really referring to the Shreveport object?

Again, "La." probably does refer to Louisiana, but the question of Hoover's grousing about the Army keeping the FBI out of the loop does nag at me.

Another point is Hoover wanting full access to any and all discS that the Army recovered, the "La." case being but one example. The suggestion here is other cases where the FBI was denied access, hoax disc or not. Roswell would still fall under this category.

The Dallas FBI telegram about Roswell on July 8 states that the Roswell object was being taken to Wright Field and the Cincinnati office would be informed of the results of the examination there. The GAO went looking through FBI files to find that promised report and couldn't find it, another piece of paper trail that should have been there but wasn't.

Contrast this with another hoax disc the following month where the FBI sent it to Wright Field and got back a very detailed report down to the likely radio it was made from, but no such document about Roswell, if only to say it was nothing but a weather balloon and radar target.

Please note that there is a document with a typewritten version of the Hoover endorsement and there is nothing that suggests that interpretation is in error. In other words, it is "La."

From the Blue Book file on this case is a document dated July 8 and begins, "The FBI has received a teletype from their New Orleans Field Division..." and ends, "...allegedly notified G-2, Barksdale Field, Shreveport, Louisiana, and they took the disc in their possession."

That suggests to me that the Army "grabbed" it and Hoover might well have thought the Army wouldn't let them look at it. This sounds more like Hoover getting his nose out of joint because someone didn't cave in to his agents' request... not that it was necessary. Everyone agreed it was a hoax.

I am convinced the evidence is that the La referred to by Hoover is this case. It all seems to fit together.

But then, if Tom wants to follow up on it, more power to him.

I can see why Hoover and the FBI would be concerned because of liability on any investigation for which the organization would be held accountable by higher ups. The FBI would do the best job of identifying parts used to make a model saucer and in locating the builder. They have the legal authority to file charges if necessary and so would be held responsible if an object is deemed a hoax or not. You don't want your organization and your job made to look foolish and un-trustworthy and the only way to protect yourself is to have full access to the gizmo, evidence, info so your people can look into it. I have faced the same situation today and so have many of you I would imagine. It does sound like this is a reference to the Louisiana object. I would like to learn more about it myself, I don't think I had heard of it before it. Perhaps Kevin's books talk about it, so I need to buy and read up on more of these historic gags, jokes and hoax cases. Any recommendations in this direction?

I think that there is reason to doubt that the abbreviation is La. The initial stroke of a written L starts from the left at the top and moves to the write. In the text shown, the fist stroke starts from the right and moves to the left. This would imply it is a capital I. The second letter looks like the a in the word enabled. So another possibility is that this says Ia not La. Since you are attempting to do a careful study of the Roswell incident, I suggest you calculate and assign probabilities to the different possibilities. Regards.