On The witness, a president of an advertizing agency, told Air Force investigators that he, and others were traveling from New York to Washington, D.C. Because the sky was beautiful, with the sun setting, he decided to take several pictures. Holding the camera outside the car window, as they traveled at sixty-five miles an hou

r. The witness told the Air Force that his vision was limited because they were in a sports car, and that he didn’t see anything strange in the sky. The objects were seen when the slide film was developed.
After they returned to New York, and with the film being projected, for the first time, they saw the objects near the bridge. The witness had the pictures blown up so that the objects were about a foot in diameter. He said that they were domed discs, with indentations on the dome. He believed they were metallic, and that they were reflecting the light of the sun. According to him, based on their position at the bridge, the objects were moving to the south, following the river.
The witness knew that the Air Force had been investigating UFOs and thought they would be best qualified to analyze the photographs. An Air Force officer, Lieutenant Conaway, from the Information Office at Suffolk County Air Force Base, reported to Lieutenant Colonel Hector Quintanilla, of Project Blue Book, investigated. He assured the witness that his original photographs would be returned, but that the Air Force couldn’t properly analyze anything other than the original negatives. Since these were color slides, the Air Force officer wanted the original transparencies.
Conaway was concerned because the man told him that the photographs were valuable. According to the report, in a sentense that was underlined, Conaway noted that the man had said he "had numerous money offers from magazines."
Conaway was told by Quintanilla that Air Force regulations demanded that he sent the original negatives and that the forms be completed properly. Quintanilla then told Conaway that the witness was probably trying to get the "Air Force to say that his photographs are authentic. Well, all photographs were authentic, but UFOs aren’t."
Although the photographs were provided to the Air Force, apparently the paperwork, that is the report by the witness, was not completed quickly enough. The Air Force returned the photographs before they received the report. Therefore, according to the Air Force, the case was labeled as "insufficient data for a scientific analysis." In this case, it meant that the witness had not complied with Air Force requests to complete their rather lengthy forms. 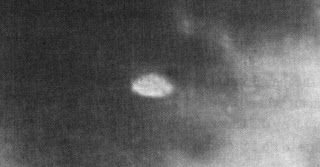 One of the Air Force forms, in which the officer asked specific questions, ended with a summary. It directed that the investigator "State your own personal evaluation of the report. What do you think the object was? Do you think something other than the sighting motivated the caller? Include anything which may add to the objectivity of the report. Include your evaluation of the caller’s reliability."
Sergeant Robert Becker filled out the form and wrote, "According to the caller’s description, he did photograph some type of object, rather than an optical illusion. I would not however, exclude the possibility of uncommonly shaped high or middle clouds. I did not form any opinion of some motivation for calling. I did not[e] one apparent contradiction; he said he was just photographing a beutiful (sic) sunset, yet his discription (sic) of the photos sounds to me like he might have, in fact, been shooting at the objects."
The problem here is that the witness had, quite clearly, studied the photographs for a long period before alerting the Air Force. He told Air Force investigators that they had studied the photographs. That study certainly could have contributed to the witnesses telling of the story, suggesting that the witness had actually tried to photograph the objects rather than just a beautiful sky.
The Air Force attitude here is also of interest. Their bias, that photographs are real, but UFOs are not is interesting. He suggests that by this point, June 1968, they were just attempting to explain rather than investigate.
KRandle at 3:03 PM