Anyone who has been paying attention knows that I have little faith that the new emphasis on investigations into UFO or UAP sightings will generate much in the way of increased information. We have been told that sightings by military personnel will be born classified, meaning that the information will not be freely available. And we have been told that the investigations will concentrate on those military sightings.

However, on next Tuesday, May 17, according to the latest information, there will be a briefing that will focus on last year’s briefing of 144 reports with 143 of them remaining unexplained.

Here’s the interesting thing about this. The House Intelligence Committee’s subcommittee on Counterterrorism, Counter Intelligence and Counterproliferation will hold the hearing that will be followed by a classified hearing by the Airborne Object Identification and Management Synchronization Group (AOIMSG). This a ridiculous name that does more to obscure than to explain. In the past there have been much better names but, in the world today, if it isn’t overly complicated, well, it just isn’t worth the effort.

And, all this doesn’t bode well because it seems the unclassified event has little relevance to UFOs and the part that would deal directly with the UFOs is classified. That, of course, is my reading based on limited information. There could well be an examination of some of the UFO (I detest the name UAP) that has been collected, but I suspect the national security blanket will be thrown around.

Adam Schiff said that the hearing would “give the public an opportunity to hear directly from subject matter experts and leaders in the Intelligence Community on one of the greatest mysteries of our time and to break the cycle of excessive secrecy and speculation with truth and transparency.”

I do wonder who these “subject matter experts” are. Will they be the same ones that have been talking about UFOs recently, or are they going to bring in someone who has been around the field for a long time (Jerry Clark and Mike Swords spring to mind here) … and will they be skeptical or from the other side of the fence? Depending on your point of view, it would be very simple to select the subject matter experts based not on their dispassionate research, but someone who had the proper orientation. Governmental transparency is a tricky thing. All we have to look at other governmental committee investigations and we can see the agenda of those who are participating.

I have to say, while Schiff might believe that, I don’t believe it will happen, given past experience. Project Sign, in 1948, was supposed to be a high priority investigation, but the Air Force Chief of Staff didn’t like some of the conclusions drawn and the project basically died. Ed Ruppelt came in with orders to revitalize the investigation, which he did, but the Robertson Panel of 1953 convinced both the military and civilian leadership that there was nothing to UFOs. The Air Force sponsored University of Colorado study was supposed to be unbiased and scientific, but it was compromised from the very beginning by bias and a lack of science. What happened was a real desire to find answers in the beginning eventually degenerated into public relations and explanations that make no logical sense. The Levelland sightings, spread over multiple witnesses and locations were eventually explained by ball lightning… something that scientists still wonder if truly exists.

But, as always, there are still interesting sightings to report from the last two months. On April 22 of this year, the witness, in Orlando, Florida, reported that she had set multiple hunting trackers which have produced a number of UFO photos. She said that she watched an alien climb into his spacecraft. She said that he allowed her to take photographs of his ship, but apparently none of him. The ship is dull black and slightly larger than a jet fighter.

She said that the alien is monitoring our space program. She said that the alien can jam cell phone signals to prevent a video. She also mentioned that the government has flown in to talk to her. And yes, I am somewhat reluctant to report this, but the report is real. I don’t want to make the mistake the Air Force did by rejecting nearly all reports of alien creatures as a psychological problem on the part of the witness. As the old prospector said, you don’t expect to find gold but that shouldn’t stop you from looking. The question here is whether or not the observations are real but there is the photo that can be seen here. 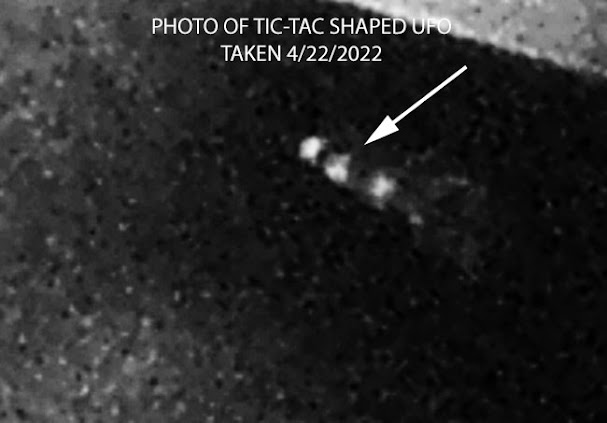 You can read the whole report here:

On another note, is a photo from Vista, California on March 17 of this year. The witness was playing golf at the Vista Valley Golf Course when he sighted a circular object with a vertical fin. The UFO was a flat, circular craft with the back quarter cut off. There was no sound and he used a four-power rangefinder to get a better look at it. He took four pictures of it before it disappeared behind the hills.


As always, I provide some of this information because the cases are interesting, but don’t endorse them unless I can find additional confirmation. If I have an update on these sightings, I will post relevant information the blog.