Not all that long ago (this last week, actually) Tim Printy sent me a question about part of the Kecksburg UFO crash. He noted that I had mentioned an Air Force officer named Steven Paquette. I wrote in Crash – When UFOs Fall from the Sky, that a document in the Project Blue Book files suggested that he was stationed in New Hampton, Massachusetts, but he had been ordered to participate in the search. Printy wrote that he had been through the Blue Book files and couldn’t find this document.
He also found that an officer with the same name seemed to be stationed much closer to Kecksburg and that he had participated in other UFO investigations. In fact, it seemed that Paquette had an additional duty of investigating UFO sightings in his area, an assignment that fell to many lieutenants in the 1960s.
Printy wanted to know if I knew this about Paquette, and if I could supply the document that I had used as a source, and if there really was a New Hampton, Massachusetts. All very good questions.
So, I went through my Kecksburg file which is about six inched thick and located the document. It was a teletype message that is part of a newspaper story about the Kecksburg sighting. I had gotten it when I asked CUFOS to send me a copy of the Blue Book file on Kecksburg.
Then I looked through the Project Blue Book files, which I now have on microfilm thanks, in part, to Michael Swords and CUFOS, figuring I would find the document there. I was surprised at the size of the Blue Book file, but only because it was so thin. There were a number of “Memos for the Record,” and a final conclusion that the sighting was “Astro, Meteor.”
But the teletype message, and a large number of newspaper clippings that I had thought were part of the Blue Book file were not there. Clearly, the fellows at CUFOS sent me everything they had and that included research that had probably been part of the NICAP files and later the CUFOS files. It was a very complete package and based on what I had seen in the Blue Book files of other, similar cases, I wasn’t surprised by all the extra material. I now know that very little of this information made it into Blue Book.
Printy sent me links to a couple of files for Blue Book that were online and Paquette appeared in them. He wanted to know if I thought it was the same officer. Well, yeah, since the name is not Smith or Johnson, I think it was the same guy, though the spelling of the first name is Stephen rather than Steven.
Of course, this is the world of the internet, and I found that there were quite a few people named Steven Paquette running around. I also found a number of them named Stephen Paquette. Still, how many of them would have been lieutenants in 1965 and 1966 when the various Blue Book investigations were accomplished.
And what about this New Hampton, Massachusetts, which apparently doesn’t exist? 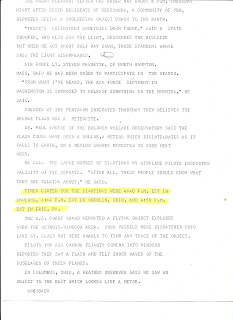 From reading the teletype (a copy of which I did email to Printy and no, the highlighted part does not mention Paquette, that's higher on the message) it seems the reporter was giving a nod to Paquette’s hometown, though it was obviously not in Massachusetts. Printy mentioned a New Hampton, New Hampshire and I know of one in Iowa (but a check of my Britannica Atlas shows only New Hamptons in Iowa and New York). With the information supplied by Printy, it’s clear that Paquette wasn’t stationed in Massachusetts at the time. He was probably from the east coast and the reporter just screwed up the state. And it seems that the spelling of his first name was screwed up by the reporter as well (at least that seems to be the most logical assumption here).
Paquette’s whole role in this seems to be clearer today thanks to Printy. There is no evidence that Paquette ever went to Kecksburg, and while I speculated he would not have had a role in this unless he was assigned to some kind of special unit, that speculation seems to be in error. Paquette was stationed in Pennsylvania at the time, seems to have been assigned as a UFO officer as an extra duty and was quoted by the newspaper simply because he was an Air Force officer who talked to a reporter about Kecksburg.
Thanks to Printy, we now have a little more information about the Kecksburg case and we know a little more about this, at the time, low-ranking Air Force officer. We can clarify his role and move on to other aspects of the case.
Posted by KRandle at 3:19 PM

"And it seems that the spelling of his first name was screwed up by the reporter as well (at least that seems to be the most logical assumption here)."

There is one BB page referring to him as 'Steven'. The others are 'Stephen'.

The BB documents referring to Paquette are from Pittsburgh, Eastmont, and Presto, PA. Kecksburg is a short drive SE of them.

Things I learned: there are way fewer New Hamptons in New England than I'd have guessed.

Actually, the document reads North Hampton and not New Hampton. Apparently, Kevin misquoted the teletype in his books. There is a Northampton, MA.

It is North Hampton... one of these days I'm going to learn to read. I could have sworn that it said New Hampton, and I looked at this thing a dozen times over the last few days.

There is a Northampton, MA.

The first hit is this page. The second hit is to a University of Massachusetts Amherst class of 1962 yearbook, listing STEPHEN R. PAQUETTE 485 Bridge Road, Northampton, Massachusetts. Looks as if Paquette is the blond guy, 3rd from the left, bottom of page.

I should point out that Stephen R Paquette was in the Granville Air Society in his junior and senior years after being in the Air Cadet Squadron in his freshman and sophomore years, in case there's any question about whether he had an interest in the air force, though he majored in chemical engineering.