The Roswell Dream Team has expanded again. This time Chris Rutkowski (seen below), a well-known Canadian researcher has joined us. 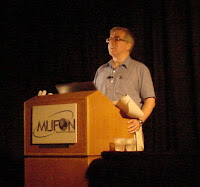 We wanted to bring in someone with a skeptical bent but not someone who was rabidly anti-extraterrestrial. We wanted someone with an open mind, who would point out where we might have slipped off the rails, but not someone who would assume that we were wrong simply because there is no possibility of alien visitation. It is a fine line to walk, but we believe that Chris can walk that line.
Chris himself said, “Although I've been called both a skeptic and a believer (depending on whether you're hearing it from a ‘true believer’ or a skeptic), I tend to think of myself as an objective cynic. I sit on the fence when it comes to the question whether or not some UFOs are alien spacecraft. (The pointy slats are painful, but they can be endured.)”
About the Roswell crash case, Chris said, “I think we're a long way from declaring Roswell an ‘alien’ incident. True, according to some witnesses, the material recovered was unlike anything they had seen, and there certainly was an attempt by the military to cover up or obfuscate information about the event. It's a matter of speculation as to whether or not the material recovered was non-terrestrial in origin, since we don't have any on hand to test.”
He cautioned, and rightly so, that “We're relying on decades-old testimony in some cases, and more recently on memories of family members who may or may not recall with any accuracy statements or events from long ago. Furthermore, some military witnesses may still be reluctant to talk and some may still adhere to their military code of secrecy.”
Chris did provide us with some background information that is probably of interest to all. He wrote in a recent email to me, “My background in astronomy and education (BSc and MEd, respectively) fits well with my interest in science education, particularly when it comes to astronomy-related topics. I have greatly enjoyed showing people Jupiter's moons through small telescopes at public star fests, and telling them stories about how constellations got their names. And yes, the topic of UFOs falls under this broad category of astronomy-related subjects, although by history, not accurately. Astronomers are no better equipped than stock market analysts when it comes to dealing with objects reportedly moving low over witnesses' heads and over airports.”
And he is not a newcomer to the world of UFO investigation. He told me, “... I've been investigating reports of UFOs since the 1970s. I've also been writing about cases and theories since about that time. With many hundreds of case investigations under my belt, I can say that there does not seem to be a single simple explanation for all reports. They're not all hoaxes or misidentifications of stars and meteors. They're not collective illusions. There's a residual percentage of cases which have enough data and detail to explain them as aircraft, stars, planets, balloons, etc., except they are not.”
The plan is to share everything with Chris and get his take on the importance of the information, the evidence, and the thinking involved. Chris said that he liked the idea of a “cold case” investigation and thought with Roswell it was something that was long overdue.
Posted by KRandle at 9:05 AM

I wonderful addition. I wholeheartedly approve.

Glad to hear a semi-skeptic has joined the 'dream team'. This will help you get a different perspective.

I was wondering if you'd considered Brad Sparks for the team given the rigour of his research and the good work he has already done on the topic?