Let’s try this one more time. I had found a reference to a five-page report written by Captain Richard T. Holder in a letter written by Dr. James McDonald. When searching for the documentation, I was using a Xerox copy of the Project Blue Book file, which, I have learned, was somewhat jumbled. I was interested in this five-page report because I could find no such report in the Blue Book files. I believe I have now sorted this out and can say, “There is no five-page report.” That means that I have found the documents and they run to more than five pages. I wonder where McDonald got the idea there were only five pages.

Searching through the Blue Book documents that were recovered by former Project Blue Book officer, Carmon Marano, which seem to be everything that was in the official file, I found a “table of contents” for a section in a folder inside the original folder also labeled with the date. That table of contents labeled the tabs, the first of which was Tab A, Lt. (sic) Holder report. That was everything that I believed was part of that original report, plus several other documents. Following, are the images of that whole section of the Blue Book file. 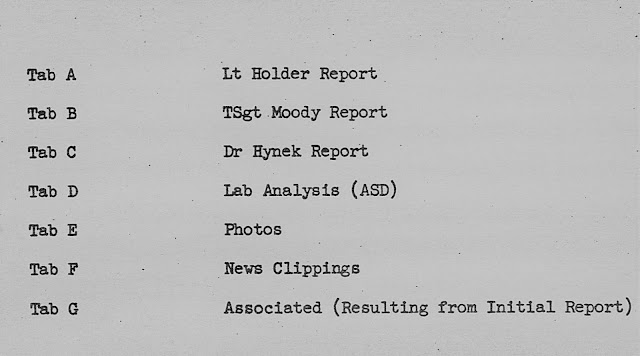 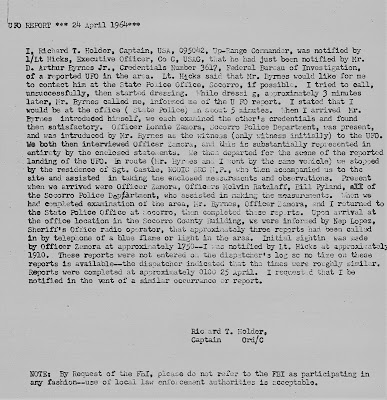 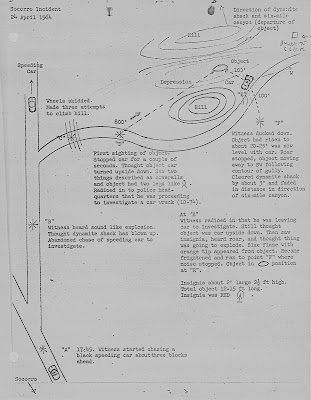 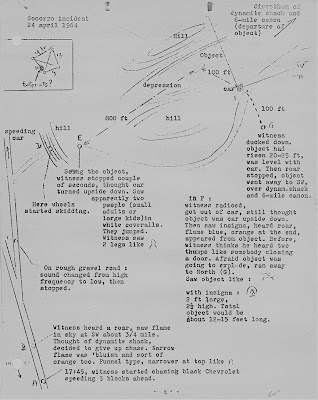 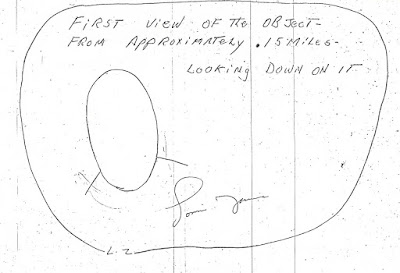 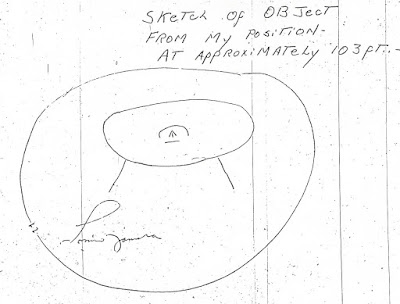 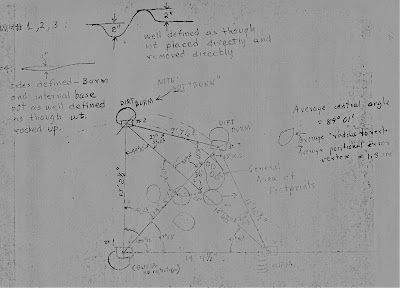 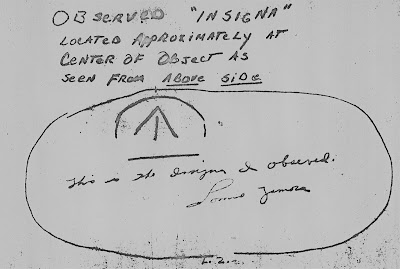 It is clear that the handwritten notes on the drawings made by Lonnie Zamora were made by Holder and that the illustrations were made on the evening of April 24 and in the early morning of April 25. Notice that Zamora did sign them.

Following is a three-page report that is credited to Holder. It is nearly the same as another report credited, in the Xerox file that I have, to Major William Conner, who was the UFO officer (as well as a public relations guy at Kirtland AFB). What I believe happened is that Connor used the Holder report for the basis of his report, though I’m not sure that I understand the rational for it. He added nothing to the report that would suggest a reason for retyping it. It is clear, from the small illustrations in Connor’s report, that they are not the same (meaning here the oval is larger, the symbol is more compact and the final image has a symbol on it that seems to be a hybrid of the description). 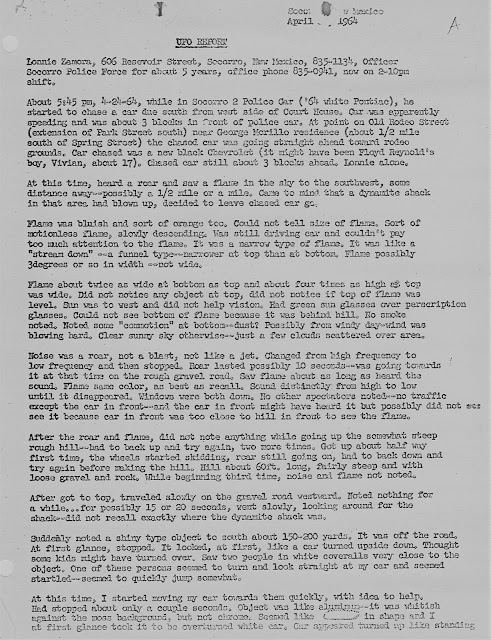 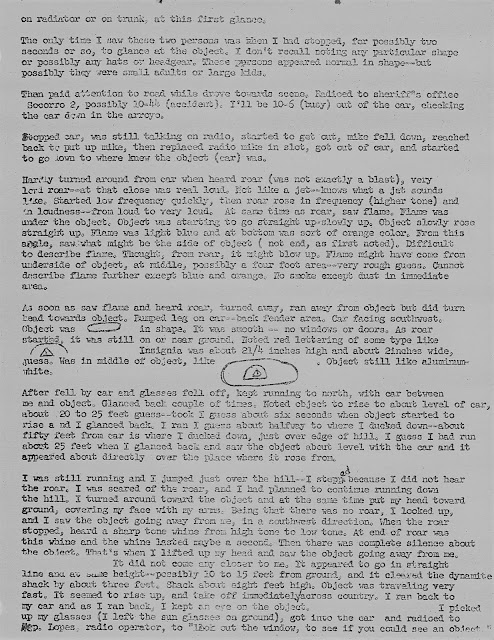 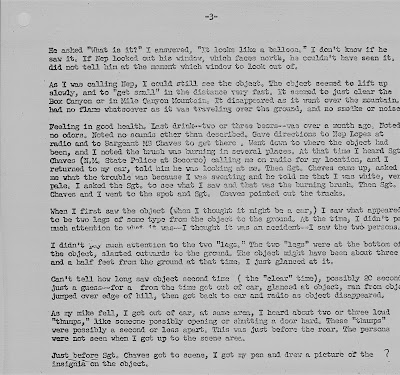 Other than some minor changes, and the names having been redacted from Connor’s report, but not in Holder’s, this is a transcript of the interview with Zamora conducted by Holder and Brynes that first night.

For comparison, here is the report attributed to Major Connor so that you all can see for yourselves what the differences are. 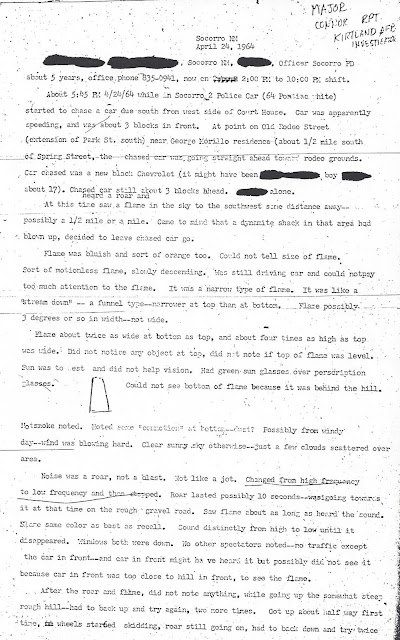 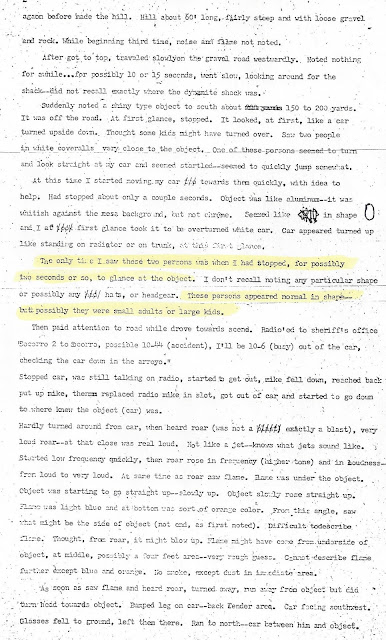 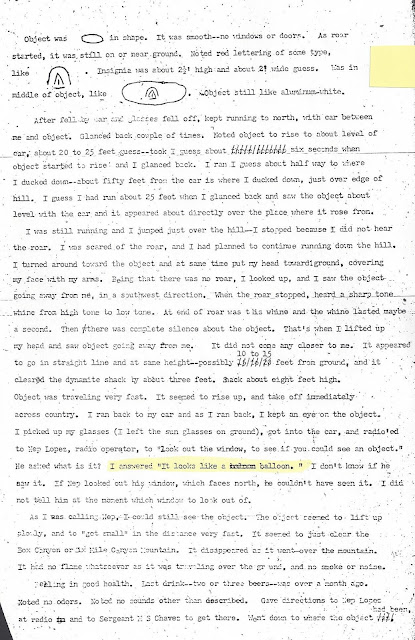 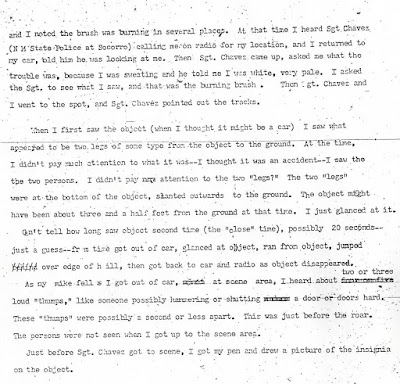 This, I believe, should be the end, the very end of the episode. Had it not been for McDonald’s mention of the five-page report, I’m not sure that I would have been able to put all this together. Again, there are many people who contributed to this including Carmon Marano, Ben Moss, Tony Angiola, Rob Swiatek and Rob Mercer. I have used the Project Blue Book microfilms, the Fold3 website, the Xerox copy provided to me by the J. Allen Hynek Center for UFO Studies, documents retrieved from the files of Dr. James McDonald and a couple of anonymous contributions. This wouldn’t have been possible if not for the Internet and the cooperation of the people named here… and couldn’t have been done anywhere as quickly without these resources.
Posted by KRandle at 9:52 AM

Ted Phillips supposedly had one of the definitive collections of evidence on the Socorro case - which he collected personally when he went to Socorro shortly after the Zamora incident occurred. Is he still alive? Wonder what his thoughts are on all this hubbub.

I was fortunate enough to take my family out to the landing site a couple years ago. There is a mural dedicated to Lonnie Zamora close to the site. Unfortunately, it has suffered from vandalism/graffiti.

I took several pictures of the landing site which are marked with rocks put in a circular pattern. I believe there are 3 rock patterns which indicate the placement of the landing gear from the craft. I also brought a Geiger counter but the testing revealed normal background radiation readings.

Kevin - I am glad you went back and did a cold case review of this sighting. My feelings are this case gets overlooked in the UFO community even though it went down as an "unknown" in Project Blue Book. Please continue your work on this still fascinating case.

Since i still believe there was a control group overlooking important information that involved obvious possible national security issues about UFOs that could NOT be revealed publicly then, it is STRONGLY possible that some of those reports were withheld from being in the PROJECT BLUEBOOK files and were instead sent to that control group who were busy CENSORING information that UFOs were indeed extraterrestrial in origin and were thus labeled TOP SECRET by those who did not want that kind of information revealed to the public, and would do so at all costs, NO MATTER WHAT! I still think that is indeed what happened over and over again after the Roswell UFO crash. it is very obvious to me after the actions these individuals took in denying and debunking all the various sightings and evidence all those many years.

There were 4 rock patterns, and 4 landing gear. La Madera is mostly considered a hoax by those who looked into it, and it appears as such to me.

Said nothing here endorsing the Madera case... it is important for the description of the melted soda bottle found on the site because that demonstrates that the Kries and Kratzer testimony is probably fabricated.

Yeah, I never put a lot of stock into them being a witness.