Brian Bell, who visits here with some regularity, and who often provides information and leads that are less than helpful, came through this last time. He suggested that the inverted V with the three lines through it was an old alchemy symbol. He provided a number of references, and sure enough, that symbol did appear, through rarely, on various charts. It represents amalgam, which is made up of mercury and another element.


The problem for us here, is that the inverted V sometimes is shown with four lines through it. This is also called amalgam. The four-line version is also part of the “Fire” element.

But this post actually goes beyond just this symbol. The San Roman Document, which is the alleged source of information about the Sacambaya treasure, has three symbols on it. So far, in the Treasure Quest search for that treasure, no one has bothered to tell us what the symbols mean, or if they are of importance.
The inverted V with the three circles, one at the apex, and one each on the legs, is also an alchemy symbol. It represents alcohol, or ethyl alcohol. I don’t know what the relevance to the treasure would be, but that symbol is clearly represented, and isn’t all that rare. 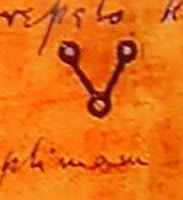 The third symbol which is a pyramid of balls, is the alchemy symbol for gravel. There is a variation of it with a cross at the top, which also represents gravel. And there is another variation in which it is called sand. Like the inverted V with four bars, this symbol is also associated with fire.

The San Roman Document is in Latin and I haven’t even tried to translate the parts we see on the screen. I just wonder if there isn’t something more hidden in it that might provide clues. I don’t believe what they have is an original, but, according to C. H. Prodgers, they have a copy of the original. We don’t know how accurate it might be. 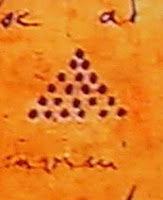 "The San Ramon Document is in Latin and I haven’t even tried to translate the parts we see on the screen. I just wonder if there isn’t something more hidden in it that might provide clues."~KRandle

I got good news and bad news on that. The good news is: my mother is a (retired) Latin professor and I sent it to her. The bad news is: the writing is so sloppy she couldn't make much out of it. Some of the translation she read back to me: "One collected....to be prepared.....Diana with.....I doubt....I place upon"

Sorry there isn't more. If there is a typed up version anywhere I can send it to her. As you may/may not know: context is very important in Latin. IIRC, you can have some of the same endings that mean different things. So it may not be enough to have just words/bits and pieces.

We can't preclude the possibility that Zamora was so started he may be misremembering something and came up with that. Who knows for sure. As I stated in the other thread: I believe him. I'm just not certain what he saw (and cannot rule out something terrestrial).

As I mentioned beofre, I found those Alchemy symbols a few year back and mentioned it here (unless that post was delelted). Just because an inverted v with 3 bars is an alchemy symbol, that in no way shape or form means that the symbol on the craft has anything to do with alchemy. The way that Hynek drew it is also not with the 3 bars through the inverted v, it was a line above, a line in the middle of the /\, and a line below, as found in the National Archives by Ray Stanford with James Fox. I still believe it may be a radiation warning, or it says "eat at Joes". But, and I am not sure why Kevin mentioned it, this was no hoax. Among all of my on site interviews and field investigation I uncovered a lot of information pointing to a real landing of an unknown vehicle, zero evidence of a hoax.I also found, and published in my Mufon cover 2 part story, a letter from C.B. Moore, Professor of Atmospheric Physics and Chairman, Langmuir Laboratory at New Mexico Tech that states" In regard to the unidentified siting by Officer Zamora in 1964, I have investigated this on my own and can assure you that there is little probability that it had anything to do with students or the Intitute."
Soon we will all know more about this facinating case as Lonnies wife has recently spoken for the first time in over 40 years,and the erased symbol on the drawing made at the time by Baca was indeed, an inverted v with 3 bars.

Well then you aren’t alone in recognizing the drawing under discussion is notably an alchemy symbol. Most are not even aware.

However, that symbol really looks nothing like a radiation symbol of the standard kind used (by humans) in the 1960’s or otherwise.

What makes you think it’s a “radiation warning symbol”? Zamora was never exposed to any radiation (that we know of) or are you assuming he was too far away to be affected yet close enough to see the symbol in all its vivid clarity?

Regarding Zamora’s wife — she’s old now so be careful about how she remembers things. With all the people who have attempted researching this, despite Zamora’s rather quiet nature about this incident, there’s bound to be some distortion in memory unless we are now claiming every old person who knows something about UFOs is lucid till the day they die.

And what sort of revelation awaits us? Is she going to divulge the secrets hidden by Zamora all these years? The REAL symbol not the 3-4 different ones claimed to be “the real deal”? Perhaps she’ll reveal what the aliens in white coveralls (the creatures) looked like?

Seems Ufology has a bright future ahead of it with new and amazing facts coming to light!!!

First, after extensive multi-year forensic analysis we’re going to finally learn the truth behind the Roswell incident all written down in precise detailed fashion in Marcel’s personal journal. I can’t wait!!

Then we’re going to finally learn the truth behind whatever Zamora REALLY saw from his wife, an aged second hand non-witness who will divulge the secrets of the universe. Wow!!!

What a bright future this hobby has!!