The other day I stumbled into an episode of Expedition Unknown that was investigating the Socorro UFO landing of April 1964. I would have ignored it, except it seemed to suggest that the UFO was, in fact, terrestrially based, meaning it was a misidentification of something made on Earth. The investigators were impressed with the idea that the UFO was a lunar landing being tested at the White Sands Missile Ranch at the time and they produced a document showing those tests.

The problem was that the times didn’t match. The sighting, by Police Officer Lonnie Zamora, was about 6 p.m. on a Friday night. The document suggested the testing much earlier in the day. You can see that for yourself here: 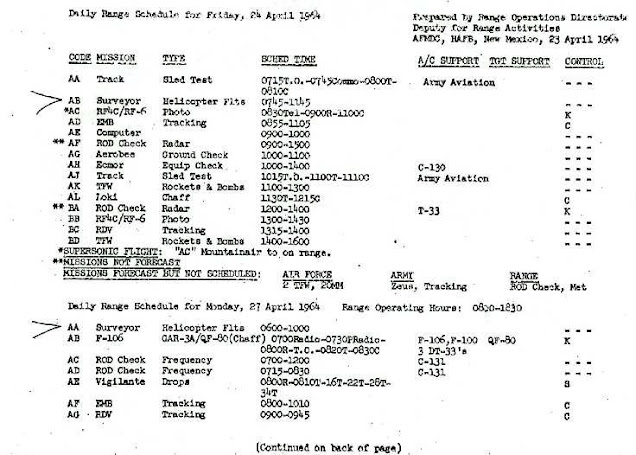 For the tests on April 27, these are irrelevant. All it demonstrates is that there were scheduled tests on the range and there were no corresponding UFO sightings.

There were mentions of the landing gear impressions that Zamora found. These were documented by the military that night. Captain Richard Holder requested assistance from the military police to first guard the site and later to make measurements about the landing traces. That documentation appears in the Project Blue Book file. The illustration shows an asymmetrical landing gear, which, I believe is the result of the terrain, meaning that the uneven surface gives the impression of asymmetry. If it had been a flat surface, then the landing gear would have been symmetrical.

Here is the problem. There are various models of the surveyor and there is no indication which was being tested in New Mexico. There might be a surveyor that has landing gear that more closely matches that of the markings found by Zamora.

In a point that isn’t all that important, they suggest they might have found a corporate logo that matches that seen symbol by Zamora. They said, during the program, that Zamora had drawn the symbol from memory, implying a passage of time. But, according to Zamora, he made the drawing within minutes of the UFO taking off and that drawing is available in the Blue Book file. It does not resemble the corporate logo very closely, though the investigators in the show were impressed by it.

In the Blue Book file, there is another corporate logo that more closely matches that which Zamora saw. It is not an exact match and it does stretch credulity to claim it does, but it is closer than the one shown on the program.

Finally, they displayed an illustration, drawn by Dave Thomas, that shows an OH-13 helicopter used to suspend the surveyor under it. This contraption might be what Zamora saw, except that he never mentioned a hovering helicopter.

On the show the two investigators pointed out that there was a two-man crew in the helicopter and Zamora had reported seeing two beings on the ground. I can think of no scenario in which both pilots would leave the helicopter with the blades turning and the engine running. One would remain behind, which is another reason to reject this theory.

At the end of the segment, it seemed that all agreed, that is the two investigators and Dave Thomas, that the Socorro sighting have been solved. The surveyor straying off the Missile Range, held aloft by a helicopter, was what Zamora saw. Well, of course, I wasn’t convinced, which set off this investigation.

As noted, the landing gear impressions don’t match, the range times for testing the surveyor don’t match, the theory that the object was a surveyor carried by a helicopter doesn’t come close to the description offered by Zamora, and the corporate logo isn’t a match. In other words, there were too many unanswered questions.

My first step was to look all this up on Dave Thomas’ website which can be found here:

It’s clear from that website that the solution for the case isn’t quite as solid as presented. According to Thomas:

Of course, this new evidence is far from conclusive (emphasis added). A lot has happened since 1964, and it's difficult to reconstruct events from that long ago, especially events with strong implications. Was it a college prank? A hoax? A balloon? An alien craft from another world? Perhaps we'll never really know. Gildenberg is confident that William of Occam, of Occam's Razor fame, would think kindly of the Surveyor explanation, especially over some of the other contenders.

I reached out to Dave Thomas for his impressions, rather than just relying on that had been broadcast and what was found on his website. He responded, telling me:

I would describe the WSMR Surveyor log Duke Gildenberg found as at least tantalizing evidence.

It's my understanding that there might have been more than two people involved, two to stand in for astronauts controlling Surveyor rocket jets, and one or maybe two pilots for the helicopter itself, which was required because of Earth's 6x gravity.

It would have been a strange looking device, indeed. Of course, it's not 100 percent Surveyor or the Lunar Excursion Module (LEM). There are former Tech students swearing by the playing with dynamite explanation, and then there are locals like Ron and Dorothy Landoll, who heard a fresh description of the craft from a police colleague of Zamora's, and later realized its similarity to the LEM when it was publicized in 1965. When I interviewed Stirling Colgate about his report of a student-led hoax, he unfortunately couldn't recall anything about that incident, and has passed away since.

While we don't know for sure what Zamora saw, I think he honestly did see something strange that day. I don't think it was extraterrestrials, however, that would require much stronger evidence to get me onboard.

Please note the language used here. There are qualifications in it, and in a discussion such as this, we all use qualifications. Nothing is written in the absolute, rather there is a suggestion that an extraterrestrial explanation is not the likely solution and given that we have only witness observation and landing traces, that is understandable. To be fair, to reach the extraterrestrial should require more concrete evidence. However, none of the other solutions offered, and over the years there have been several, have been proven.

I will note here, that Thomas interviewed Stirling Colgate, who, in other communications, didn’t seem to support the idea of a student hoax, which had also been offered as the solution. I draw attention to that here, only because Thomas mentioned it without any prompting from me.

In the end, we’re left with a sighting that is unexplained. I have covered parts of this in the past, and it is reported in great detail in Encounter in the Desert, which is about the Zamora sighting.

This contains a list of other relevant articles as well as being a good synopsis of the investigation.