Coast to Coast AM - Levelland and Sightings

The Internet is a wonderful tool. It provides us with the totality of human knowledge. Such is the case in and around Levelland, Texas, from November 1957. My pal, Rich Reynolds, at his UFO Conjectures blog, reported on October 6 of this year that a video of Sheriff Weir Clem, the Hockley County sheriff, meaning, of course, Levelland, as well as other witnesses, had been interviewed by a reporter in 1957. All this before the Air Force investigated. You can watch those interviews here:

Levelland was the scene of several UFO sightings in which the craft stalled car engines and dimmed headlights. As but a single example, Newel Wright, a nineteen-year-old college student at Texas Tech in Lubbock, was nearing Levelland when he glanced at his dashboard ammeter. Wright told the Air Force investigator, "I was driving home from Lubbock on state highway 116 at approximately 12:00 a.m. when the ammeter on my car jumped to complete discharge, then it returned to normal and my motor started cutting out like it was out of gas. After it had quit running, my lights went out. I got out of my car and tried in vain to find the trouble.

“It was at this time that I saw this object, I got back into my car and tried to start it, but to no avail. After that I did nothing but stare at this object until it disappeared about 5 minutes later. I then resumed trying to start my car and succeeded with no more trouble than under normal circumstances."

There were others who independently reported similar experiences. The UFO remained in the area for about two hours and witnesses reported watching the UFO for several minutes before it would lift off and leave the immediate vicinity. Once the UFO disappeared, the witnesses reported their cars could then be started. I have reported on all these sightings in depth in the book, Levelland.

And, in conflict with the Air Force report, the sheriff said that he saw an oval-shaped, brightly glowing object as he searched the area. He was accompanied by other law enforcement officers and there are indications that Air Force officers were there with him as well.

The sightings in the area didn’t end on November 3. Sightings of the UFO continued in New Mexico, stalling more cars. Military Police at Whites Sands also had encounters. The series of sightings are an important part of UFO history and have never been adequately explained, though the Air Force claimed ball lightning was responsible.

Moving into the modern world, on July 9, of this year, the witness and his family were water skiing in the Spencerville, Indiana, area. The main witness had stopped the boat to pick up his son who had fallen and looked toward a tree line on shore. He saw a white, round object travelling east to west at a high rate of speed. He said that it was moving faster than anything he had ever seen and was in sight for a minute or two. Both his son and wife saw the UFO as well.

The witness also operates MADAR Node 81 in Spencerville. Although there was no alert, a review of the recorded data showed a spike in the magnetometer, that is an electromagnet effect, at the time of the sighting. This also relates to the Levelland sightings in which there were reported EM Effects.

The investigation showed that object the witness reported was too slow for a meteor and too fast for an aircraft. He heard no sound associated with it and believed that it had been flying at about 10,000 feet. The witnesses saw no wings, or vertical stabilizer.

On October 6 of this year, the witness in Palm City, Florida, said that he saw a straight, long, white object that was not moving. He said, “The object appeared… to be bigger than a plane I’m flying… it did not move like a plane.” The UFO was in sight for about a minute. The witness said that he looked down to check his airspeed and when he looked back, the object was gone.

From Lynwood, California, on October 5 of this year, the witnesses saw what looked like fireballs. Five of them were close together and the sixth some distance off. The one farthest away was moving rapidly and changed color from orange to green. The witness reported that it had a cylindrical shape and was moving super-fast. The sighting lasted for a total of fifteen minutes.

The witness did take the following photograph of the UFOs. I have cropped the photographs to fit better on this space. 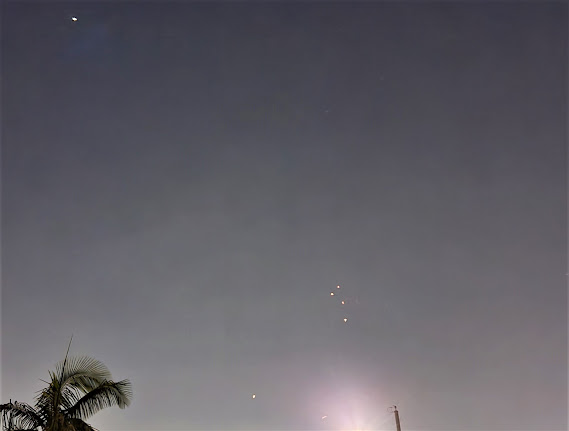 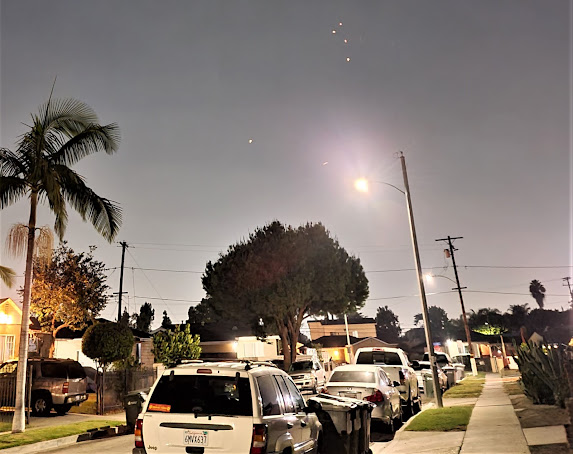 Photographs are courtesy of the National UFO Reporting Center and the photographers.The upper photograph has the cylinder in the upper left and the bottom photo is the street scene with the formation of lights.