Let’s talk about Major Edwin Easley (seen here), who, in 1947 was the provost marshal at the Roswell Army Air Field. That is, he was the top cop, sort of the chief of police, responsib

le for base security, patrols of the town, investigation of crimes, and any other security measure that the base commander, Colonel William Blanchard, might have had for him. If there had been a UFO crash near Roswell, Easley would have known about it and would have had some role in the recovery operation, even if that role was only providing security on the crash sites.
The debunker triumvirate of Phil Klass, Karl Pflock and Kal Korff are quite dismissive of Easley, spending little or no time with his story. They seem to be of the opinion that he is of little value and that what he told me in several interviews is irrelevant because it is unsubstantiated and uncorroborated. Such is not the case.
(And, if I might go off on a tangent here, I use the word debunker, not in its normal connotation, but as it has become applied to the rabid disbelievers in the UFO field. Debunker means someone who will not change his or her opinion about the possibility of UFOs regardless of the evidence, just as the true believer will accept anything and everything, regardless of the evidence. Debunkers and true believers are at opposite ends of the spectrum but are equally unwilling to examine evidence.)
Phil Klass, in his anti-Roswell book doesn’t even mention Easley. Karl Pflock (seen below), in his, mentions him a number of times, mostly as identification of who he was and his job in Roswell in 1947, meaning simply that he was the provost marshal. Pflock does write in the one place, "...Roswell AAF provost marshall [sic], told Randle that Brazel ‘was kept under guard in the [base] guest house

for a number of days."
Pflock also wrote, "All this [meaning the story of Brazel at the guest house and Brazel under military escort] seems quite impressive until we learn that Randle did not record his interview with Easley and has no independent verification of what he recalls the now-deceased officer told him."
Kal Korff has the most to say about Easley, but doesn’t get things exactly right. Korff wrote, "Randle claims that Easley on his deathbed eventually confessed that not only had he ‘been there,’ but that he had also seen alien bodies. Indeed, the authors [Randle and Schmitt] write, ‘Easley was reluctant to talk of bodies, but finally, before he died, said that he had seen them. He had been close enough to them to know they weren’t human. He called them creatures.’"
Korff continued, "There’s a problem with Randle’s claim about Easley’s alleged deathbed statements. To be blunt about the matter, Kevin Randle was not present when Easley was dying, only his family members were. This means that Kevin Randle is not in a position to comment about what Easley supposedly said because he wasn’t there.
"The truth of the matter is that there is no evidence other than Kevin Randle’s ‘word’ that Major Easley either said or did the things that Randle claims. And because Major Easley is deceased, he cannot be questioned on the accuracy of Randle’s comments.
"When I checked with the Center for UFO Studies, where Randle and Schmitt claim that all the interview tapes and documentation for their research are archived, it turned out that there are no tapes or forms of independent documentation or verification on file proving that Easley indeed had made the statements Randle posthumously attributes to him! Researchers Robert Todd and Stanton Friedman have also tried to obtain similar supportive evidence for many of Randle’s other claims regarding his research into Roswell but have been unsuccessful.
"Even if Kevin Randle is telling the truth regarding what Easley told him, there is a very valid reason to call into question any remarks that Easley might have made. According to Easley’s family, he was quite advanced in age when he spoke with Randle. His memory was failing him and Easley had a tendency to place himself in events at which he was not present."
Korff footnotes this with, "Kal Korff interview with Dr. Harold Granich, Easley’s physician, July 16, 1994."
In conclusion, Korff wrote, "Once again, until Kevin Randle is ever able to provide evidence and/or documentation to back up his statement, Easley’s alleged deathbed remarks cannot be considered as credible evidence for the extraterrestrial nature of the Roswell incident."
So, we are treated to two divergent views. We can ignore Phil Klass because he ignored Edwin Easley. Let’s look at what Karl Pflock has to say, remembering that Pflock never talked to Easley, never interviewed him, and is left with his impressions based on the work of others, most notably me.
Easley, in an interview with me, conducted from the offices of the Center of UFO Studies, told me that Mack Brazel, the rancher who brought in the debris had been held in the base guest house for a number of days. Is this uncorroborated?
No. Bill Braz 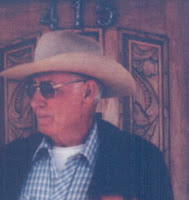 el (seen here), Mack’s son, told me in personal interviews, including those that were recorded, that his dad had been held in Roswell for several days. Bill said that he had gone to the ranch and his father didn’t return for two or three days.
Marian Strickland, a neighbor to Brazel, told me, and is recorded on video tape, that he sat in her kitchen and complained about being held in jail. While the base guest house isn’t exactly jail, if you are not allowed to leave, it is the same sort of thing.
So, in reality, we have Easley’s statement and we have the recorded statements of others. Clearly Brazel was held in Roswell, and the importance of what Easley said, was that he was held in the guest house (seen below). This seems to be corroboration of what Easley told me.
Pflock also laments that I didn’t record one of the interviews with Easley and in reality, that was a serious mistake. At the time I talked to Easley, he was in good health and I planned to meet with him in person to corroborate all those things he had said. Dr. Mark Rodeghier of the CUFOS asked me to arrange a meeting between him and Easley and I attempted to do just that. Unfortunately, this was after Easley became seriously ill and a very good opportunity was lost.
Korff is the one who takes this the farthest, but his reporting is as flawed as the others. First, he is worried because I wasn’t there, in Easley’s room, to hear his statements. This, he believes, somehow negates them. But, if this is true and we are not allowe 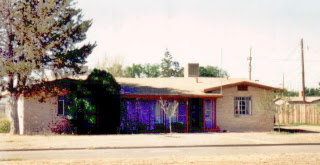 one wonders why, if the answer about the UFO crash is mundane, Easley would have been ordered not to speak about it. (And no, Project Mogul doesn’t work here because, two days after the press release claiming that the RAAF had captured a flying saucer, pictures of a Mogul array were printed in the newspapers... the equipment and launches weren’t classified, just the name and the purpose, something slightly different than the debunkers tell you. Pictures ofMogul in the newspaper in July 1947.)
I have a statement written by Easley himself that says, "This is information on the 1947 incident north of Roswell, New Mexico, AFB. Being sworn to secrecy, I could not and did not give any information to the investigator. This case was presented on T.V. Unsolved Mysteries in September 1989." It’s quite clear here what Easley meant and this is another bit of corroboration and documentation. Stan Friedman can confirm this.
Here’s where we are. No one interviewed Easley except me. I have tapes of some of the interviews, but I don’t of the one where Easley confirmed the extraterrestrial nature of the craft. Family members did hear him say things about the craft and bodies, and some of this discussion took place prior to his eventual decline and death in the hospital. Believe me or don’t, but this doesn’t rest on my shoulders alone. There are others who heard the statements and have reported on them. Attempts to dismiss Easley’s testimony are simply that, attempts to dismiss his testimony. They are without substance and are made because we all know that a UFO didn’t crash at Roswell and anyone who says it did must by lying, deluded, or both.
Posted by KRandle at 2:49 PM

With your last two entries, especially, you are illustrating the very points and methods that are required of this case.

Since the official release of information given to us by the Armed Services, via the Air Force PBB info, appears to contain "0" bits of data pertaining to it (but plenty on the LaPaz stuff), whatever backing up of each portion of the evidence that is available is all that we have.

The only parts of the information that can be used are be the ones that have verification, of any kind... such as you have provided.

All other information should and will be discarded, or held off vending further corraboration.

I met Edwin Easley when he retired. 1978? He would not give interviews to the press but in his own home it was different. I spoke with him at length about those few days in 1947. He said there were two craft, one that exploded and a second that crashed on a ledge about 2 miles away. The smaller, maybe a probe of the larger craft had exploded. Since there was a violent thunderstorm it's possible that as it approached the larger craft possibly to be retrieved, it was hit by lightning. Exploding into the manned craft sending debris onto the field from the probe and the manned craft out of control. It then dug the trench as it skipped off the field and finally crashed for good on the ledge. He stated there was a gaping hole in the side of the craft large enough for him to poke himself through to his belt buckle. He described the interior in reasonable detail. He also drew a picture of the craft, it looked remarkably like the one in 'Independence Day'. He immediately burned it. He then later got to see the 'bodies' including one hanging on for life. When I asked him "They allowed you to see everything?" he replied, "What were they going to do? Call security? I was security. I had an entire company that had followed me through the Battle of the Bulge, armed with rifles. They had a couple of officers with a sidearm that had probably never even fired the things. So yeah, I stuck my face wherever I wanted to, until the big brass showed up later." I will never forget him saying that. It was obviously his moment of pride.