I am probably one of the worst people when it comes to promoting my work. I think that others should do that and that each book should generate interest because of what is in it rather than what I have to say about it. But, sometimes, there are reasons to promote what I have written… and sometimes it is important to report what others have done to make the book even better. 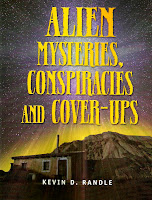 Such is the case with Alien Mysteries, Conspiracies and Cover-ups. One of those who was helping find illustrations made a telephone call that I hadn’t thought about. He found a photograph that I didn’t know existed.
Back in April, 1897, the Cedar Rapids Evening Gazette carried a story about a Great Airship that had fallen, crashed, came to rest on the fairgrounds of Waterloo, Iowa. There was a human crew, complete with a German professor, and a tale of tragedy.
There was an airship on the ground, though no one, other than the crew, suggested it have ever been off the ground. After hours of telling the story to all who would listen, one of the men was recognized as a Waterloo resident and the tale collapsed. The hoax was exposed.

I had an illustration that appeared in the Cedar Rapids newspaper but since this was a hoax I never made the trip to Waterloo… oh, but I should have. Imagine my surprise and I first saw a photograph of the Waterloo airship from their newspaper, the Waterloo Courier. Not a drawing, wood cutting, or illustration. An actual photograph of the airship sitting in the bright sunlight of the nineteenth century.

As you can see, the Gazette drawing is accurate, but then, it’s not the same as a photograph from the Courier… which might be the only photograph of one of the Great Airships… and please note that I said, “Might.”
The point… the photograph appears in the book. It isn’t the only photograph. There are many, but it was the one that stunned me when I first saw it. Just never thought there would be an actual photograph… but it does suggest something about research. There is always another stone to be turned over, another archive to search, and another government office to deny that anything is out there.
For those interested, the book Alien Mysteries, Conspiracies and Cover-ups, should be available about now.
Posted by KRandle at 5:48 PM

If the photo wasn't available the drawing suggests a kind of landing craft, carrying troops about to land on a beach.

The photo depicts two ellipsoids, presumably hollow and filled with a gas.

Neither suggests a visiting ET craft. Any ideas on this?

The drawning looks like the photograph, just from another angle. Never suggested this was alien, ever, in all the places that I have referenced this case. It was always an admitted hoax. I'm surprised you missed that.

Beat me in my own backyard. I will confess when I learned it was a hoax, I just never followed up on it. You fund the photograph long before I did...

I am still shocked, shocked I day, that there was a photograph, given the time... but then there are thousands of photos from the Civil War, which took place 30 years earlier.

The Rocket Scientist in me couldn’t help but analyze the “airship” in the pthotograph. Each gasbag on the contraption is a little over 4 times as long as it is in diameter. Judging by the individual standing closest to the contraption , I estimate the maximum diameter to be about 7 ft. Approximating the shape as a cylinder that is both shorter than and smaller in diameter than, the actual gasbag, I calculate the volume of each gasbag as about 500 cubic feet. Since there are two bags, the total displacement volume is about 1000 cubic ft. In that era, I think it would have been almost impossible to obtain Helium in large quantities, whereas Hydrogen had been in use as a lifting gas since at least the Civil War. So, 1000 cubic ft of Hydrogen supplies no more than about 70 lb of lift. Seventy poiunds of buoyancy would have to support the weight of the gasbags, the kerosene powered lantern on the bow, the sternhouse and motor, the propeller, and of course, the pilot himself.

Bottom line—this contraption could not come close to getting in the air. Also absent are any rudders, elevators, or other control surfaces which would be necessary for controlled aerial flight.

And yet, it was real; someone built it. I would suggest that it was actually a pontoon boat, with airscrew propulsion (like a swamp buggy).

BTW, similar calculations and considerations show why the Socorro craft described by Zamora was also not a lighter-than-air craft.

....as a 'retired' Rocket Scientist', I must heartily agree with the post by 'Larry' - after almost 38 years of UFO research, I have found that "gasbags" comprise the backbone of the the pontificating UFO Expert Class....

I notice is isn't flying and doesn't appear large enough to fly.

Larry beat me to the punch, noting that the craft is much to small to be a lighter-than-air craft. It couldn't have lifted itself much less a crew.

What's interesting is that they had a REAL and sizeable craft as part of their hoax, a bit too much to build simply for a hoax, and the suggestion by Larry and CDA that it was a pre-existing water craft of some sort makes sense.

One lesson here is that something shouldn't be dismissed out of hand as unreal just because it doesn't pass one's personal belief test. There's a case where airline passengers reported a flying elephant--yes a flying elephant. Obviously this was a mass delusion, with the psychosocial crowd, probably theorizing they were psychologically influenced by Disney's Dumbo the Flying Elephant cartoon.

Turned out it was circus helium balloon elephant that had gotten loose. So the passengers were indeed accurate in describing a flying elephant, even if not a real elephant.

Take home point is that witnesses are usually accurate enough in their descriptions that something mundane can usually be found to explain it.

You understand that this is an admitted hoax. When one of the crewmen was recognized as a local man, they admitted it was a hoax. This thing never flew. It was erected on the fairgrounds as a hoax. Can't make it any clearer than that.