Video on the I-Beam

Although I do not wish to get involved in a long discussion about the nonsense of the Alien Autopsy, I had mentioned that the word, “video” in a stylized form appeared in the tent footage. Without taking a great deal of time on this, I found a photograph, published in Roswell Alien Autopsy by Philip Mantle, and published Noe Torres at RoswellBooks.com, which I mention in case anyone wishes to see the evidence about the film laid out carefully and precisely. 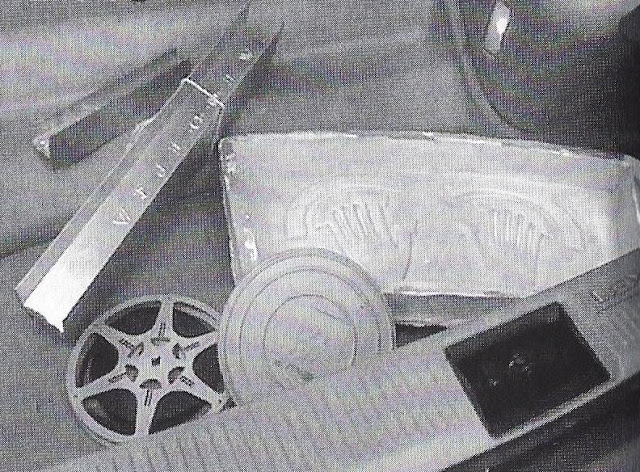 First is the whole picture that appears in the book. It shows the I-beam with the word on it, together with other bits and pieces that were claimed to be part of the wreck and some material that clearly was not. Seems strange that all of this would be mixed together unless it was part of a hoax. The government certainly would have had no reason to put all this material together in one place. 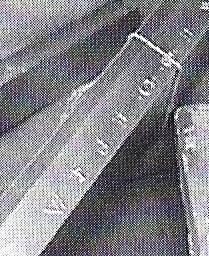 This is a cropped version that shows the word a little bit clearer, but certainly not as clear as it appeared in the tent footage. The “E” in video is quite stylized but the other letters are close to our alphabet. For those who wish to see a better picture, I’m sure someone can find it on the Internet. These pictures are copyright by Philip Mantle and Noe Torres.

Thanks to both of you. Mortem Foray shows it the best. The word is stylized but is clearly V I d E O... It should be obvious to anyone looking at it. What are the odds that we'd find an English word in something of supposedly alien manufacture when there are literally dozens of written languages on Earth that look nothing like one another?

You can always argue that the ETs were so clever that they crashed their craft in an English-speaking country. They also knew years in advance that 'CEIV' would one day become the terminology for a UFO with occupants, and that the word 'video' would also become part of the language. The one thing slightly irregular is the lower case 'd', the other letters being upper case. Apart from this small blemish, the ETs must be congratulated on their amazing forethought.

If only they had chosen the UK.

Hadn't noticed the CE IV before now... that makes it even worst because it moves the date from 1947 to sometime in the 1980s where Hynek's Close Encounters system was updated to include abductions.

The aerospace engineer in me has to point out that these I beams are actually H beams--the difference being that the width of the top and bottom flanges is nearly equal to the height of the central web. I beams were invented because they represent an ideal or optimum solution to providing maximum bending stiffness for beams used in the build up of a truss structure with the minimum weight. H beams were invented to represent a near optimum solution for the case where you need a beam to span a given distance and you are going to support either flooring or a ceiling surface from the beams. So If I had the time I would look for an architectural supply catalog that stocks 2 and 4 inch thin section Aluminum H beams and I bet you could find a pretty good match for what's shown in the photo.

All,
The beams shown in the trunk of Santilli's auto do not match
the beams in the AA. It's is just by chance that the letters resemble
the word "video". The so-called confession by Ray and Gary and John
is a farce. Have any of you bothered to view the entire documentary?
Is that what you call evidence?
John said that he produced the creature from footage Ray supplied, but Spyros claims that he created the creature from his own imagination. Don't you think it's important to know which is which? John also was said to be the main pathologist.
John is left handed and the pathologist was right handed. How could that be?
Also, Spyros needs to supply a time line for all these various projects and how they all fit with reality.
Spyros met Ray the first week in April, 1995 at Cannes, but didn't meet with him until later in London. Ray had been describing the creature for at least a year before that.
But Spyros isn't mentioned as part of Santilli's crew until after summer of 1996.
Not one word! The point I'm making is that Spyros didn't have the time or opportunity to create a fiberglass alien.
Spyros is an illusionist and you are all his marks.
Ed

Since I opened the topic, I've allowed you to respond. What you don't understand is that many of us have investigated the nonsensical Alien Autopsy and found it wanting on so many fronts. Here's a question for you. Since this was supposedly a real autopsy, and all those who participated would have high security clearances, and the names of all those involved were known to the military and the government, then don't you think that they also know who the cameraman was? Santilli's failure to release the name is just another dodge because without the cameraman you have no provenance. You have an admitted hoax that you refuse to accept.

Kevin,
The cameraman was a private contractor. He was not
a military photographer but a private contractor
and worked for both "Forces", Army and Army Air Force.
He had been in the military, but as a member of the
First Motion Picture Unit which made propaganda films for the
Army. He may have been contacted by the government before he died in
Aug 1995.(this caused a problem for Ray) I've given you his name on several occasions, but you're so convinced that the AA is a hoax, that you seem blind to other possibilities.
I think you're a good researcher, but you're wrong about the AA.
Don't you think , if the AA were true, that government agents would pay Ray and Gary a visit, and try to suppress this information?
That's what's happening in the Eamonn documentary and all the other attempts
by Ray and Gary to confuse the situation.
Why not research the cameraman yourself. I'll give you his name and other information I have; you can check it out and perhaps change your mind about the AA.
Ed

@Ed, why don't you give the name to everyone. Then you can crowdsource the research.

Rusty,
I'll give the name to anyone who thinks they can
add more information to a common understanding
and won't freak out or scare off members of
his family. His son is still alive, as far as I can tell
and I know the son has visited the crash site
and knows other details. I don't have a compelling need to
do all this alone so if others want to get involved,
that's OK with me. It's just that Kevin has an access an contacts
not open to the rest of us.
Ed

Come on that was a more staged photo than the Ramey weather balloon one! When I called Spyros out on the hand panel not matching he suggested it may have been the original mold.
Clearly we are dealing with amateurs here who think they can pull the wool over people's eyes because they will never question anything.

Hi All.
The picture you show here is from a TV Doc that Shoefield and Santilli had a hand in. It was called Eamonn investigates alien autopsy.
As usual Ed is WRONG...They are the actual pieces as given by me to Santilli. The language seen on the beams are a mixture of English, Greek and Egyptian styling. Actually the debri pieces were all designed by me and John. The words indeed the shapes of the items have a firm rooting in Magic history and optical illusions. All of this is explained in great detail with examples of this in historical documents. Be that as it may, The beam that reads VIDEO when turned upside down. This is called an 'Ambigram'. In this case, It reads VIDEO one way, and ELEFTHERIA the other way using the same letters. Eleftheria means FREEDOM in Greek. My thinking was most people would think the word VIDEO is a modern word and cause them to think this was a modern day film and therefore a fake, but an educated person would point out that Video is Latin and a very old rooted word. Eleftheria, seemed like a wonderful concept to name ones ship, or boat or in this case a spaceship. Although Ed maintains that the bits in Santillis trunk are not the same, they are. In my book I also reveal the entire footage of the Debris frame by frame BEFORE it was aged by me. My camera original is VERY clear and shows a lot more detail than the film we released into the public domain which I washed out and aged heavily and as a result, shows a lot less detail. I'm happy to amswer any questions you may have. All the best, Spyros.

You're not going to get anywhere discussing the props from the Ant and Dec Alien Autopsy movie as that is what the stuff is in Ray's car boot. It was recreated for the movie from the designs used in Spitz's AA footage. Unfortunately Spitz over egged his recreation footage in a few places, I say this because the original "video" beam he based his version on didn't have those raised symbols it actually only had the simple surface features as described by many of the original Roswell witnesses. ie here's the original beam.