John Steiger inadvertently launched an investigation when he provided a link to the headstone for George Paonessa at the Arlington National Cemetery. I had wondered, if Flight 19 disappeared without a trace, then how could there be a 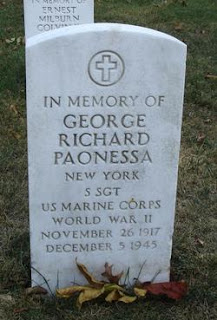 grave for one of those lost in the disaster.

Today, I received an email from a family member that ended this one, rather minor part, of the overall mystery. He wrote, “Hi. My Aunt Louise, who has since passed away, was the one who wrote to Ogden Reid the United States Representative from Westchester County & that's how the head stone was put there.”

While the aspect of this case re: the placing of the headstone in Arlington National Cemetery appears to have been resolved, another aspect remains unresolved: Namely, what is the correct date of death for S.Sgt. George R. Paonessa of Flight 19? ... Did Sgt. Paonessa actually die on or about December 5, 1945 when his Flight 19 plane crashed OR did he parachute out and survive, leave the Marine Corps behind, and go on to establish a successful construction contracting business in southern California (and pass away much later on) as Jon F. Myhre claims in his book Discovery of Flight 19 as related by Douglas Westfall in his interview with Kevin Randle on X-Zone Broadcast Network. It appears this remains to be determined ...