As many of you know, especially those who visit here regularly, I sometimes chase footnotes because it provides, well, a different perspective on some UFO reports. Finding the footnotes to chase isn’t all that easy and it is usually the result of researching another aspect of the UFO field. Sometimes, however, it can be a single reference in a book or article that triggers a question or two.

Such is the case of an article in the September 2019 issue of The MUFON Journal. Yes, I touched on this in the report on my interview with Don Burleson, and I don’t mean to target him here, but there is a point that needs to be made. As noted, you can hear our discussion in the last half of the October 9 interview.
The statement in question, the one that caught my attention, and frankly the attention of some others, said:

April 24, 1964, when Socorro policeman Lonnie Zamora saw an egg-shaped, whitish object down in a gully and observed a red symbol on its surface. As investigator Ray Stanford discovered, authorities soon published an altered version of the symbol in order to guard against copycat reports, but area military pilots would have been given a classified briefing to warn them to be on the lookout for any airborne craft bearing the insignia the way Zamora had really seen it, an inverted V with three horizonal lines through its middle. Clearly the Socorro object and the Holloman object were somehow related, though I [Don Burleson] infer from various details that the Holloman object was probably larger.
The problem here is that there are errors in the thinking and speculation that is presented almost as if it is fact. The first real problem is the claim that the correct symbol is the inverted V with the three lines through it. This is the information supplied by Ben Moss, Tony Angiola and Ray Stanford. The trouble here is that Zamora drew the correct symbol, that is an arc over an arrow with a line under it on two occasions. As the object departed, he drew the symbol on a scrap of paper and that scrap can be found in the Project Blue Book files. He signed that illustration.

On the evening of April 24, Zamora was interviewed by Captain Richard Holder of the Army and Arthur Byrnes of the FBI.  They suggested that Zamora not reveal the symbol to others to eliminate copycats, but he did draw it for them and he signed that image as well. This was what I think of as the umbrella symbol.

During the initial investigation, other military officers were involved during the investigation and they too, filed reports. In those documents, the umbrella symbol is identified as the true symbol.

Interestingly, Ray Stanford who was on the scene within days sent a letter to Richard Hall of NICAP in May 1964, a week or two after he had been to Socorro. In that letter he not only identified the true symbol as the umbrella symbol, but wrote that the inverted V with the three lines through it was the fake. Ten years later, when Stanford published his book, he had switched the symbols, now claiming that the inverted V was the true symbol.

Zamora had an illustration made of the craft that he had seen. The Socorro mayor thought it might be a good idea. The artist was Rick Baca. Under Zamora’s direction, the umbrella symbol was placed on that drawing.

Both Ben Moss and Tony Angiola believed that there had been a “secret” Socorro file that was separate from that found in the official files. All these official files entered the public domain when the Blue Book files were declassified in 1976. These unofficial “secret” files were obtained from Rob Mercer. The Socorro file was 200 pages that duplicated most of what was in the official file. In that unofficial file were two cards that held the inverted V. It is clear from the context that these cards were based on newspaper articles that were released in 1964. Ben Moss and Tony Angiola believed that this was the true symbol because it was in that file.

Carmon Marano, who was the last officer assigned to Blue Book, who had the responsibility of closing down the office after Lieutenant Colonel Hector Quintanilla had moved on to a new assignment, said that the information obtained by Rob Mercer was a document put together by those in the Blue Book office to show to reporters and others who were there to do research. You can listen to my interview with Rob Mercer here:

In other words, it wasn’t an “official” document and it wasn’t a classified file about the Socorro landing. It was a briefing document for those without security clearances or who were civilians who had been granted access to the Project Blue Book files.

What this means is that a suggestion that military pilots had been given a classified briefing containing the inverted V symbol, is in error because that is not the correct symbol. I can think of no reason that such a briefing would even take place. The pilots didn’t need to know what the symbol looked like. If they encountered an alien craft and saw a symbol, they could report that. If it doesn’t match that seen by Zamora, well, it just didn’t match. We can assume here that the military pilots wouldn’t be inventing a tale of seeing an object when they did not.

However, if you’ve told them what to look for, then you have contaminated the operation. You’ve told the pilots what they should see, and that means that they might just see what you told them to see. In other words, the classified briefing has defeated the purpose set out for it.

If you read the wording in The MUFON Journal paragraph carefully, you’ll notice the qualifiers. It said, “…area military pilots would have been given a classified briefing…” I asked Don Burleson for the source of this information. What I learned, from him, is that this was speculation based on what he believed would have happened. The real point is that no such briefing was given. It was pure speculation.

Here’s the problem with this. Someone else, writing a book about UFOs or an article about the Socorro sighting, might quote this particular paragraph, giving 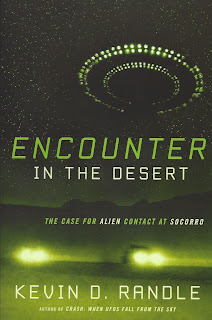 the source as The MUFON Journal article. But there is no ultimate source for the information. The discussion of the symbol is flat out wrong and the classified briefing never happened. We follow it to this point and we can go no farther.

Although I don’t discuss the “classified briefing,” in Encounter in the Desert, my recent book on Socorro, I do discuss, at length, the whole sad tale of the true symbol seen by Lonnie Zamora. Much of that has also been discussed on the blog. You can read about that here:

In the future, as others research this case, I hope that they’ll find this as well. They’ll then know that there is a problem with that information. Maybe they’ll think twice about including it, or, if the do, they’ll qualify so that their readers will understand what has happened.

I hope you do even more "chasing footnotes/references". They are very helpful.

Dr. Randle (Kevin) -- Thank you very much for this posting re: Socorro. It's a very interesting case and has provided a fairly strong forum for commentary over the years.

The real reason for this comment though is that I have a sense that the number of comments herein appears to be dwindling. I HOPE I AM WRONG AND SORELY MISTAKEN IN THIS REGARD, but this is my sense of late.

If true, then this is indeed a pity because you provide such a valuable and insightful resource re: UFOs and their history, especially when compared to most other UFO-themed resources of which I'm aware.

Wishing you all the best! -- JS

The whole situation is made clear when you say, “Ben Moss and Tony Angiola believed that this was the true symbol because it was in that file.”

In this example, we see how two ufologists falsely concluded items in a file proved a particular long held belief. A conclusion that just happened to reinforce their own preexisting beliefs. I suspect some bias was also at play with regards to which symbol they thought was actually the correct one.

It’s this type of speculation that often persuades readers to think the writer (or researcher) is actually referencing factual evidence, when in reality what’s being presented is totally incorrect.