The Demise of Ufology

(Blogger's note: Ufologist Chris Rutkowski posted this at http://www.uforum.blogspot.com/ and I thought it an eloquent description of our UFO world today. I'm afraid he's all too right about this and that do 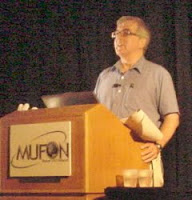 esn't bode well for Disclosure or our acceptance into the mainstream world. I'm afraid that I share his view.)
I caused a bit of a stir several months ago when I called UFO case investigation a lost art. I'll go further this time: ufology looks like it's near death.
The bad news is: I'm an optimist.
I was having a conversation with Brian Savage recently, and he made the observation that the UFO phenomenon has been derailed. He was formerly with the Alberta UFO Study Group, an earlier incarnation that produced in-depth investigation reports and scoured government documents for historical Alberta cases. Brian's comment was in reference to the many popularized UFO-related developments over the past 20 years which have destroyed the legitimacy of serious UFO research.
Examples of these derailments include the alien autopsy film, Lazar's Element 115, the strawberry ice cream nonsense, Greer's telepathic vectoring of UFOs, crop circles, exopolitics, Nibiru, and the resurgence of the contactee phenomenon. These and others have served to draw public and popular attention away from serious UFO case investigations and into the realm of wild arm-waving speculation and wide-eyed fanaticism.
It's too bad; it really looked like there was something developing there, for a while.
UFO cases themselves have radically shifted characteristics. Things seemed so simple when Hynek formulated his Close Encounter classifications: CE1 was a sighting at close range; CE2 was a trace case; and CE3 involved seeing occupants. There was no CE4 or CE5, as adopted by some ufologists now, reflecting abductions and contactee incidents. Only three categories, nicely defined and delineated.
The CE2s went extinct first. Ted Philips had several thousand physical trace cases documented by the time crop circles arrived on the scene. Then - poof! No more CE2s. People stopped seeing UFOs landing and taking off; aliens stopped landing their scout craft and leaving behind scorched patches and tripod marks in fields. Instead, mysterious circles (and later, patterns) appeared, almost always without accompanying UFO sightings, and it was assumed that the aliens were using some kind of "rotating vortex" to power their ships.
Then the CE3s went AWOL. No more sightings of landed UFOs where entities were seen exiting and re-entering their crafts. Instead, abductions ballooned in number, eventually overtaking classic CE3s. Really, have you heard of a decent CE3 case recently? No bedroom visitations, no alien faces in windows, no telepathic instructions about saving the human race. Just a simple CE3 observation. No? No.
Even CE1s are mostly gone now, too. Instead, we have YouTube videos of "mysterious orbs" and "Galactic Lightships" seeming to dance all over the pace because the witness couldn't hold the video camera steady. On the other hand, we have goofballs with too much time on their hands using video toasters to create obvious hoaxed UFO videos that experienced UFO investigators can tell are not worth bothering with but go viral anyway, getting retweeted and reblogged everywhere by UFO fans.
But a well-witnessed, well-investigated CE1 case? Rarer than a straight-talking politician or oil executive. Sure, if you look at popular UFO websites that list UFO reports, there are dozens and dozens from all over the world, posted by witnesses. But follow-up to get additional details to make an evaluation, such as direction of movement, where the UFO was in the sky compared with other things, and even an accurate time? Forget it. Onsite investigation? Impossible. Referral to one of the few reliable UFO investigators who lives nearby the witness, to allow proper investigation? Can't, sorry; privacy of witnesses is guaranteed.
So what we have in ufology today is the maintaining of a high number of UFO sighting reports, but a decrease on information content of the cases. Public attention surges when UFO stories in the news go viral, but critical thinking goes out the window.
Part of this is because no one person is viewed as someone who can speak for ufology today. Following the death of Allen Hynek, no one was easily identifiable as someone to take his mantle. (Not even Philip Mantle.) Not Stan Friedman, not Jerome Clark, Mark Rodeghier, not Jenny Randles, not Kevin Randle, not Bill Birnes, not any other of the dozen or so who might (or might not) fit the bill.
(Similarly, who speaks for debunkery? After Phil Klass passed away, is it now Phil Plait? James Oberg? James Randi? Bill Nye? Even Larry King can't decide who is an authority and whom to have on as guests to debate UFOs.)
Poor MUFON and CUFOS, the few remaining doggedly determined UFO groups. They're hanging on, with declining revenue, losing staff and trying desperately to carry on with serious UFO study, when UFO fans have not the slightest interest in that.
Ufology is greatly fractured. With thousands of UFO-related web pages, everyone (and anyone) can be an expert. Anyone can tell you the "REAL Truth" about the aliens' presence on Earth and their nefarious dealings with the government and how Obama is an alien and why I've been chosen as their emissary and why alien hybrids have pale skin and why aliens will arrive in 2012 and where the underwater alien bases are in the Gulf of Mexico and why the hundreds of orbs in my photograph are mental images of aliens and not dust particles and why some UFO craft disguise themselves as airplanes and why chemtrails are not just contrails and why this blog is passing through into another dimension....
Posted by KRandle at 11:58 AM 15 comments:

I have received new information on the Kingman, Arizona UFO crash of 1953 an it doesn’t look good for the validity of this case. Remember, this all started when Arthur Stancil told Ray Fowler he had been involved in part of a crash retrieval operation. It was, at that point, a single witness case and the witness himself said that he tended to embellish his stories when he had a little bit to drink.
But then came Judith Woolcott who corroborated the tale with one of her own, saying that her husband had a small role in the retrieval. He had been in Vietnam when he wrote to her about this, but he was killed shortly after he had mailed the letter.
Then, on June 1, 2010, I heard from Kathryn Baez, the daughter of Judith Woolcott and the entire tale as told by her mother blew up...
She said that her step-father, William Woolcott was not only still alive but he had not served in Vietnam. He made it clear that he was a Vietnam era veteran, and his ship had served somewhere off the coast of Vietnam. The sailors were told they had not been in Vietnam. Further, Woolcott did not marry Judith until 1980 so he clearly was not the soldier killed in Vietnam after having participated in part of the Kingman retrieval.
But Judith had been married before. Kathryn told me that her father was Elmer E. Fingal who was born in 1938 and died in 2006. At the time of the Kingman crash, he would have been fifteen and clearly wouldn’t have been in the tower working and he wouldn’t have been an officer in the military at that time.
Fingal had also served in the Navy and Kathryn said she didn’t think he had been in Vietnam. It makes no difference because he clearly had not been in the tower and just as clearly he had not been killed in Vietnam.
Where does that leave the tale told by Judith Woolcott? No where. It never happened. Neither of her husbands had been a witness to anything. Kathryn told me that her mother liked to embellish stories and this was just another of them. In fact, Kathryn said, "I often felt that my mother sensationalized her life for which I didn’t agree and we would often butt heads."
So, we fall back to Stancil who killed his own credibility with his varying tales and his admission that he liked to spin stories, especially after he’d had a few.
There is now no independent corroboration for the case, no newspaper articles, no documentation and no solid witnesses. I think we must label this case for what it is. A hoax.
Posted by KRandle at 6:29 AM 8 comments: