There has been, circulating on the Internet, a story that a crashed flying saucer has been found in 300 feet of water in the Gulf of Bothnia. That is, in the ocean between Finland and Sweden. It was found using sonar, which detected a circular object some 60 feet in diameter.
Peter Lindberg, a Swedish researcher (for ancient shipwrecks and the like but not UFOs), while searching for a 100-year-old wreck that might contain some rare champagne, found the circular object. Lindberg did not suggest it was a flying saucer. That has been left to Internet enthusiasts who decided that anything circular and that size must be a crashed flying saucer.
Lindberg himself did not make that suggestion but did say that in his 18 years as a professional he had never seen anything quite like this. That did not mean that it wasn’t a natural formation, something made by humans, or be an anomaly created by the rough ocean floor and the depth at which the circular object was found. In fact, it might not be as perfectly circular as some speculate simply because the sonar being used didn’t have the ability to discriminate precisely at that depth.
At this point there is absolutely no reason to suspect that this is an alien craft of some sort. Lindberg has said that he is not interested in further in investigations. While the recovery of an alien craft could potentially be worth billions of dollars, the more likely scenario is that this circular object on the bottom of the ocean is just that... a circular object that has no value at all.
This should be viewed as a cautionary tale. Only the shape, circular, suggests that this might be of alien origin, and that is highly speculative. The most likely explanation is something mundane. Since Lindberg is the man who found it, and since he sees nothing of value there, and in fact, did not suggest it was alien, we would be wise to listen. Yes, we need to keep an open mind but not one that is so open our brains fall out. With nothing else reported, without further information, the logical conclusion is in the mundane.
I hope this case will not be added to some of the extremely long lists of crashed saucers that float about on the Internet. It doesn’t belong there unless and until there is more and better information.
Posted by KRandle at 12:54 PM 3 comments:

Corporal Pyles and the Roswell Skeptics

The Roswell Festival - A Brief Interview

While sitting at my table in the International UFO Museum and Research Center in Roswell, I heard a woman behind me say, “That was my father.” She was pointing to a picture of one of the soldiers assigned to the base in 1947. 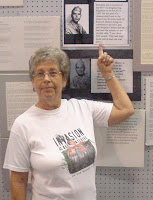 I listened to her for a moment and then stood up to learn who she was and what she had been told.
Her name was Carlene Green (seen here pointing to her father's picture) who was the daughter of Sergeant Homer G. Rowlette, a member of the 603rd Air Engineering Squadron. And as established by the Yearbook produced by Walter Haut in 1947, he was clearly in Roswell at the right time.
According to what she said, she learned of her father’s part in the crash retrieval just days before he died. He was on a Gurney and about to be wheeled into an operating room when he asked her to come closer so that he could speak to her.
He told her that he had been at the base when the “spaceship” crashed and that he had seen it. He said that the craft was rounded and that he had seen three “little people,” and suggested that one of them had survived the crash. 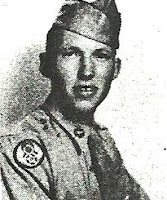 He apologized for not telling her sooner but that he had told her brother the story sometime earlier. (The Yearbook picture of Sergeant Rowlette seen here).
Finally he cautioned her to keep it all to herself, or else.
This all happened in 1988, which is, of course, ten years after Jesse Marcel, Sr. told his story and eight years after the publication of The Roswell Incident. While the story of the Roswell crash wasn’t as well known then as it is today, there were television shows that touched on it, there were documentaries about it and some magazine articles that told of it. In other words, this information didn’t appear in the vacuum that existed prior to 1980.
And yes, this is another second-hand story. It would have been nice to find it prior to Rowlette’s death in 1988 but that didn’t happen. We are left with these tales and we each must decide how important they are to the overall case. It does provide some interesting details, some of which have been suggested by others, but in the end, it is still second hand.
At any rate, Carlene Green was a nice woman who took a few minutes to share with me the information her father had given her so long ago.
Posted by KRandle at 2:01 PM 3 comments:

The Crash of Philip J. Imbrogno