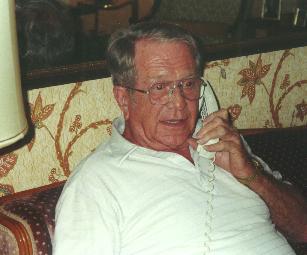 mbardier. He served in the Pacific during the war and later, in 1946, participated in Operation Crossroads, the atomic tests at Bikini. He had been assigned to the 509th Bomb Group on temporary duty for the atomic tests, but that duty was expanded into a permanent assignment. In July 1947, he was a first lieutenant and worked as the Public Information Officer for the bomb group. He left the service the next year and remained in Roswell for the rest of his life.
Haut was one of the main reasons that the Roswell case achieved international attention. He was well spoken, sometimes funny and always articulate. He provided information to all who asked for it, was courteous to the hundreds of people who showed up at his front door over the last two and a half decades, and who enjoyed his role as "Mr. UFO." With his passing, one of the pillars of the Roswell UFO crash has been lost.
Posted by KRandle at 3:24 PM