A number of years ago, more than I like to think about, I used to visit newspaper morgues and ask about UFO st 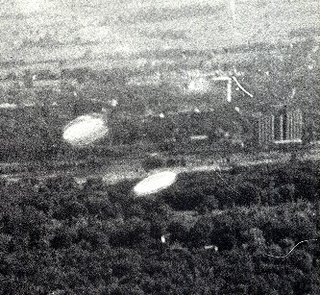 ories. Sometimes I got lucky and found information on cases that hadn’t been reported outside the local area. In Cedar Rapids I was given a photograph of two objects (seen at the left) as they flew over town. I deduced the date as late August or early September based on evidence in the picture and was told that it had been taken by Fay Clark, one time the mayor of little Hiawatha, Iowa.
Later I learned that the picture had been taken on September 3, 1955, and was pleased that I had figured the time of year properly. I learned that Sam Stochl had been commissioned by the mayor, Clark, to take aerial photographs of Hiawatha but hadn’t seen the objects in the picture. Clark said that "knowing the airplane was flying at 1,200 feet... we can triangulate the objects as approximately 33 feet in diameter... at an altitude of 800 feet."
All well and good, but the picture always struck me as looking as if the objects had been drawn on the photographic paper and then the picture printed. You might remember how you could put designs on Easter eggs using wax to protect the shell from the dye. I always thought the objects had that sort of a quality too them. I especially thought this after learning that no one had seen the objects in broad daylight.
Now I learn a little more about Fay Clark. He is credited with founding Hiawatha. He was a rock hound, a flying saucer enthusiast and had an interest in photography. He wrote about book in 1958, Beyond the Light, about astral projection and parapsychology.
Given this information, especially about his interests in UFOs and photography, given the look of the photograph, and given that the actual photographer, Sam Stochl didn’t see the objects, I think we can conclude that Clark created the photograph. It was undoubtedly meant as a local oddity and nothing more, though it has appeared in one book published for a national audience some years later.
This is just another in a long list of UFO photographs that doesn’t deserve much more than a casual glance. And even if we called the photograph authentic (meaning of real UFOs) there isn’t much more we can do. There are no eyewitnesses and the evidence offered is of little value without additional information. It is an oddity, it is interesting, and it does nothing to increase our knowledge.
Posted by KRandle at 2:11 PM

I concur. However, here's the $1 million question (well, I'm not really going to give you a $1 million, but...) - are there any UFO photos that you do consider authentic, i.e. of a structured craft (which may or may not be alien, but which remains unidentified), as opposed to lights in the sky etc.?

Million dollar question indeed, Paul. If it's nuts-n-bolts you want, McMinnville and Trindade would have to be at the top of the list. After surviving the recent firestorm on UFOUpdates, you still have to put Rex Heflins pics up there too. Beyond that, what's left?