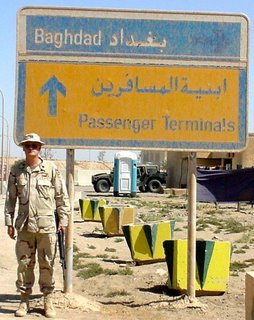 oming difficult to separate the truth from the fiction. When we find someone whose claims do not match the documented background, we are told that the person’s records have been changed or erased to invalidate their claims. I always find this silly because there is no way the government, no matter how they tried, could get all the records altered and the files lost on the scale claimed.
For example, there are some out there in Cyberspace who have been suggesting that my claims of a recent tour in Iraq and claim of being a member of the U.S. Army now (meaning the National Guard) are some of the same sort of embellishment. They have no proof that I have made up these facts, but they don’t like some of the conclusions I have drawn about their favorite cases or witnesses. They speculate without foundation.
While I refuse to place, on the Internet, documents that would prove my point, I have no real trouble putting up pictures (as seen on the left). Sure, I know that pictures can be easily faked in today’s world, and I’m sure that some of these critics will delight in pointing out how these pictures have 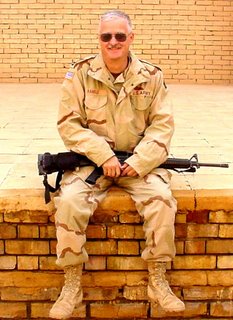 been faked, but the truth is, I spent about 11 months in the Iraqi Theater, I have a couple of a thousand pictures I took and there are several hundred soldiers who saw me there. Dozens saw me on a daily basis.
In fact, for those interested, I suggest looking at the February 2005 issue of Soldier of Fortune magazine for some confirmation of my tour in Iraq.
The point here is that the critics can say what they want and rather than say I don’t care what they say and ignore the criticism, I offer some evidence to the contrary. There are others whose stories simply don’t check out. Just recently I came across the story of Colonel Steve Wilson who had an interesting story about his insider status. He seemed to know who made up the Majestic-12 committee in the 1990s, he was the commander of Project Pounce, which had the mission of recovering UFO crash debris, and he had a long, impressive military career. Wilson died of cancer in 1997. Some have suggested his death was mysterious and have hinted that we know that cancer is one of the ways "THEY" get rid of those who are causing them trouble.
According to Dr. Richard Boylan as reprinted on a couple of different web sites, "Steve Wilson was born in the 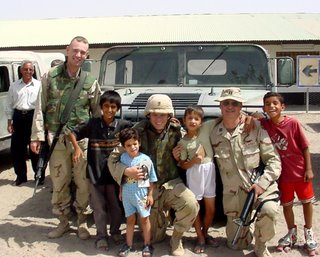 As for you being in Iraq, I hereby confirm that I have seen an awful lot of Kevin's pictures, in all sorts of nifty places in Iraq, including many that you would have had to have been there to have a picture of.

Then again, as I'm a mouthpiece for the mainstream, I'm not sure how much help my confirmation will be to you in certain quarters! :-)

My grand father joined the nave at the age of 15 and was a frog man in the pacific clearing beaches before invasions at the ripe age of 16. I told me many times of fellow sailors that were ages 12-14 year old farm boys. Later in life I even saw a movie about a 12 year old arrested in the Navy in WWII for being under age. I believe Rich Schroder played the part. I would not dismiss the possibility of a 13 year old in the Army as well. From 1944-1946 we were loosing soldiers in the Pacific as they stormed beaches at an alarming rate. We would loose as many brave soldiers as we have lost the last 4 years in Iraq/Afganistan in just a few minutes in the WWII Pacific theater. Just something to think about

Good work, Kevin. We all know, even the Air Force agreed, that outright hoaxes are relatively rare (not the same, of course, as wholly nonexistent) in UFO reporting. In two areas, however, they're rampant. One is photographs; the other is in claims of cover-up insiderdom.

In legal matters one is innocent till proven guilty, and that is an excellent principle. But in ufology, when someone claims to have participated in the conspiracy cover-up as an intelligence operative or military officer, the opposite is surely true. Or, anyway if the person is not judged immediately guilty of fibbing through his teeth, at least he ought to be subject to severe skepticism unless or until hard-core validating evidence indicates otherwise.

By the way, I'm surprised -- shocked, even -- to read that some dimwits are questioning your service in Iraq.

I think that your analysis is fundamentally flawed for various reasons, as well as uterly incoherent and outright stupid in other cases. I dont doubt that you are serving in Iraq, because only a moron or someone with a subconcious death wish would want tohave served in Iraq right. Thats another topic.
In one line you mean to say anniversary, and you had a brain fart and used the word university. Your a silly ingnorent, niavve little pawn on the chessboard of life, doing the bidding of utterly heartless lying scum of the earth. You are essentaillya murderer for hire, and your nt even making that much. I would support you if this was a neccesary war, but this is just a occupation/civil war.... anyways...
UFos and ETS are real, and if you dont beleive me, mister military man, sift through the thousands of documents openly available to the public regarding Freedom of information act material, on the NSA(national security Agency)website, www.NSA.gov
and search the online documents, you will find evidence of a coverup. If you do real honest in depth research, you will find the preponderence of evidence is overwhelmingly strongly in favor of the existence of "visitors", from a place that is kept secret from the general public, be they extraterrestrial, interdimensional,time travellers, or something as yet indetermined.....
They do exist... and even if steve wilsons story is not true, have fun invalidating the testimony of hundreds of other highly qualified government and civilian witnesses, many in the military with ranks much higher than you, who will swear up and down this stuff is real. Try the www.disclosureproject.com website for a start. Try discrediting Colenel Phillip J. Corso. These are men who we owe the real honor, who are real patriots, only to have their names smeared by some goon who served in Iraq who thinks he's Dick tracy mixed with sherlock holmes. Try watching the history channel, and the UFO files show they have. Debunk the thousands of cases and have fun, because in the end, you either scared, or stpid, or both, to deny this reality. P.s. GO Pirates, @UMASSD.edu

liked your little research on Colonel Steve Wilson. Sounded bit far fetched listening to all the interviews and that done on him.
As for you pictures I reckon u served in Iraq as well. Lol.
Just like to briefly go on about all this UFO lark. I've been really intrigued and been listening to countless interviews and info regarding all these whistleblowers and ex scientists and alsorts confirming all this wonderful info on ufos and aliens... But weres the evidence? Now if I wanted people to believ me on something then I would make sure I get some evidence to support this? U agree? Everytime I've listened to these people, bob lazar, dr Greer, dan burisch and can't help but laugh because when there broached on when they give info on something, the interviewer asks to go into detail and the first thing they say is ' and another thing' and move on to something else? Why? Cos they don't know anything else. It's these one liners on something and then there talking about something else. Why not go into detail on that one subject? To me that tells me these are just rumours that they've heard but they back it up with 'I got this from my source' and 'i've seen evidence of this' where? Show me? I want to see hard facts and evidence. But u never get it.
Don't get me wrong I do believe in stuff cos why would all the astronauts come out and say stuff? They were up there? I mean if u look hard enough, u see like videos from south American tv showing weird things in the sky in broad daylight and some of them NASA videos are good, but unless someone gets a proper video of some craft in the sky or has the bottle to take a proper video of an alien then the general public is never gonna take a blind bit of notice to UFO followers. If anyone has any take on this or can tell of real Info which I'm doubtful anyone could provide then please contact me benfitz82@googlemail.com

Just like to add to my first post. With regards to these whistleblowers and all the other names they give themselves, why do they only interested in making money?on most of their sites they offer the same info u've already heard on cd and DVDs and again hit u with 'due to release never before seen or heard info' and no new info gets provided, just regurgitated info. It's just a shame no one real out there has came out with real info with hard evidence, just these cowboys that come out the woodworks when they see a few quid to be made, and unfortunately alot of these UFO followers fall for it. This just happens because they want to believe in Something so much, they seem to forget bout real hard evidence.

Since you can buy all the medals (with the exception of the Medal of Honor) at surplus stores and online, that he had the medals means nothing. If you have seen the actual citations, that would be something different...

And, since MJ-12 is a hoax, there are no papers that he shouldn't have had. Sorry, but his involvement in UFOs is not what he claimed it to be.