High school student Mark Leonard was attempting to take time exposures of the moon on the evening of November 22, 1975 when his attention was drawn to a bright light overhead. He thought it would 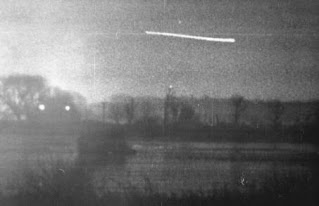 be a good reference point for a shot across the pond and centered the light in the view finder and snapped the shutter (seen at the left). When he looked through the view finder again, he saw that the object had moved. He centered it again and took the second picture. After that exposure, he saw that the object had moved so far, he had to move the camera so that he could take the third, and last, of the photographs (seen below and at the left). The object finally moved behind some trees and was no longer in view.
Leonard said that the light seemed to flicker as it moved, not unlike the way a railroad engines front light sweeps from side to side. He believed that it was accelerating to the north as it disappeared.
Leonard was quick to show investigators all the negatives he had taken that night. There was no evidence that he 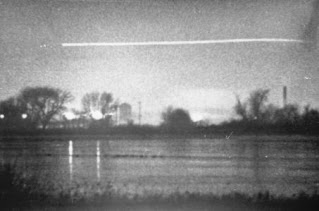 had been experimenting with trick photography. The film seemed to bear out the tale he told.
Plotting the flight path on a map, revealed that it seemed to be flying too slowly to be meteors or aircraft. At ten miles distance, the object would have been moving at only sixty miles an hour and it is unlikely that the object was that far away. Operations at the Cedar Rapids (Iowa) Airport had been suspended for the night by the time the object was photographed. That certainly ruled out commercial aircraft.
Although the explanation has been found, it is one that is somewhat speculative. The speeds were plotted assuming that the object was flying perpendicular to the camera. If, however, it was flying at an angle away from the camera, the speed computations would be flawed. Leonard said that he heard no sound of an engine, but with the wind blowing away from him, he might not have heard it.
The sighting is most likely of a small, private aircraft (seen at the left in an enhanced print), heading

either to the Cedar Rapids airport, or to one of the other small fields in the area. The weather was fair, though cold. Given that, it could be a private aircraft operating under visual flight rules with no flight plan filed and no way to discover, when the investigation began, if such a flight had taken place.
Posted by KRandle at 5:25 PM