In the last few hours I have received a number of emails asking if I thought that Frank Kaufmann might have been an agent of disinformation. That implies that Kaufmann had some real role in the cover-up, though he might not have been the insider that he claimed to be. The short answer is, "No."
Kaufmann was an opportunist whose name was provided by Walter Haut. I wish that I had the opportunity to question Walter about this, but like so much else in the case, when I learned the truth, it was too late to ask the questions.
Following is some of the documentation that Frank offered as his proof. And there is short commentary about why one document or another is faked. 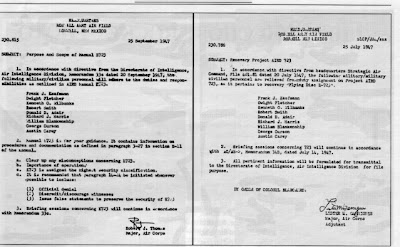 Frank offered a couple of letters showing intelligence assignments, one signed by Robert J. Thomas, who Kaufmann claimed variously was a warrant officer, a major and a brigadier general, and while it is not impossible for one man to hold those ranks at various points in a military career, according to Kaufmann, he held them all at once.

The second letter is signed by Lester M. Garrigues and is dated 25 July 1947. To Kaufmann’s surprise, Garrigues was still alive and provided the Center for UFO Studies with this analysis:

As I had mentioned to your before, I was transferred from Roswell with my last duty day being June 2, 1947, and was then on leave and enroute to China where I was assigned as Personnel Advisor to the Chinese Air Force beginning July 11, 1947.

In other words, Garrigues wasn’t even in the United States on 25 July. To prove his point, he provided documents showing that he had left Roswell and wasn’t writing any letters about the crash or the people.

Next is the Easley letter. I suspect the signature is authentic, meaning, simply that it was lifted from one letter and applied to the next. A little white-out and a Xerox machine make it look real. The problem, as pointed out by other researchers is that some of the office symbols used here, while authentic, were of offices that did not exist in 1947, proving this document a fake. 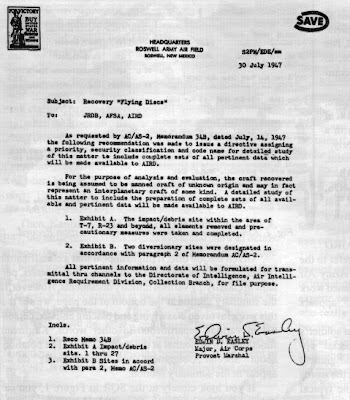 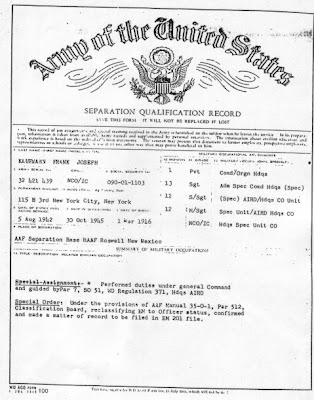 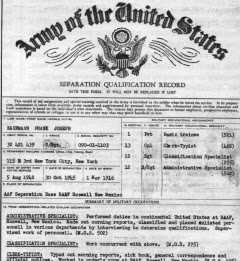 What we have is a clever man with two typewriters from 1947, a supply of paper from 1947, documents with real signature on them and a little knowledge of how these things work. But there is nothing in the Frank Kaufmann stories that is helpful to us, he was not an agent of disinformation and the faster we forget about him, the better we all are going to be.
The Frank Kaufmann episode does raise one important question. If we are to believe the latest Walter Haut affidavit, and if Walter was the insider that he claimed to be in that affidavit, then how come he pointed us to Kaufmann, and why didn’t he know that Kaufmann was making it all up?
Posted by KRandle at 8:36 AM

When in the time-line , when you would have received the most documentation, or maybe at least the most provocative documentation, compared to when Walter Haut gave you the thumbs up about kaufmann? What I mean is, could he have heard that Walter Haut said his name was "gold", causing him to feel pressured to produce?

I think that Haut and Kaufmann were sort of working together on this, in the beginning. Kaufmann always said that he had documentation to prove what he said, so, I don't think Haut's vouching for him had anything to do with the appearance of the documents.

The pressure, if there was any, came from Kent Jeffrey and Karl Pflock. It was after Jeffrey turned on Roswell and about the time Pflock's book was published that we began to get the best documentation.

Your prompt replies are appreciated. I'll back off for awhile. I don't want others to stop posting questions because of me.

I'm as eager to forget Kaufmann as anyone. Still, do you think he based any of his account on actual events he might have heard about?

By the time we got to Kaufmann in 1990, there had been some things published about Roswell and there had been the Unsolved Mysteries show. Clearly Kaufmann had talked to Walter Haut because it was Walter who gave me the name and told me I'd want to talk to Kaufmann. So, yes, there were plenty of opportunities for Kaufmann to have seen, heard, or talked to those who had been involved in some fashion.

But what was the incentive to fake those documents and lie like that? What did Kaufmann hope to gain? Was he a professional con man at any prior stage in his career? I think someone in authority must have put him up to it, supplied him with the necesary materials, told him what to say etc. Haut and Kaufmann were both disinformation agents. Why would Haut recommmend Kaufmann unless he wanted you to be decieved by him? And who else but the government had an incentive to deceive, to help hide real secrets? There's no basis, AFAIK, for the supposed expert status of Kaufmann, and I think Haut would have known that; Kaufmann was nobody back in 1947. But he still misled you.

Btw, Friedman may have realized that Kaufmann was no good earlier but what do you make of Friedman's claim in TOP SECRET/MAJIK of "strong evidence" for a crash on the Plains? What evidence, other than the discredited Anderson and Barnet?