Milton Sprouse, 86, (seen below) spent ten years as a soldier stationed at the Roswell Army Air Field, and yes, he was there in July 1947 when the UFO crashed.

Sprouse’s name surfaced recently when he was interviewed by Gary Warth of the North County Times.

I talked to Sprouse the other day so that I could clarify some of the questions I had about what he had seen and who he had talked to.

I asked him if he had seen anything personally and he said, "I did not. I was a crew chief on a B-29 and I had to stand by my airplane in case it needed to fly." He said that he had been in Tampa, Florida for three days and had returned on the day that it happen. That was when his friends told him about the crash.

But he said that a number of his friends were taken out to what I think of as the debris field and participated in the clean up there. Sprouse suggested that about 500 soldiers were on that field, moving shoulder to shoulder and picking up everything they could find (Recreation for the Showtime movie Roswell, seen below). 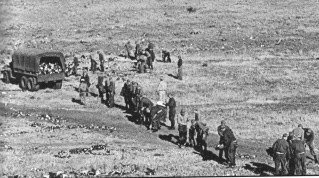 He said that these men hadn’t seen the bodies because they had already been removed, and they didn’t see a craft. He did say, "There were big pieces... up to twelve inches or bigger all over that ranch. But they didn’t recognize what any of it was."
He said that they laughed about the weather balloon explanation. He said, "I’ve seen weather balloons. They’ve been launched all around my airplane there at Roswell many times." Which suggests that nearly everyone in Roswell would be familiar with what a weather balloon looked like and it seems unlikely anyone would be fooled by such debris.
One of this friends, a barracks buddy, had been a medic and had, one night, been called to the hospital. Sprouse said, "I lived in the barracks. I was single at the time... One of the barracks buddies was a sergeant and he worked in the Medics. He lived in the barracks. And he got a call to report to the hospital and he went up and when he come back he said, ‘You wouldn’t believe what I been through and what I’ve seen.’ He didn’t have too much to say about anything because they told him not to talk about everything and we didn’t get much from him but later on he did say he was one of the few enlisted there and there were two doctors and two nurses in there. And of course he left right after that incident and never said good-by to us or nothing."

Sprouse also told me that had recalled all the newspapers, meaning the July 8 edition of the Roswell Daily Record in which it was reported that a flying saucer had been found, were picked up by the officers (Front page seen below). He said, "They gave that story out first from the base. Walter [Haut] gave it out. Blanchard and Ramey must have okayed it because they gave it out and they printed the paper and then that’s when they recalled it, recalled all the papers and denied it and brought in that weather balloon." 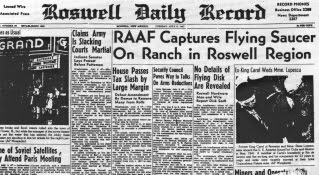 There are a few problems with Sprouse’s story. First is that he can’t remember any of the names of those who went out onto the debris field for the retrieval. He said that the names we found in the Yearbook for his crew were those who had joined him later, after these events. He said that his aircraft commander was Colonel William H. Harrison, and Harrison was certainly an aircraft commander at Roswell in the right time frame. But, when Sprouse called Harrison, he was told that he, Harrison, remembered very little. In fact, according to Sprouse, Harrison said, "‘I don’t remember, Milt, who you are.’ And he and I were friends because I was his crew chief for a heck of a long time. I flew all over the world with him... but I didn’t get to talk to his wife or nothing because he hung up on me after a while and I’ve never called him again because it was a waste of time because he didn’t know who I was and we had nothing to talk about in common."

Second, while I have heard tales of newspapers printing flying saucer stories and that someone made an effort to recall all those newspapers, this is not something that had been associated with the Roswell case until now. It wasn’t effective because we have all seen the newspaper. I suppose they might have wanted to get it off the base to inhibit the soldiers talking about it and didn’t care what was left in the civilian community, but that makes no real sense.

Finally, we have been unable to discover who the medic was. He’s just another unnamed source who might have been a staff sergeant at the time, and who might have been promoted to what was known as a technical sergeant (now known as either a platoon sergeant or a sergeant first class) but that doesn’t help us much. There are eleven men in those two grades in the Yearbook (one of the pages for the Medics seen below). Yes, it will take some time to check them out with no guarantee that anyone of them will be the right guy. Haut said that fifteen to twenty percent of the soldiers at Roswell were not included in the Yearbook for a variety of reasons. 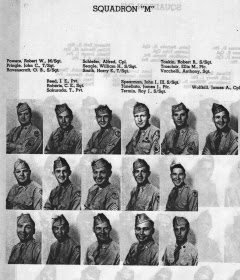 So, we are left with a second-hand story that might provide us with some clues about the Roswell case. We might be able to learn the name of Sprouse’s medic friend, then we might be able to find him, and he might still be alive. Of course the case is important enough that we should make these efforts.

As I learn more about this, I will publish the results. Until then we have an interesting tale that might grow into something important. Without additional corroboration we will have to leave it at that. It might be of importance. And then again, maybe not.

I have my doubts about the Sprouse story, too. Can't remember where I read it now, but I saw a version of his account in which he claimed someone told him the Roswell bodies were green. Most accounts relate the bodies' color as yellow/brown.

Yeah, that comes from Carey's Witnesss to Roswell. Sprouse was a disinformation agent just like Kaufmann and many others. I think I understand what he was trying to accomplish, just like the others...