There has been a great deal revealed about the Roswell case in the last few months. New witnesses, well, second-hand witnesses have been quoted extensively. Men and women who say that family members told them about the UFO crash, but who had not seen anything themselves have been located. With a second-hand witness, it is always possible that he or she miss heard or misunderstood what was being said.
But sometimes we get a hint of a first-hand witness and have those statements

corroborated by a second-hand witness. Sure, this is confusing, but let’s just take a moment and examine one such case.
We know that 1st Lt. Harry N. Cordes served with the 509th Bomb Group in Roswell in 1947, specifically with the 393rd Bomb Squadron. And yes, his picture is in the Yearbook that Walter Haut prepared.. According to his official Air Force biography, in 1946 General Cordes [as a lieutenant] participated in the first atomic bomb tests at Bikini Atoll. From 1946 to 1949 he was assigned to the 509th Bombardment Group, Roswell Air Force Base, N.M., as a radar observer on a B-29 crew. His crew won the first annual SAC bombing competition in 1948. He entered pilot training in August 1949 and when he graduated in 1950 returned to the 509th Bomb Group as a pilot and was later aircraft commander of a B-50. He served in a variety of assignments after he left Roswell, and eventually, as a brigadier general (seen below) assumed duties as deputy chief of staff, intelligence, at the Headquarters of the Strategic Air Command (SAC), Offutt Air Force Base in April 1970. He retired on July 1, 1973 and he died on May 10, 2004.
Cordes has been reported as saying that when he was assigned to the CIA one of the first things he had done was look for the Roswell files but they were missing. It is an interesting statement, but by itself, means little.
Tony Brangalia decided to follow up on this. He located Cordes widow who told him that she was surprised that Cordes would say anything like that to anyone outside the family. But then she went on and confirmed the fact saying that he told her that he had unsuccessfully tried to find the Roswell file back in the 1950s.
According to 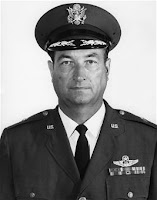 the notes that Brangalia shared with me, as a lieutenant, Cordes admired Jesse Marcel, Sr. (who was an intelligence officer and Cordes would find himself assigned to intelligence later in his career) and said that there was no reason for him to lie about anything. She said that Glenn Dennis’ nurse had been committed to a home before she died (Hey, I’m just reporting what was said, but here is a little corroboration for the Dennis story). She said that Blanchard was "a believer and anyone in the military who wanted to stay in didn’t talk about it."
Because she had grown up on a farm near Roswell and had worked in the First National Bank there, she knew many of the players in this story, knew some things about the case outside the military. She said that she had lived two doors down from the Wilcox family and said that they "were threatened and were afraid for their own reasons."
Working in the bank she heard things from the ranchers and wrote, "At the bank I heard the ranchers discussing Mack Brazel and they thought his new red pickup was his payoff."
But her story wasn’t just about what she had heard in the bank. She wrote, "My story begins the night of July 3rd with my family in Ruidoso where we always celebrated the 4th and I had to close the bank and was tasked with icing the soda and beer and driving to meet them. As I made the usual rounds for ice I was told that the Air Base had bought all the ice so I went to the train station looking for dry ice but was told the AFB had wiped them out..."
She added, "Then when our family returned that week to go back to our ranch to attend to our stock we were barred from the Pine Lodge hiway by camaflogued [sic] airmen with machine guns that some fear entered the picture. Many stories at the bank from early rising ranchers about long trucks covered in canvas going to the base before dawn!!"
She said, "My husband flew 25 different planes including the U-2 and Air-borne [sic] Looking Glass [which was the airborne command post during the Cold War] and said there was nothing hidden at Area-51 except planes [sorry Bob Lazar fans]. He also wondered his whole life why there was a cover-up and yes, he did tell me that he perused the files as a CIA agent but found everything empty."
I will note here that there is nothing in Cordes official biography that suggests he was detailed to the CIA, but, by the same token, there are gaps in it. However, after his completion of Command and Staff School he was assigned as an intelligence staff officer which could mean he worked with the CIA and would have had some access to their records.
There is one other point to be made here. Kent Jeffrey, as he was conducting his Roswell research, contacted Cordes. Apparently Cordes said nothing to him about his involvement or knowledge but referred Kent to George Weinbrenner. Jeffrey wrote about this saying, "After my conversations with Klinikowsky and Vatunac, Harry Cordes, a former 509th pilot and a retired brigadier general suggested I call a former acquaintance of his, George Weinbrenner, who had also been at the FTD [Foreign Technology Division, where Klinikowsky and Vatunac had also served]... Weinbrenner told me pretty much what I had already learned from Klinikowsky and Vatunac, but it was interesting to talk to him, nonetheless. With respect to the crashed UFO subject, he also found it humorous and stated that if something like that had happened, I would have know about it..."
But now we have evidence, from both Cordes and his widow that Cordes knew about it. So the question is, why didn’t Weinbrenner know? Could it be that Weinbrenner was keeping the secret? And why would Cordes tell Jeffrey to talk to Weinbrenner?
In the end, we have an intriguing story that begins with a quote from a former Air Force brigadier general and then we have additional information from his wife. First-hand quotes from the general, first-hand quotes and observations from the wife, and then her memories of things her husband had shared with her. Maybe not the smoking gun, but certainly interesting testimony to add to the stack.
Posted by KRandle at 9:27 AM

The problem with any evidence presented in any UFO case is that all too often the wittness isn't available for interview.
Video, still photos, statements, all can be challenged and are.
Sadly,until we have an event like in a movie with some huge ship over a major city, the world will think we're all nuts.

No, the first hand witness problem is only for the oldest cases like Roswell. And lack of witness testimony isn't the main problem; there is a plethora of it. What is needed is more physical evidence but of course the ETs won't provide it yet, not any more than the government. But I think UFOlogy is gradually gaining respectability even if we have a ways to go.