It shows two alien beings with no hair, no nose, a slit-like mouth and large eyes. Through a door, one of the strange creatures is looking at a woman on an examination table. Her eyes are closed and she is covered by a sheet (a convention of the time), but it is clear that she is naked under the cloth. In the foreground another creature is restraining a man trying to break through to the woman.
This cover predicts many elements of the abduction phenomenon of forty years later. Although, the alien beings have pupils in large whites of the eyes, the similarities to the modern abductions is striking. To suggest that abductees of today could not have seen the cover of a science fiction magazine published decades years earlier is to miss the point. It demonstrates that the idea of alien abduction is not something that developed in a vacuum recently, as aliens began abducting humans, but in fact, had been announced in public long before anyone had heard of flying saucers and alien abduction.
The idea that the aliens are from a dying planet have been played out in everything from Not of this Earth first released in 1956 to many of the most recent science fiction movies, including a 1994 remake of Not of This Earth. Interestingly, the alien is collecting blood in an aluminum briefcase and he always wears dark glasses to hide his eyes. Although not collecting genetic material in the way sometimes suggested by abductees, he is required to send humans to his home world as they attempt to end the plague destroying them. The obvious purpose is to gather human genetic material.
But that very problem is discussed in The Night Caller made in 1965. In that movie the alien is sent to Earth to provide women for "genetic experiments" on his home world. The women are, of course, abducted by that alien.
Films, such as This Island Earth contain alien scientists eventually abducting Earth scientists to help them defeat their enemies on their home world. The 27th Day, features potential alien invaders who provide several people with the power to destroy all human life on Earth so that the aliens can inherit it.
And each of these films suggest human abduction somewhere in the storyline. The 27th Day, begins with five people abducted onto an alien ship where time slows almost to a standstill. The abductees are returned quickly, after being given their mission, and the weapons to wipe out the human race.
Peter Graves, a scientist working on atomic energy, is abducted from his jet as it crashes in Killers from Space. He returns to the base, confused, with a period of missing time and a huge scar on his chest. The one thing that stands out in the film is the huge eyes of the aliens. Although not the jet black orbs of the modern abduction tales, these eyes haunt Graves as he tries to remember exactly what has happened to him. And Graves remembers nothing of the encounter until he undergoes a chemical regression aided by sodium amytal.
To take the Killers from Space (aliens from that movie seen here) theme even a step further, in 1975 I attended a UFO conference in Fort Smith, Arkansas. A man there claimed to have been abducted while waiting in his car at a railroad crossin 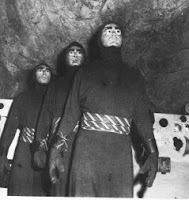 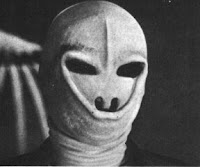 y time that he ever watched it. The coincidence between the airing of The Bellero Shield and Barney's description some twelve days later is interesting. (See also my discussion of the Twilight Zone episode about an alien abduction called "Hocus Pocus and Frisby" that follows this. Alien from that broadcast shown here.)
The situation of April 1961 is slightly different than we have been lead to believe. The Hill abduction didn't spring into existence in a cultural vacuum, but in a society where information was shared nationally on television and by the movies, not to mention magazines and books. Betty's interest in UFOs predated her experience because of her sister's UFO sighting, and Barney's fear of capture while driving on a lonely stretch of highway in New Hampshire, created the scenario. As the days passed, Betty Hill dreamed of the incident, writing about them in her diary. When interviewed by interested UFO researchers, she always told about her dreams, with Barney sitting in the room with her. The rest of it came together almost naturally.
It is important to note that the Hills' psychiatrist, Dr. Benjamin Simon, never believed the story told under hypnosis. He didn't accept the abduction as real. He believed it to be a confabulation, a fact often forgotten by UFO researchers.
What we have then, is a well ingrained theory, that is, that aliens are abducting humans, fueled by speculation from science fiction movies and the popular press. All the ideas have been discussed, in the movies, on the radio, on television and in books. All elements of the abduction phenomenon have been well publicized long before the first of the abductions was reported. Contrary to what the UFO researchers might want to believe, we can find all the elements of abduction in pop culture. We may have to search several sources, but there is no denying that the elements were all present before Betty Hill made her astonishing report.
If alien abductions are real, and even if we find precedents in pop culture and in folklore traditions, the abduction experience itself should be unique. We should find nothing similar to it in our society. It turns out that such is not the case. Alien abduction is not unique. There is another phenomenon that has grown out of pop culture, whose traditions and traits mimic UFO abduction almost step for step. It is a phenomenon reported, essentially by the same kinds of people, investigated by the same kinds of people, and it provides us with clues about the reality of claims of alien abduction.
Posted by KRandle at 9:27 AM

What your conjecture presents is a chicken/egg scenario: which came first.

It's possible (and possible is the operative word) that the writers for movies, SciFi magazines, and TV shows did not generate their abduction tales ex nihilo, from nothing.

The tales had to have precursors, and where did those precursors come from?

Did abductions take place and writers got their ideas from them somehow, or did writers come up with an original concept (alien abduction) that spread like wildfire in the SciFi community.

I'm no big fan of the abduction phenomenon, but something happened to the Hills, and others, that needs more than the cultural stretch you propose.....although your views resonate well with us UFO agnostics.

This article caused me to get out the book again and reread some of it.

It's a slightly different sub-topic, but I must admit that the part about people without proper borders is very to the point. It may not fit every scenario, but I definitely agree that certain people could be coached into having more and more dreams, hence made to believe they are continually being re-abducted, as a direct result of continuing "therapy".

Of course Simon denied the Hills were really taken by aliens. Had he accepted that story, it would've been the end of him professionally. Colleagues would've considered him crazy. Even many years later, Mack incurred ridicule, despite the fact that the abduction phenomenon was no longer new and was beginning to gain some acceptance.

Please remember that all I'm saying here is that the cultural elements of alien abduction existed prior to the first reported abductions. I'm not saying that they caused it, only that they might have influenced it.

Yes, the Hills suffered some sort of trauma, but it wasn't necessarily alien abduction. The roots of their trauma might have been elsewhere. Please not the qualificaitons. I'm not saying that these other, terrestrial explanations are correct, only that we need to look at it to understand the whole picture.

Finally, Simon said what he believed to be the truth and Mack got into trouble, not for studying alien abduction but for violating research protocols. And also remember that this was all ended in his favor. He suffered no real trouble for his beliefs... unlike some of us who are attacked for suggesting that we look everywhere for our explanations and not just at the extraterrestrial.

Kevin,
I went to a MUFON meeting last night. A talk was given on abductions. There was no mention of you book "The Abduction Enigma" during the talk. Afterward, I asked the about your book to the presenter who responded that you "cherry picked" abduction cases that fit your theory, and rejected cases that were more enigmatic.