For those interested, I have been checking out some of the latest UFO crashes and find that few of them actually suggest UFOs. We’ve looked at the Needles, California crash that was investigated by George Knapp in May 2008 which was probably of terrestrial origin. Now it’s time to look at some of the others which are of extraterrestrial origin, though not of alien origin. It seems that we’ve reached the point where everything in the sky is labeled a UFO, if it comes close to the ground and especially if it hits.
A couple of interesting reports come from Colorado. On January 12, 1998, according to an article written by Jim Hughes and published in the Denver Post, a bright light flashed over the front range, lighting up the ground and then disappeared with a deafening explosion. Sounds like we might have a UFO crash.
The director of the University of Colorado’s Fiske Observatory in Boulder, Katy Garmany, said that it could h

ave been a meteor, except meteors typically burn up some 20 to 40 miles high and don’t emit sound.
And there are those that do hit the ground creating craters that are sprinkled around the United States including the huge Barringer Crater in Arizona and a cluster of smaller craters near Odessa, Texas (Seen here and just below).
And bolides, that is, very bright meteors, are often associated with a sound. A roaring like a freight train, or a series of detonations like sonic booms.
The Denver Post reported that the last big fireball that flashed over Colorado, in 1995, was recorded on video cameras. It seems that this latest one (well, later than the 1995 one) was recorded by that same camera.
There were those who were interviewed, such as a spokesman at Peterson Air Force Base who said that it was nothing from there that would have caused the sighting. Apropos of nothing at all, how many times have we heard this from an Air Force spokesman, or spokeswoman, only to have it retract

ed a day or so later? No, I’m not suggesting that this was anything other than a meteor, merely pointing out that the Air Force Public Affairs Officers sometimes shoot from the lip (yes, pun intended).
Commander David Knox of the U.S. Space Command at Cheyenne Mountain, told the Denver Post reporter that he didn’t want to say it was a meteor because he didn’t know but that his agency tracks some 8,000 objects in orbit and that it wasn’t one of those.
In a weird coincidence, and again according to the Denver Post, but this time written by Stephanie Sylvester on January 28, 1998, several people saw a "fiery object trailed by a plume of smoke crash to the ground..." near Breckenridge, Colorado
Witnesses in Breckenridge saw it as if fell, disappearing behind some trees near the ski resort, which is not to say that it fell close to the resort or that it landed behind the trees. A spokesman for the Los Alamos National Laboratory said that he thought it was a daytime fireball... which, I suppose would be a bolide, for those who like technical terms.
Then, hours later, more people reported seeing another bright object flashing overhead and falling toward the ground south of Breckenridge. One of the witnesses, Jon Sperber, was reported 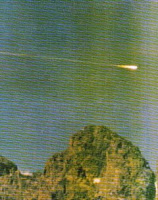 by Sylvester to have said, "It looked like an egg and was so bright that we could see smoke behind it."
In a strange twist to this story, others reported seeing a fireball about two hours before Sperber.
Doug Revelle at the Los Alamos National Laboratory was reported by the Denver Post to have said, "The key to this thing is the smoke. That means it was very big."
Bill Steigerwald told the Denver Post reporters that they had received a high number of reported meteor sightings that year.
The thing here is that all these events have been put on some lists of UFO crashes and there really doesn’t seem to be much question about what they really were. Most of the witnesses said that they thought, originally, that an airplane was crashing, but then identified the meteor for what it was... a natural phenomenon.
Meteors of this size (bolide over the Teton Mountains), especially those visible during the day are rare, but there are many examples of them. There have been pictures taken, and, in some cases, the remains have been found. For me, these things are interesting, but for others, they are just one more story that clutters up the newspapers.
Posted by KRandle at 2:31 PM

This brings to mind the recent mass sighting of a brightly lit, colorful object that allegedly fell from the sky and crashed in Saudi Arabia just recently. It was reportedly observed by millions of people.

The object was originally claimed to be caugh on tape: http://www.youtube.com/watch?v=nevFG1rSOPw

It turned out to be of a meteor taped in Australia in 2006. There are still a great number of people that claim the event in Saudi Arabia did happen, and that the video swap was just an accident. I honestly haven't looked into it enough to verify, though.

I've tried to hold off commenting, in respect for the other more noteworthy commentators, but it seems as though they have little to say on this one.

Health, family, and work responsibilities have kept me from being more active in investigations of more current incidences/activities, so my work has tended to focus on what others might complain as being from the past.

As such, the past record has shown me that meteors, and Bolides have played an important, and significant role in the UFO story. Although these meteorological moments have been misunderstood, at times, if they are not truly accounted for, they do rightfully remain in the Unidentified category, simply because they are not identified.

Yet, in the historical record, there have been those incidents which seem to be implying that strange aero-craft, piloted by something, or someone, have using meteorological incidents as a possible cover --in order to protect them from their own possible exposure? The Chiles/Whitted case comes to mind first, and foremost. The Air Force left this sighting, in their records, as a meteor sighting, mostly because of a meteor sighting that was confirmed 400 miles away from the actual incident.

I have mentioned the October, 1947 Mexico incident, several times now, because it too was labeled as a meteor. Yet, to my (albeit limited) knowledge to date, there is no record of meteorological samples ever having been studied from this "fall", and it was proven at the time, by all the areas of importance, to have NOT been as a result of an errant rocket test.

In September, 1950, the famous "Murray Meteor" fall occurred, yet when the records are perused, it is noticed that several inconsistencies exist that imply more than one object was in play, and those others showed definite controlled actions, which seemed to dispel the meteor explanation.

Perhaps the most famous meteorite(?) of all was Tunguska in June 1908. Various theories have been put out, including meteorite, a small comet, antimatter, or even a visiting spaceship. There was no crater, only a series of small depressions, with numerous fallen trees. However I won't go any further as there is an extensive literature on it.