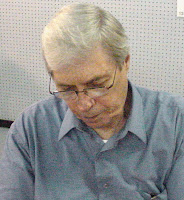 Tom Carey, (seen here signing a book at the Roswell festival in 2011) a UFO researcher living in Pennsylvania and one of the authors of Witness to Roswell, realized that there was a great deal of work left to be done on the Roswell UFO case. You might say that his dream was to pull all the information together, to locate and interview the witnesses who have yet to tell their stories, verify as best as possible the facts of the case, and write it all down in a coherent and rational analysis. To help with this project, Tom worked to bring together a team of researchers who understood this case. He succeeded in convincing both Don Schmitt and me to join him in his quest.
Don Schmitt had, in the late 1980s, realized there was still work to be done on the Roswell case. The surface had only been scratched by others. With the support of the J. Allen Hynek Center for UFO Studies, he began his research. One of the things he did was invite me to join him, believing that my military experience would be of help in understanding Army operations and in communicating with retired military personnel on their level.

As everyone who has been paying attention knows, Don (seen here are the Roswell Festival in 2011) and I had a falling out over some research techniques and matters unrelated to the investigation. While these seemed important then, it could be said that in time we reevaluated these issues. We reconnected after I returned from Iraq and it was as if no time had passed.
A couple of months ago Tom asked me if I was willing to join him in putting together what he thought of as the ultimate Roswell crash book. I was enthusiastic about the idea and readily agreed.
After Tom and I had discussed what we thought needed to be covered, Tom approached Don with the same idea. Don also thought it a good idea and the Dream Team was born (can I, as a participant, refer to it as a Dream Team?).
Although we are still, more or less, in the planning stages, we have already made some discoveries. I have learned of a doctor who might have participated in an autopsy of the alien creatures. True enough, we have heard this before, but the man is a doctor, was a doctor then, and is now willing to talk about what he had seen.
Also true, I have not verified all of what he said, but there are some indications that he is who he claims to be. I mention this only because it is one of the first things that we have learned.
We have also begun, again, to use FOIA in an attempt to learn more about the Air Force investigation of the Roswell case. This means, simply, that we have again gone to the Office of the Secretary of the Air Force to review documents that relate to their Roswell investigation. We wanted to know what transpired in the meetings, what was written in the memos, and what the internal reports might have said. 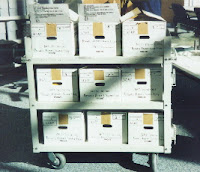 I tried this once before. I spent three years chasing this information, finally locating what they had at the National Archives in Washington, D.C. But all that was there was the results of that investigation and nothing about the internal operations of it (Air Force Roswell investigation files seen here. Instead there were video tapes of witnesses, most of them gathered for the Fund for UFO Research, a Court Martial of a doctor who was having an affair with a nurse in 1957 and completely irrelevant to the investigation, lots of reports on balloons and Mogul, but nothing that answered my basic questions. So now we’ve started that process all over.
What we want to do is distill the information. We want to eliminate the nonsense from the case, whether it is Air Force explanations or witness testimony that is irrelevant or untrue.
You might say that we are starting all over, on a cold case, reviewing everything related to determine what is important. Sure, we all believe that what fell at Roswell was alien, but we are going to take the path that leads to the truth. We will attempt to eliminate our personal biases in favor of determining what happened now nearly 65 years ago.
Periodically we will provide updates about the investigation, letting people know where we are going. We plan to pull it all together in a book that will answer the various questions as best we can. Yes, we know that we won’t be able to please everyone... what if we find a terrestrial explanation that actually works? Then the UFO community will be angry... And if we find that it was something alien, well, I doubt that the Skeptics will be satisfied.
So now we begin again, not from our own goal-line to be sure but somewhere down the field and this time we will find the answer and the proof to support that answer.
Posted by KRandle at 2:15 PM

I'm very excited about this project. I feel like whatever conclusions you men make, you will satisfy the skeptic in me and the seeker of explanations for the unexplained. Oh, and yes, you may call it a dream team because no doubt you've dreamed of being on a team like that.

Shane Ryan from Canberra here. I wanted to write to say best wishes to you and your other Dream Team mates on this new and exciting project.

I liked the "cold case" analogy. Six years ago I started a cold case approach to the 1966 Westall Flying Saucer Incident in Melbourne (Australia's biggest daylight mass-witness sighting of a low-level flying, and then landed, UFO), which resulted in a huge amount of new information, and hundreds of "persons of interest", being discovered. One important fruit of this research was the 2010 documentary film, "Westall '66: A Suburban UFO Mystery", which was broadcast in Australia last year. (See: www.westall66ufo.com.au)

One of the more interesting elements which emerged was that a military researcher (a former Lt Col in the Australian army), who was consulted, came to the conclusion, based on the description of soldiers' uniforms and vehicles seen at the site of the landing, that USAF personnel were present, possibly along with Australian military personnel. (So some of the people with the answers as to what it was that actually flew over and landed at Westall that day, may be in the US, and not in Australia.)

In this age of the Internet, social media, instantaneous communication etc, it is amazing what can be unearthed now that couldn't have been even a few years ago. Better still when you have the backing of a small team.

So best of luck for this rejuvenated Roswell project.

I think most likely the Roswell area itself has been just about exhausted. It's what happened after that that holds the key. Of particular interest to me is the establishment of the commercial titanium industry, underwritten by the budget hawk Truman at a time when defense spending was slashed to the bone, in December 1948.

"....we all believe that what fell at Roswell was alien." So much for approaching the subject with no preconceptions. Consciously or subconsciously, you will now search for evidence that supports your precenceptions. So we will see yet another Roswell book, and I know already what it will say.

If you have been paying attention, you'd know that we all have written extensively on the Roswell case. We realize that we reenter the arena with a bias, but I think of that as truth in advertizing, meaning, that we have to mention that we agree that Roswell represents something alien.

That said, we also realize that we need to put our personal beliefs aside as we begin to rework the case. Can we do that? I certainly hope so...

And I fully expect that the skeptics out there will be watching closely and will be more than happy to point out any stumbles we might make.

So, given the history of the case, we'll attempt to be as honest as possible, we'll attempt to turn over all the rocks, and we'll release all the information we have so that others can see how we drew our conclusions and then draw their own.

Kevin: Sounds like a worthwhile project, as there is still gold to excavate in this incident. Will the investigation be including any Q & A with the director of a famous baseball-themed film produced in 1989? Tom & Don were guests on "Coast..." radio a few months ago and received a call late in the program from a person who seemed to have been retired AF. The caller related a story regarding this director who was then the film archive head for the USAF (then at Norton AFB, I believe) who invited the caller (then a commissioned officer from the sounds of the call) to view (from the relatively anonymous safety of the projection booth) footage of an actual autopsy of a non-human entity, being shown to highly ranked and cleared VIPs. The caller said he declined the invite for fear of being detected viewing material he wasn't cleared to view. It was an intriguing on-air "outing" of this now-Hollywood director (his online bio does show he served in the AF; it would be interesting to see his DD-214). I'm certain Tom & Don would remember the call. Any thoughts?

"And if we find that it was something alien, well I doubt that the skeptics will be satisfied".

You have already found that it was something alien, all of you, and have repeated it ad nauseam.

So what is going to emerge from yet another book? Do you really expect hard evidence this time? Hardware, bodies or that alleged huge mountain of documents?

I await your revelations - but am not holding my breath.