Oak Island - The End is Near

The end is near, I believe. There were clues in the last episode, though I confess I didn’t pay close attention. I really no longer care about all the debris they are finding on the surface because it will not lead to a treasure… though it will lead to a solution. 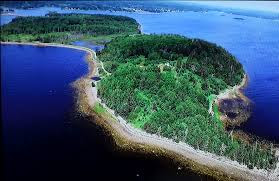 The analysis of the ox shoes found was interesting but only because their expert was able to provide such detailed information about them. We learned that there were shoes used in the winter for better traction and shoes used in the summer to protect the hooves from rocks and pebbles. It meant that the number of shoes they had found suggested a long-term occupation and the dates for the shoes put it in the range of 1650 to 1750. I’d bet it was closer to 1750.
The shoes and other material suggested it was the British military who had occupied the island at the time and I have to wonder if there are some records buried in some archives that would provide some documentation for this. We also have the discovery of the pine tar pit, of the infrastructure that suggests some sort of port or nautical repair facility, and the obvious use of the triangular swamp area that would have facilitated the repair of wooden sailing ships.
All of this leads us to the point where there is no money pit, but there was an occupation of the island for the repair of ships. True, with the British military there, someone would have had the expertise to design and build the money pit. It moves it away from pirates burying their loot to a military operation to protect something of value but that just seems to be a reach too far. The alleged system of booby traps seemed to be too complex for the builders to defeat, even if they had built them.
We know, based on the many dives and the work of the Lagina brothers that there is some sort of underground cave system that opens to the sea. So, rather than booby traps, we have a natural phenomenon that creates the illusion of booby traps. That, and a water table that is quite high seems to be the reason that those earlier diggers at the alleged money pit were unable to defeat the water. Everything they have found this season leads us to the solution that Joy Steele proposed a number of years ago. She talked about it at length on the radio version of A Different Perspective. Once again, you can listen to our discussion here:
https://www.spreaker.com/episode/12059035
The second clue, and I might be speculating wildly here, is what the announcer said last night. Seems to me, as he explains the situation, he used to say that the curse required the deaths of seven before the treasure would be found. I believe last night he said there had to be seven deaths before the mystery was solved.
The difference? Have they admitted, subtlety, that there is no treasure but just a mystery to be solved? The mystery has shifted from a search for that nonexistent treasure, but to who had built those facilities back some fifty or more years before the boys found the “money pit.” That answer seems to be the British military and I believe they abandoned Oak Island when better port and repair facilities were built on the main land and some what south of Oak Island.
But they didn’t leave any treasure buried there.
Posted by KRandle at 3:17 PM

I noticed they weren't beating us with "7 must die!" Although 3 of the searchers have died in the past few years, so they're already up to 9.

I also noticed David Blankenship was glaringly absent. He must have found the gold he was looking for when the Lagina's bought out his dad's share? Guess he was pretty smart after all.

They have to drag it out to at least the end of this season, or long enough to get everyone hooked on the spin-off "Beyond Oak Island."

Why all the underground tunnels then? I think you have become a naysayer in your old age.

Because you have had two hundred years of various companies and searchers digging holes and tunnels in an attempt to defeat the water booby traps. They really have found nothing to suggest that there ever was a treasure there and the evidence they have found point more to the British military using the island to repair their wooden ships.

I have been interested in this treasure for fifty years or so and wanted them to find something, but the evidence just doesn't support the speculation. It's not naysaying, it is facing reality.

The only thing this doesn't address is the bones, scraps of parchment and other evidence found at great depth. Although I wondered from much earlier about the guy who bulldozed a large pit and then filled it all back in. That must have really scrambled any evidence into a free for all.