World hero, super-intelligent human, and exposer of fakers, Kal Korff (seen on the left) has brought up my name in conversation on a radio

interview. Now I confess that I didn’t hear it and all I have is the report from a friend who mentioned it to me. Korff, according to him, said that I was claiming my Iraq service was more important than it was. He suggested that I was called to active duty because the Army didn’t have enough people and I was just filling in.
Well, Duh.
That’s the purpose of the Reserve Component of the miliary (here Reserve Component means both the Army Reserve and the National Guard). We train one weekend a month and two weeks a year to perform in roles to assist the Active Component. For example, the only water purification units in the Army are in the Reserve. Most of the Civil Affairs soldiers are part of the Reserve Component.
What this does is provide a trained reserve (hence the name Reserve Component) for the Army at a fraction of the cost of the Active Component. It calls on those soldiers, both officers and enlisted when it has specialized missions, or the Active Component is stretched thin. Sort of the situation that we have today. The Active Force deployed into lots of arenas with the Reserve Component picking up the slack. At one point a couple of years ago the majority of the Iowa National Guard was either in Iraq or Afghanistan.
The other comment, that my role in the war wasn’t as important as I claim it to be, confuses me. I’m not sure what I might have said anywhere in Korff’s hearing that would suggest such a thing. I was on the primary staff of a battalion which had its soldiers stretched from Mosul in the north to Kuwait in the south and from the Iranian border in the east to near Al Fallujah in the west. We preformed our mission to the satisfaction of the brigade commander and many of the soldiers were singled out for special commendation.
I am the only officer in the battalion to engage the enemy, but the gunfight probably resulted in fewer than 150 rounds expende 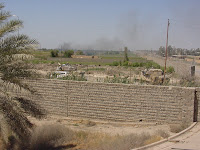 d on both sides. The LA police shot up more ammunition trying to subdue two bank robbers than we did in that fight. We did, that is the gunner in my Humvee and I, drive the terrorists from the field, which, of course was all that we needed to do. None of the soldiers with us was injured and we continued out of the kill zone just as training had taught us. None of the other vehicles were engaged.
Or maybe Korff is referring to the article that appeared in Soldier of Fortune about the Easter firefight just north of our battalion area (The Quick Reaction Force about fifteen feet in front of my position fire on an enemy position). Only one of our soldiers was injured. About a half dozen or so of the terrorists were killed and another dozen captured by the Special Forces. A couple of thousand rounds were expended in this fight.
But, again, thousands of other soldiers and Marines in Iraq have been more actively engaged with the enemy than anything I experienced in Iraq. I just don’t know what he means by his suggestion my service wasn’t as important as I have made it out to be.
This is not the first time that Korff and I have tangled. He believes that Roswell can best be explained by a weather balloon (okay a Project Mogul balloon) and to read his book, you’d think the theory was unique to him. Both Robert Todd and Karl Pflock had the idea earlier and I believe that Pflock gives the credit to Todd for originating the idea. Col. William Coleman floated (yeah, pun intended) the idea as early as 1988 (a tip of the hat to Brad Sparks for the clarification).
In his book (which I’m not going to name here because I have already given him enough publicity for his poorly researched and badly flawed work), he takes me to task for misleading the reading public and attacks my research abilities... Okay again, I believed Frank Kaufmann, but then so did others. Korff goes after my reporting on Air Force Brigadier General Arthur Exon in a way that suggests Korff’s claims of a superior intellect might be overblown. Greg Sandow, a somewhat disinterested third party reported on this on UFO UpDates, which can be accessed at:
www.virtuallystrange.net/ufo/updates/1997/may/m28-007.shtml.
But enough 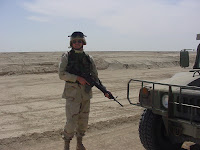 of this. My point is only to suggest that Korff’s attack might be more sour grapes than anything. He claims to be a captain in some organization that no one has ever heard of and complains about my service in the United States Army, an organization that can be found by searching the web. It is real and I can prove it. (As just a single example, here I am on the road from Kuwait to Baghdad.)
Those who are interested in more Kal Korff might want to take a look at Paul Kimball’s blog at
www.redstarfilms.blogspot.com so they can read about his assault on Kimball.
With luck, this will be the last I have to say on the subject of Kal Korff. And yes, I really hold a commission in a real live military organization. I didn’t have to invent one to call myself captain (which, for those of you keeping score at home, no longer applies. I have been promoted).
Posted by KRandle at 12:19 PM

Poor KKK. He tried the same thing with me and the law, by saying that I wasn't a practcing lawyer. Of course, I never claimed that I was. I've always been clear that I'm a non-practising member of the Nova Scotia Bar (have been since 1993), which is the status I took after I articled, passed the Bar exams, and was called to the Bar in front of a Supreme Court justice back in 1993 (like you, I have the pics to prove it). None of which makes me Clarence Darrow, anymore than your service makes you Audie Murphy. What it does mean is that I'm infinitely more qualified to offer opinions about legal matters than KKK, and you're infinitely more qualified to offer military opinions than KKK. As for UFO opinions, I've learned those are a dime a dozen, but even here, having read his books, poor Kal is a nickel short of that bare-bones standard - even when I might agree with him, as on the Meier case.

Korff's a pretender in every sense. A charlatan, a conflict of obtuse pretense, and a coward sniping from defilade, he presumes upon credulity as he insults intelligence.

Flatly, he lacks that most 'reasonable' intellectual sack and is only a sterling example of what would be a bizarro world Sean David Morton or a Philip Klass for 'our' side...(what a minute... that would be _you_, Major! LOL! ...kidding!)

That said, I suspect that Korff is _entirely_ sane and just laughing up a phony camouflage sleeve at a humanity for which he has no respect.

He _might_ be dealing with some cognitive issues. If that's confirmed? I'll step off.

Well, I think a hammer has to come down on his pointed little head wherever it appears.

Douse, stir and douse again... nuked from orbit just to be sure... all the while and at all times realizing that Triple "K"s still better and commands more institutional respect than, say, Rich Reynolds.

I spent a few hours listening to Kevin on Coast to Coast, tonight, with George Knapp. Subsequently, I was surfing the net for something - I can't even recall what, now - and saw some of this lunatic's videos. I would offer the following observations, for what they're worth. I'm not a medical professional, but, I do have a bachelor of science in psychology and I did some internships in mental health facilities. I think it's fair to say that this character is diagnosable with some sort of personality disorder (eg. bipolar disorder, borderline personality disorder...something). He makes grandiose, and, tranparently absurd claims about working for the Secret Service, having invented the "hyperlink", etc. Watching his videos I was torn between feeling sorry for this fellow and, alternately, wanting to laugh my ass off. Part of what makes this guy so plain "weird" is that, like a lot of emotionally unstable people, he's fairly intelligent and quite articulate! The main point that I wanted to make, here, is that I was actually shocked to find a reference to him on this blog. How could anyone possibly feel the need to defend themselves from slings and arrows which are, so clearly, being hurled out the windows of a psych ward? I mean this in complete sincerity - I think you actually demean yourself by mentioning this fellow on your blog. I think it's abundantly clear to anyone - with or without a psych degree - that this poor guy has bona fide mental problems. I actually feel sorry for the dude. Do you actually view this person as some sort of legitimate critic? C'mon!

You were our Intel Officer when we deployed to Iraq. I was in Alpha Company, the one from Michigan. Never knew you were so well regarded in the UFO community till I saw you on tv a few years ago.
We did start getting hit on a regular basis that week leading up to Easter. I distinctly remember you telling us there might be insurgents trying to get into our atea at BIAP. You said " if you see anyone in black,shoot them".
Sgt. Steven Petree Alpha Co. 156/234th Signal Bn

Glad to hear from you Steve...

I'd say "Thank you for your service," but then you'd have to say it back and it really isn't necessary.

I seem to remember me saying, "If you see an guy with an AK, that's ok. If he points it at you, kill him. If he had an RPG, kill him." I do remember that we had some things going on that last few weeks at BIAP...

Always good to hear from a fellow soldier.