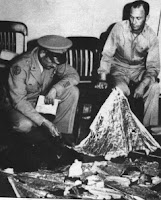 (And for those interested, look for Roswell Revisited, an examination of some of the latest information about the Roswell case, coming from Galde Press this summer.)
Posted by KRandle at 11:02 AM

is there a higher resolution image of the affidavit anywhere?