I thought that I would expand on this disagreement about what Barry Goldwater (seen here)knew and what he said about UFOs and the possibility of a crash outside of Roswell. I published a copy of the letter that Goldwater had sent to Kent Jeffrey in which Goldwater mentioned the Roswell case. Skeptics be 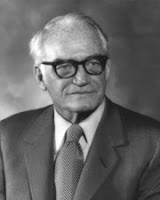 lieve, and I’m not sure they’re incorrect, that Goldwater assumed that the Roswell debris was housed at Wright-Patterson Air Force Base but he didn’t know.
Let me take a moment to explain that. Kent’s letter was from 1994, after Roswell had entered the national psyche. Jeffrey had asked about the Roswell case, so we can draw no specific conclusion from this, other than the answer might have been tainted by either the information in general circulation or by the specific questions asked by Jeffrey.
To continue in that vein, we know that in 1994, in an interview conducted by Larry King and broadcast on CNN, Goldwater said, "I think at Wright-Patterson, if you could get into certain places, you’d find out what the Air Force and the government does know about UFOs. Reportedly, a spaceship landed. It was all hushed up. I called Curtis LeMay and I said, ‘General, I know we have a room at Wright-Patterson where you put all this secret stuff. Could I go in there?’ I’ve never heard General LeMay get mad, but he got madder than hell at me, cussed me out, and said, ‘Don’t ever ask me that question again!’
While this quote does little to confirm the crash at Roswell, and it was conducted in 1994, it does establish that Goldwater asked LeMay about the "Blue Room" as it has come to be known, and that LeMay "cussed him out." Remember, some skeptics (okay, CDA specifically), had questioned this part of the story.
So, it proves that LeMay was capable of "cussing out" a friend and a United States senator. This would suggest that the topic discussed, and here we know that it was UFOs and the "landing" of a spaceship. This would suggest that there was a point that friendship ended and LeMay was talking to Goldwater as a superior officer to a subordinate.
There is another quote, this one from the April 25, 1988 issue of the New Yorker, that is also interesting because it predates the explosion of Roswell information. True, Charles Berlitz and Bill Moore’s The Roswell Incident had been published, but its circulation was limited to those interested in UFOs and its importance to the outside world was confined to UFO enthusiasts.
That doesn’t mean that there couldn’t have been contamination, just that it isn’t as easy to establish. In 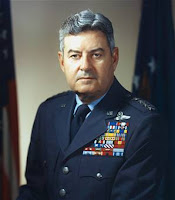 the New Yorker magazine, Goldwater is reported to have said, "I used to receive a hundred calls a year from people who wanted me to get into the Green Room [clearly he means the Blue Room] at Wright-Patterson Air Force Base, because that's where the Air Force stored all the material gathered on UFOs. I once asked Curtis LeMay (seen here) if I could get in that room, and he just gave me holy hell. He said, 'Not only can't you get into it but don't you ever mention it to me again.'"
In a web search I did find a couple of spots where it was reported that Goldwater had said that when he asked LeMay he was told, "Not only no but hell no. And if you ever ask again I’ll have you court martialed." I was unable to establish an original source for this, but I remember seeing it printed in one of the tabloids.
Yes, I know that’s not a good source, but they published a copy of the letter in which Goldwater made the statement. I have not found my copy of that. I saw it a number of years ago.
So, where does this leave us? Well, we have multiple sources which quote Goldwater (including letters he wrote himself) referring to the Roswell case specifically and to a UFO landing generally. We have him talking about it being highly classified, so high classified in fact that he could not gain access as either a United States senator or an Air Force major general. And he confirmed in those sources (I’m thinking the New Yorker and the Larry King broadcast would be hard to dispute) that LeMay cussed him out.
The only thing we can’t establish is if this referred to the Roswell UFO crash. It certainly suggests that there are some highly classified secrets out there that deal with UFOs and some sort of physical evidence from them. It also opens the door for the Roswell case... Goldwater did use Roswell in his later communications.
We also see some of the interesting dynamics at work here. LeMay, as a general (meaning four stars) read the Riot Act to his subordinate, a major general (meaning two stars). He made it clear that the major general would not be allowed to refer the material. Friendship, on this point, did not matter.
Had Goldwater attempted to do an end run by using his power as a senator, he would have had no more luck than he had as a major general. Powerful though he was as a senator, that simply didn’t open the door into this highly classified arena. Goldwater had the grace, and the intelligence, not to push it farther. He knew that was important enough to be kept secret and the moment that one senator was brought in, then others would want to know and at that point the secret was out.
Contrary to what the skeptics say, the situation has been established with a proper documented record. We know the story of Goldwater and LeMay is true, and, according to Goldwater, it concerned UFOs. What we don’t know is if it related directly to Roswell. I suspect it does, and Goldwater suspected it did, but that just doesn’t get us to the end.
Posted by KRandle at 10:46 AM

Whether or not the Goldwater incident was specifically related to the Roswell affair, there is evidence showing that there were physical samples of some different types related to UFOs in the hands of the Armed Forces:

1...Recent developments have prompted the attachment of increased importance to these samples...deposit having the same general characteristics...from Flat Woods, West Virginia.

2. In view of this possible relationship and the necessity for a prompt analysis of these two incidents, it is requested that utmost priority be given to the lab analysis of subject samples."

I don't see how they would feel it was of any importance at all if there was nothing to it.

Kent Jeffery once referred to the friendship between Barry Goldwater and Butch Blanchard.

Can this be confirmed? And if true when might this friendship have begun?

Kevin: As I said before Goldwater's approach to Curtis LeMay occurred during the time LeMay was USAF Chief of Staff. This was between July 1961 & Jan 1965. This long preceded any public knowledge of Roswell, and we can be certain, therefore, that his phone call had zilch to do with Roswell. It was more to do with information (i.e. AF files) on UFOs in general.
Re his response to Kent Jeffrey, dated 1994, Goldwater was clearly referring to this long ago contact with LeMay. I do not believe the 'court martial' threat for a moment (unless it was in jest of course).

Second, I have found references to Roswell that pre-date the Goldwater request... Why, newspapers from 1947 carried the story... True again, they explained it, but the information was out there.

Do I believe that Goldwater asked to see the "Roswell debris"? No. But he clearly wanted to see what had been gathered in the way of physical evdence.

Finally, we are reduced, once again, to what you believe... Goldwater said that LeMay was angry with him and I doubt seriously LeMay would have suggested a court martial in jest. The real question is if we can document the quote attributed to Goldwater about the court martial. I'm still trying to verify it.

He said, "Yes, that's the main event concerning me and UFOs. I was under the impression that a US Senator with a past as a Major General in the US Army Air Corp and a member of the US Senate Select Committee on Intelligence for many years would carry some weight in my allowances to enter such an area of military secrecy. I was rudely awakened to reality very swiftly when I was denied passage. It had me angry enough to discuss it with a personal friend of mine in the military and inquired why my position in the US Senate had no such allowance? My friend, General Curtis LeMay, Chairman of the Military Joint Chiefs of Staff at the Pentagon VERY angrily told me that I had no need to know. He gave me a lot of HELL about my activities at Wright-Patterson. He threatened to end our friendship for life! My God, Mac, that surprised the hell out of me." LeMay added, "you stay clear of our mutual friend, "Butch", too. ( meaning General William "Butch" Blanchard) his having been at Roswell (later Walker) Army Air base and the 509Th., will not gain you any favor for knowledge of that Roswell crash claim." Goldwater said, "Mac, Butch Blanchard was also a very valued friend of mine since WWII. He was the person who announced that a disc had crashed near Roswell in 1947. This cussing out did awaken me to one fact, that the UFO situation is the highest level of national secrecy. Much higher than the H-Bomb was and more than anything else that is known within the Pentagon

This is one of many incidents clearly poining to some very tightly kept secrets regarding anomalous flying objects.

Whether these obejects are the property of some alien visitors or earth-made using some generally unknown physical principle is however an interesting question.

Well, in my experience compartmented
intelligence is strictly controlled on a need to know basis. Why Senator Goldwater would expect access is a mystery to me. In the 1980s I saw very few UFO reports in back channel communications. One was a SIGINT report that captured a radio transmission made by a Soviet ELINT trawler in the Straits of Gibraltar in 1980 or 1981. An object approached at 2,000 mph and stopped instantaneously, did a falling leaf motion, and then took off at 2,000 mph instantaneously. Perhaps a bit of spoofing by the Soviets, perhaps not.