Awards of the Medal of Honor

I’m going to depart from the normal topics here for just a moment, though, this might be considered a different perspective. Our soldiers, Marines and sailors have been doing an extraordinary job in the Middle East for more than five years and I’ll bet that almost no one can name any of them unless he or she has served in the war zones. If I ask the question, those named will probably be those who have achieved infamy by bringing disgrace upon themselves, the United States, and the military. The media loves these stories because those of a soldier, sailor, Marine or airman doing something positive is just too common to be considered newsworthy. Who wants to read stories of soldiers, sailors, Marines and airman doing the good they regularly do.
Part of the remedy is to publicize the heroism of these patriots and I’m inspired to do this with the announcement published today that 19-year-old Army Pfc. Ross McGinnis of Knox, Pa., will, on June 2 be awared the Medal of Honor.
According toMcGinnis the announcement, McGinnis distinguished himself by extraordinary herois 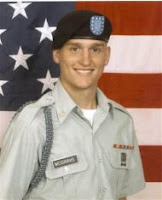 m in the gunner's hatch of a Humvee on Dec. 4, 2006, when a grenade sailed past him and into the truck where four other soldiers sat. He shouted a warning to the others, then jumped on the grenade that was lodged near the vehicle's radio. It detonated killing him but saving the lives of the four men in the vehicle with him.
McGinnis was assigned to the 1st Battalion, 26th Infantry Regiment, 2nd Brigade Combat Team, 1st Infantry Division, in Schweinfurt, Germany.
His will be the fifth award of the highest medal for valor given by the United States during the latest wars. The others are in Iraq: 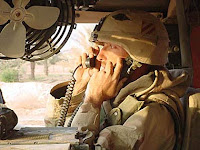 First Class Paul R. Smith distinguished himself by acts of gallantry and intrepidity above and beyond the call of duty in action with an armed enemy near Baghdad International Airport, Baghdad, Iraq on 4 April 2003. On that day, Sergeant First Class Smith was engaged in the construction of a prisoner of war holding area when his Task Force was violently attacked by a company-sized enemy force. Realizing the vulnerability of over 100 fellow soldiers, Sergeant First Class Smith quickly organized a hasty defense consisting of two platoons of soldiers, one Bradley Fighting Vehicle and three armored personnel carriers. As the fight developed, Sergeant First Class Smith braved hostile enemy fire to personally engage the enemy with hand grenades and anti-tank weapons, and organized the evacuation of three wounded soldiers from an armored personnel carrier struck by a rocket propelled grenade and a 60mm mortar round. Fearing the enemy would overrun their defenses, Sergeant First Class Smith moved under withering enemy fire to man a .50 caliber machine gun mounted on a damaged armored personnel carrier. In total disregard for his own life, he maintained his exposed position in order to engage the attacking enemy force. During this action, he was mortally wounded. His courageous actions helped defeat the enemy attack, and resulted in as many as 50 enemy soldiers killed, while allowing the safe withdrawal of numerous wounded soldiers. Sergeant First Class Smith’s extraordinary heroism and uncommon valor are in keeping with the highest traditions of the military service and reflect great credit upon himself, the Third Infantry Division "Rock of the Marne," and the United States Army.
In Afghanistan a single Medal of Honor has been awarded and was earned by Lt. Michael P. Murphy, a Navy SEAL.
According to the citation and other battlefield reports:
On June

28, 2005, four Navy Seals, Lt. Michael P. Murphy, Sonar Technician 2nd Class Matt Axelson, Gunner’s Mate 2nd Class Danny Dietz, and Petty Officer Marcus Luttrell, were inserted into the Kunar Province, Afghanistan on a counter-terrorism mission called "Operation Red Wing." Their objective was the kill or capture of a high level enemy fighter.
Before days end, nineteen men would be dead. Three of those Navy Seals on the ground would be dead, the fourth would owe his life to a brave Afghan who gave him sanctuary despite enemy demands to turn over the SEAL. A rescue helicopter, an MH-47 Chinook, carrying eight US Navy SEALs and eight Nightstalkers - members of the Army’s elite 160th Special Operations Aviation Regiment, would be shot down. All sixteen men perished. It is believed an enemy RPG (Rocket Propelled Grenade) downed to craft.
In the course of their mission, the four SEALs are believed to have been compromised by locals sympathetic to the enemy. The enemy immediately began to attack the four SEALs. Virtually surrounded by enemy forces, it was reported by the rescue helicopter that the SEALs put up "one hell of fight" [my words]. As it became obvious the enemy would soon over run the four men, Lt. Michael P. Murphey risk his life by leaving the safety of cover to go to higher ground and radio for help. Shot in the back and his radio now laying on the ground, Lt. Murphey picked up his radio and continued to attempt to radio for help.
Lt. Murphey, Sonar Technician 2nd Class Matt Axelson, Gunner’s Mate 2nd Class Danny Dietz were all killed by enemy fire. Petty Officer Marcus Luttrell survived. He was knocked unconscious during the fighting. When he revived, he found two of his fellow SEALs dead and the third no where to found. He was rescued a couple miles away by an Afghan local who found him and hid Luttrell in his village. The brave Afghan later notified coalition forces that Luttrell was safely hidden at his village. It is reported that the villager is said to have told the enemy fighters who demanded the SEAL be given to them that the SEAL was a "guest" and "would be protected to the last member of the village!"
"By his undaunted courage, intrepid fighting spirit and inspirational devotion to his men in the face of certain death, Lt. Murphy was able to relay the position of his unit, an act that ultimately led to the rescue of Luttrell and the recovery of the remains of the three who were killed in the battle" has been awarded the Medal of Honor. The Medal was presented at a special ceremony October 22, 2007.
I hope that those of you who regularly read this blog don't mind this short report. I just think we all spent too much time attacking one another and that when someone does something extraordinary, we should recognize it.
Posted by KRandle at 11:32 AM

Bravery and selflessness should be upheld over all else, and never be forgotten!

hey david, here is that site i was talking about where i made the extra cash this summer, it's pretty cool... anyway,
check it out ..

They are/were great guys but frankly I've had grave doubts about the Iraq war from the start.

That's as may be, starman, and I have differing thoughts on this, and previous conflicts, and we are certainly in our rights to have an opinion, but it doesn't follow the intent of the post.

It was intended to remind us of those who are able to rise above the confines of our material fears, for the sake of others. Especially during this time, I think it is more than appropriate.