For those who are interested, here is a quick rundown on the latest on the Ubatuba sample. I am assuming here that those visiting this blog have a basic knowledge of this case so that I don’t have to recap everything.
The very first problem is that the magnesium samples that allegedly came from an exploding UFO cannot be traced to the beach in Brazil where they were recovered. Instead, they can be traced to 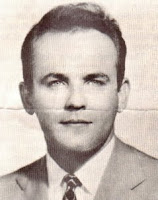 the columnist in Brazil who first reported the case in the newspaper and that alerted Dr. Olavo Fontes (seen here), the APRO Brazilian representative to the crash. No one has ever come forward, nor has anyone been located, who can corroborate the tale told in the letter to the columnist nor who actually saw the explosion or the UFO. The metal appears in the columninst’s hands and from there goes to Fontes, then to Jim and Coral Lorenzen (seen below)at APRO and then to various others. The chain of evidence is severed before we reach the beach in Brazil and that is a real problem.
Secondly, the claims of purity have not held up to scrutiny. When the early lab reports suggested no sign of contaminates, Fontes inferred this to mean that the metal was 100% pure, which is not quite the same thing. It meant that the labs conducting the tests had not found anything other than magnesium, not that there weren’t other compounds present. It would seem that subsequent tests have shown that the metal, while extremely pure, was not 100% pure.
Yes, I’m aware that the sample tested in Brazil was lost during the testing so it could be argued that this sample was that pure, but it seems that a more logical conclusion is that it suffered from the same contaminates as those other samples. The problem was in the technology available in 1958 as

opposed to that even eight or nine years later.
Third, the samples have been handled in a fairly cavalier fashion. Once they arrived in the United States, no one had kept track of them and it could be argued that the chain of custody was broken here as well. The Air Force destroyed a small sample given them for testing without obtaining any results. The Lorenzens loaned various samples and pieces of samples to any number of people and some of those samples have been lost. In the end, it might be nearly impossible to say that the samples as they exist today are in any way related to those that were first sent to APRO. Dr. Fontes died decades ago, as did the Lorenzens. That is another stumbling block.
But then we come to interesting conundrum. While magnesium of a purity equivalent to the Ubatuba metal was available, and that the testing done to date, regardless of the quality of the equipme

nt or competency of the researchers, no one has been able to identify a source of the original sample. It is unlikely that it is of extraterrestrial origin, but no one can rule that out.

Analysis of the Brazilian sample was made by Dr. Roy Craig of the Condon Committee, who has given a narrative account of his experiences with the Colorado Project. The results of his investigations into the Brazil magnesium are summarized in the Condon Report on pages 94 – 97 of the paperback edition.

According to the information published by Dr. Peter Sturrock, Craig said he had been informed that Dow had, for about 25 years, produced a number of batches of very pure magnesium by the process of repeated sublimation, and provided him with a specimen of triply sublimed magnesium. Craig was advised that the most sensitive tests for impurities would be neutron activation analysis. He therefore arranged to take a specimen of the Brazil magnesium and (for comparison) a specimen of the Dow triply sublimed magnesium, to the Alcohol, Tobacco, and Firearms Laboratory, Washington, D.C. This visit took place on February 5, 1968, and the specimen was analyzed by Mr. Maynard J. Pro, whose report on the analysis was mailed to Craig on February 29, 1968.

The results of Pro’s analysis of the Brazil specimen and of the Dow specimen are included in the Condon Report. Clearly, this specimen of the Brazil magnesium was not "100% pure." In fact, it was not as pure as the triply sublimed Dow specimen.
Condon then commented, "...the magnesium metal was found to be much less pure than the regular commercial metal produced in 1957 by the Dow Chemical Company at Midland, Michigan. Therefore it need not have come from an extraterrestrial source, leaving us with no basis for rational belief that it did."
But this wasn’t quite accurate either. First is the point that the magnesium created at Dow was not a commercial grade but a piece of triply sublimed magnesium. It was, you might say, magnesium created to see how pure they could make it, but not something they created for commercial application.
The analysis also reported on a high content of both strontium and barium in the Ubatuba sample. Neither is an expected impurity in samples made under normal circumstances but Dow, in their experimentation with ways to improve the "hardness" of the magnesium had used the strontium as an alloy.
So, the Condon Committee didn’t actually discredit the Ubatuba sample, and their discussion of the Dow metal is more of a red herring than scientific analysis. That said, we are left with a couple of samples of metal that have no provenance, that have not been found to represent a technology that didn’t exist when the metal was discovered, and with no real way of knowing if the samples of today are related to those samples found in 1957.
In the end there are several samples of magnesium that seem to be unique. There is nothing in them to suggest the extraterrestrial, yet there is a hint that these samples might not have been made on Earth. This, I think, would be the classic definition of "unidentified." But even with that, it is not proof that some UFOs are from other planets in other solar systems. In the very end we are only left with questions that might have no answers.
Posted by KRandle at 5:14 PM

I have never understood why people seem to think a UFO will be made of some strange and exotic unknown material.

Well, look at all the advances we've made in producing new types of materials. Interstellar craft may be subjected to all kinds of unusual stresses--micrometeorites, high radiation doses while colliding with interstellar molecules at near-light speed or even passing through wormholes. Great strength might be expected. In any event, without some kind of unusual property, one can't assume a fragment--if that is all one has to go on--is of nonearthly origin.

Kev, love the Forteanesque aspects of this case:

Ibrahim "Father of a multitude" Sued/'Pseud-';

Ubatuba - "many arrows or canoes": a good name for a place where a space "canoe" supposedly exploded into many "arrows", many of which've vanished unaccountably.

Of course anonymous donors've have placed mysterious items like this out in the open before vanishing untraceably all through history.

Sometimes such seemingly innocuous things've proved to be radioactively deadly as the likes of Alexander Litvinenko'd attest - if they were still alive.

Voodoo, for instance, as well as other black arts also use such apparently banal objects as the magical equivalents of satellite guidance devices for their malign intentions.

Makes you wonder if there might be other kinds of currently unknown or unrecognised (non-malign) 'radiations' or, say, well intentioned white 'magic' equivalents of the voodoo type stuff.

"Greys", the aliens that many talk about are not from another planet or universe, they are actually from our very own planet earth. They live mostly inside certain areas of the earth. Some people have seen UFO's coming out of the water or go into water. The caverns are deep down. The greys are very pale and look almost amphibian like. They can not cultivate wheat or some other of the grains that are on the surface. Is it possible that the crop circles are actually greys who have reaped some grain, but doing it in a artsie way? The reason why that these UFO's don't have some different metal is because these greys ARE from earth!

Little pieces probably won't ever be solid evidence. If you're going to invade a planet it might make better sense to build a fleet locally anyway -- easier to produce ships from local materials than to fly them across the galaxy. Unless astronomers spot new elements in the spectrum of a distant star and match that to debris on Earth, you can always argue that material is local.

Ok...wow. You did just say that. Amazing what people believe. Is this something you really believe? Amphibious humanoids? With no proof. Just...wow.