Real Aliens, Space Beings and Creatures from Other Worlds

Brad and Sherry Steiger (seen here) have turned out another winner with their Real Aliens, Space Beings and Creatures from Other Worlds. The title, I think, says it all. This is a book about aliens, t

hough not necessarily from other planets.
“What does that mean?” you might ask.
We’ll get to that in a moment. First I should point out that I have known Brad Steiger for decades. We have talked on the telephone many times, we have emailed one another frequently, and we have appeared on radio shows that the other hosted. I knew, when I had a Saturday evening show on KTSM that I could always call Brad at the last minute if a guest canceled, and I knew that he would be an interesting interview.
The first time that I spoke to him, which I’m sure he doesn’t remember was as I was writing my first book on the paranormal. As a reference, I was using a book he had written. I was interested in the story of Oliver Thomas, a Welsh lad who had vanished in 1909 as he carried water from the family well.
I happened to know where Brad lived at the time and I was able to get his telephone number from directory assistance. I called and asked my question about the case.
“It’s a hoax,” Brad told me.
He said that he had learned that after his book was published, but he was quick to point out the truth, now that he had it. His philosophy at the time was to believe what people told him until he learned that they couldn’t be trusted. I thought it was a fine philosophy even if it let you down sometimes...
My own experience has been that too many people will lie about too much for reasons that seem to be vague. They’ll lie for the personal glory. They’ll lie for the little fame it might bring them. They’ll lie to put one over on someone else. They’ll lie just for the hell of it.
Anyway, Brad was quick to tell me the truth and I certainly appreciated that.
So now we have a new book by Brad and Sherry and it is a compendium of tales about alien creatures that might come from other planets, might be travelers from our future or might be interdimensional beings. They cover all the theories here.
They begin with the biggest of the UFO cases which is the Roswell UFO crash and wind their way through the history of alien contact whether from the contactees of the 1950s, the abductees of the 1990s or the sightings by people of strange being 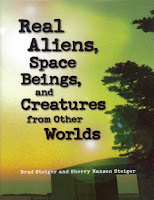 s throughout the centuries.
This is a book for the novice, who has just discovered the UFO field. It provides the basics to understanding where we have gone since the beginning, providing a glimpse into UFOs.
This is a book for those who have been around for a while but who have had their research diverted into one of the many subset of the UFO phenomenon. It provides the basic information so that detailed research can be designed for a long term study.
For those who wish a good primer on UFOs, and for those who wish an encyclopedia of information about the last fifty or sixty years of alien adventures, this is the book to have. It is literally everything to everyone.
If I were to complain about it, I would mention that it is not as detailed as I would like, but then the book would probably have been so big that you’d need a crane to lift it. If there is a case for which I need additional information, Real Aliens, Space Beings, and Creatures from Other Worlds provides the starting point. It gives me the clues I need for my specialized research.
This is one of those books that belongs in every UFO researchers’ library. And if you’re not one of those, a UFO researcher, then it is just a fun read. Informative, provocative, and intelligent. A valuable resource.
Posted by KRandle at 10:59 AM