While in Roswell I had a chance, brief though it was, to talk to Stan Friedman. He had come up to me as I ate breakfast and suggested that I was probably correct about Robert Willingham which is surprising. Oh, not about Willingham because it’s pretty clear that he never served as an Air Force officer or a fighter pilot, but because of what it suggests about the MJ-12 documents. If Willingham’s tale is discredited, then MJ-12 is discredited because it mentions the Willingham story and there is no other source of information on Del Rio (or the El Indio – Guerrero UFO crash as it was disguised there). 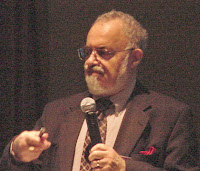 When I said to Stan that there was no evidence of a Del Rio crash, he trotted out his propaganda argument that “Absence of evidence isn’t evidence of absence.”
My immediate reply was, “It is when due diligence has been preformed,” which, of course I had done (and which, of course, sort of attaches a legal term to the argument).
But this whole thing got me to thinking about this “Absence of evidence” line and what it really means. It is the last ditch effort to support a concept, idea, theory, or story that has nothing else to support it. Stan didn’t suggest other sources of evidence for the Del Rio crash, he didn’t offer additional witness testimony, he didn’t produce newspaper articles that talked of some kind of UFO event in the area in the right time frame (which according to Willingham’s various tales was 1948, 1950 or sometime in the mid-1950s). No, he just quoted his line as if that ends the argument.
With that sort of an argument, no rational conclusion can be drawn. It doesn’t matter how much time, effort, or money has been put into an investigation. If you found nothing to support the story, then the fallback position is always, “Absence of evidence...”
Here is where we are with the Del Rio crash. The only witness to ever mention it has invented his military career and if he wasn’t a fighter pilot, then he was not in a position to see the UFO crash. If he wasn’t an Air Force officer, then he was never an Air Force fighter pilot and his story fails on that point.
Yes, Willingham has named other witnesses or potential witnesses, but then all of them are dead (which, coincidentally is the same problem with MJ-12... all the men named were dead before the document appeared). There has been no way to verify this story. We must accept it as Willingham tells it.
The only other reference to this case is in the MJ-12 documents. There are no other witnesses, no newspaper stories (and before you get wound up on that, remember even Roswell was mentioned in the newspapers, as was Las Vegas, Kecksburg, Shag Harbour, and several other suspected and alleged UFO crashes), and there nothing in the Project Blue Book files.
Nothing.
You must remember that if there was no Del Rio crash, yet it was mentioned in MJ-12, it would be the final, fatal blow to the Eisenhower Briefing document. There is no reason to include a hoax in the document, a hoax that wasn’t created until 1968, which, of course, means the author of the Eisenhower document was clairvoyant or the document was created after 1968. With Willingham’s latest date change, the crash didn’t happen until after the 1952 date appended to the Eisenhower Briefing Document, and is just one more suggestion the document is fraudulent.
So, let’s look at this “Absence of evidence” idea. In science, sometimes, the absence of evidence is evidence of absence.”
Take The Dinosaur Heresies by Robert T. Bakker and published by Zebra Non-fiction in 1986. On page 116, Bakker wrote, “A careful investigation of the quarry made it clear that something was wrong with the deep–lake theory. As a carcass sleuth looks for clues, he or she must be alert for negative evidence; sometimes what’s missing reveals more than what is present. And negative clues were everywhere in Sheep Creek. No fish bones or crocodile bones and almost no turtle remains (only one fragment of shell) were ever fund in the Sheep Creek limestone.”
In other words, “Absence of evidence is evidence of absence.”
Here’s where we find ourselves today. Robert Willingham is the only source available for the Del Rio crash and he has changed the location, date, number of UFOs, type of aircraft, and a host of other details three times. There is no other source.
Willingham was interviewed by Todd Zechel who was working with William Moore and the Del Rio case appears in The Roswell Incident. (And no, this isn’t a new source, but one that is traceable back to Willingham). It then appears in the MJ–12 papers because everyone thought that Willingham was a retired, high–ranking officer whose word could be trusted. If there was a Del Rio crash in 1948 or 1950 (depending on which version of Willingham’s story you trusted) and it was not included in MJ–12, well that would be evidence of a MJ-12 hoax. No one thought in terms of the Del Rio crash being faked when the MJ–12 papers appeared in the mid–1980s because, it seems, everyone accepted Willingham as authentic.
What evidence is there that something crashed near Del Rio, Texas, at any point in time? There is none. Nothing. The only conclusion to be drawn is that the Del Rio crash is a hoax (a much nicer word than lie) and if that is true, then the Eisenhower Briefing document is a hoax.
Unless, or until, someone can provide any sort of additional and credible evidence of an event near Del Rio, or the El Indio–Guerrero area, there is nothing more to be said. It is a case where “Absence of evidence is evidence of absence.”
Posted by KRandle at 6:03 PM

When you're discussing how the Truman Administration operated, there certainly is no shortage of evidence.

There's no reason to think that any sort of briefing of Eisenhower during his transition into the Oval Office regarding flying saucers would have been put in writing. Every indication is that if such a thing did happen it was an oral briefing only.

Quote: What evidence is there that something crashed near Del Rio, Texas, at any point in time?

know that you and Barry Greenwood have known about the October 12th incident for years. Mr. Greenwood even uses one of the documents to argue against the "Ramey Memo" being a classified military memo. It is close enough to the "Del Rio" story, so why is it totally ignored? So much time has passed by now that we would have to enter a war zone to find any witnesses to interview. And you still use the guilt by association (re: the Del Rio hoax)to make it seem that nothing ever happened. I certainly don't claim to know what it was, but it was either:
An errant rocket that was not recorded, or it is a truly "unknown" object impacting (because there are no obvious records of a major meteor impact on 12 OCTOBER 1947.)

It was far too dramatic an incident for it to have been nothing.

The incident to which you refer suggests something fell near El Paso, Texas and nowhere near Del Rio. The date is October 1947, but Willingham would have still been in flight school, if he ever really attended.

While this event is interesting, it has nothing to do with Del Rio and is not the event to which the Eisenhower Briefing document referred. We're still left with nothing to suggest the EBD is real.

BTW, I cover that event, based on my review of the Blue Book documents in Crash - When UFOs Fall from the Sky.

Better to challenge Stan Friedman with the retort:

"What do you accept as evidence of absence?"

Example: there is a complete absence of evidence for Santa Claus (other than those who dress up as SC at Xmas time).

Absence of evidence is not evidence of absence is what nearly every response from Roswell investigators and advocates amounts to when I ask them certain questions (plus their implication that my queries are about trivial things).

My response is to direct their attention "to the curious incident of the dog in the night-time."

Logic often suggests that evidence, though absent, must exist (or have existed). This might be what Mr Friedman meant since he accepts the document in question to be authentic. If it mentions "Del Rio" then, logically the document being authentic, "Del Rio" happened, thus discrediting Willingham does not discredit "Del Rio".

NB (I am not in support of Mr Friedman or MJ12. I avoid the 3Ms (Mogul, MJ12, Memory Metal) as if they carried the plague)

I'm sorry I haven't read that one yet. Is there any new info about the case, or is it simply an overview report on whats in the BB files?

I used the information that I picked up through Blue Book. I have some other leads, but they have yet to bear fruit.

Bob, I could add a couple more Ms to it...mystery, morphing.... Seriously, I'm not disparaging the three Ms (ok. I'm disparaging Mogul.) or interest in them. My interest is in the Roswell news stories.'Witness era' information that is associated with the news stories (such as statements by Marcel Sr, Walsh, Haut etc) is in my chosen domain, as well. But MJ12 and memory metal are not.

I recently read "Captured!" Friedman's contributions are along the same line: mere propaganda. He seems to think that discrediting critics proves his argument by default. This runs along the lines of what Kevin tells us here.
What I found most laughable was a recent post by Stan at UFO Updates where he denounces skeptics for not looking at the physical evidence of the Hill case, and first in his list were the spots on the trunk. What Stan seems to forget is the UFO investigators NEVER looked at this evidence, even though they were told about it! The Hills never named the tenants they claimed saw the spots; Fuller never interviewed and so did not quote these alleged witnesses.
So that evidence is entirely anecdotal now...the Hills are the sole witnesses...but in Stan's ever-certain mind, this is physical evidence ignored by skeptics, not evidence ignored by claimants or ufologists.