Just yesterday (Saturday, March 12) I noticed a problem. I have been doing many radio shows/podcasts talking about my book, Levelland. I sometimes mention that the first of the UFO sightings in the area, that is, the panhandle of Texas, took place at 3:30 a.m., near Canadian. To my horror, I realized that I had confused some of the information about that sighting with another one that took, not all that far away, in Temple, Oklahoma. Time to straighten this out.

According to the information provided to Project Blue Book in the days that followed, the observer whose name was redacted by the Air Force, rounded a curve. He then drove over a slight knoll so that his headlights played across an object sitting in a field near the road. As he approached there was a flash of light over the car and his headlights went out.

He then stopped about a hundred feet beyond the submarine-shaped craft. He estimated the UFO as being as long as two or three cars and about eight feet high with a conning tower at about the midway point on the object. There was a white flag attached to its top and a humanoid figure that wasn’t described, standing by it.

The witness started to back up, thought better of it and started forward again. As he drove away, his headlights came on again. He didn’t see the craft depart and reported no other effects of his close approach.

The Project Blue Book file on the sighting contains a bare bones report and little else. The conclusion is that the source is unreliable, which is almost the universal conclusion when a witness, or witnesses, claim to have seen some sort of being or creature associated with the craft. Apparently, the report of a creature was sufficient reason for project officers to decide that no further investigation was required.

There is one thing that is surprising about the sighting. The “Project Record Card” in the Blue Book file mentioned that it was a “military and civilian” sighting. On the Air Intelligence Information Report, which was collected on November 4, 1957, there is the name of the military source. According to that document, T/SGT Alfred A. Calvin, who was assigned to the 386th Fighter-Bomber Squadron, at Cannon Air Force Base, near Clovis, New Mexico, was the military witness.

All that is known about the second source is he was a civilian, who, in 1957, was 41, and whose name has been redacted from the form. The civilian was from Enid, Oklahoma, and was a Civil Service employee at Vance Air Force Base, Oklahoma. There is no indication in the file that any Air Force investigator interviewed the civilian source. Given the fact, based on the assignments of the witnesses, they were independent of one another, so that an interview with the civilian should have been conducted. It might have yielded some important information and would certainly have improved the credibility of the T/SGT Calvin. 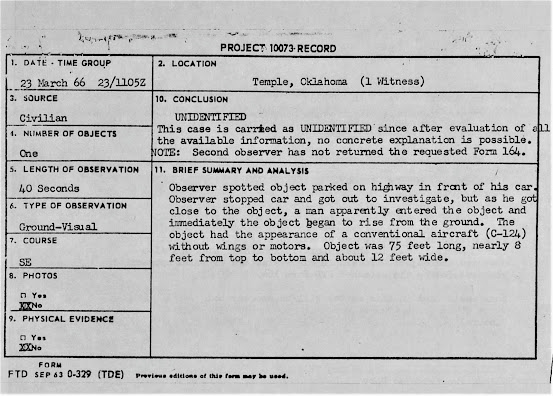 According to the Project Blue Book files, the case is labeled as Temple, Oklahoma, and is dated as March 23, 1966. That file said:

Observer [W. E. Eddie Laxson] was driving his car along the highway at approximately 0505 [a.m.], 23 March 1966, when he noticed an object parked on the road in front of him. He stopped the car and got out so as to get a better view of the object. The object was so parked that it blocked out a portion of the road curve sign. There were no sharp edges noted by the observer. The object had the appearance of a conventional aircraft (C-124) without wings or motors. There was a plexiglas [sic] bubble on top, similar to a B-26 canopy. As observer approached, he noticed a man wearing a baseball cap enter the object by steps from the bottom. After the man entered the object, it began to rise from the pavement and headed on a southeasterly direction at approximately 720 mph. The object had forward and aft lights that were very bright. As the object rose from the ground, a high speed drill type of sound was heard, plus a sound like that of welding rod when an arc is struck. Object was 75’ long, nearly 8’ from top to bottom and about 12’ wide. There were some type of supports up the bottom of the object.

After the object disappeared the witness got back into his car and drove approximately fifteen miles down the highway. At this time the original witness stopped and talked with another individual who had also stopped along the roadway to watch some lights over Red River which is approximately five or six miles to the southeast.

Various organizations were contacted around the Temple [Oklahoma] area for a possible experimental or conventional aircraft. The observer stated that he thought the object was some type of Army or Air Force research aircraft. All attempts at such an explanation proved fruitless, since there were no aircraft in the area at the time of the sighting. Although there are numerous helicopters and other experimental in the area, none could be put in the area of Temple at approximately 0500, 23 March 1966. Because of this factor the case is listed as unidentified by the Air Force.

The second witness, who was not interviewed by the Air Force and who, according to the Blue Book files did not fill out their report form, was C. W. Anderson. Anderson confirmed for the newspaper that he had seen the craft as well. He told the reporter, “I know that people will say that Laxson is durned crazy. But that’s what I saw.”

Anderson said that he thought the object had been following him down the road. He had watched it in his rearview mirror for several miles. The problem for the Air Force was that Anderson did not see the pilot or crewman.

The drawing of the object made by Laxson, resembled, grossly, that Lonnie Zamora had made of the craft he saw in Socorro, New Mexico in 1964, which means it was sort of egg-shaped. It was certainly longer and was lying on its side. Like Zamora, Laxson said that he saw symbols on the object, but unlike Zamora, he recognized them. He told the report that, “On the side I made out… ‘TLA’ with the last two figures ’38.’”

In what might be described as a fit of honesty, the Air Force admitted they had no solution for the case. The description of the “alien” was more human than humanoid and he seemed to be dressed in conventional clothes right to the “mechanics” hat. Investigation revealed a second witness and that might have influenced the Air Force, especially since the men had never met prior to the sighting. In the end, they labeled the case as “Unidentified.”

Here's the point, I thought the being, entity, creature, sighted at Canadian, had been human-like and wearing a baseball cap. That is the description for the Temple UFO sighting. Notice that there was no description offered of the creature offered for the Canadian sighting, just a rejection of the information even with two independent witnesses involved.

And to be sure that we’re all on the same page here, let me note that the Canadian EM Effect was the headlights going out but not the engine stalling. Of course, in the Temple case, there was no apparent EM Effect.

I think this straightens out the confusion. There was a creature in both sightings, but it was only in Temple, Oklahoma, that the entity was described. Of course, the other difference in is that the Canadian case was written off as unreliable but oddly, Temple was considered unidentified.

For those interested in such things, I did contact the newspaper in Canadian and received a very nice response. Unfortunately, they didn’t have any article about that particular UFO sighting. I was hoping that a report would provide the name of the civilian witness.

I don't know what to make of these non-aerodynamic aircraft from the mid 60's, seemingly piloted by blokes wearing bump caps.
Was there some kind of prototype technology from that period that was good, but not good enough, so was shelved?
Wingless and with verticle takeoff ability...you'd have thought a project like that would have been seen as having potential and therefore we'd be seeing that stuff being used today. Also, the speed judged as "720 MPH" is rather bizarre.
Difficult to take this one seriously.