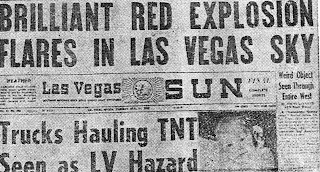 She wrote to the newspaper and was told they couldn’t help her because their archives had burned on November 22, 1963.

I found the excuse just a little far-fetched and wondered if they had blown her off they way they had me so long ago. I was chasing the same story, but I happened to be in Las Vegas and while the newspaper wouldn’t help, the local library and its microfilm could. I found the article and the accompanying story.
But this reminded me of the conversation I had with one of the reporters at the newspaper. One of the people mentioned in the article was Frank Maggio, described as a staff photographer. And, of course, was Jim Stalnaker who was the reporter on the story.
The reporter I spoke to was friendly, right up to the moment I mentioned UFOs. Then she turned hostile, lecturing me about the subject, claiming that she had never seen one and that proof of their visitation didn’t exist. To her, I was chasing ghosts.
I told her that the initial information had come from her newspaper and she said, "It’s all heresay. You can’t believe anything you read in the newspaper."
Let’s stop for a moment and look at that. A reporter for the newspaper just told me that you couldn’t believe anything you read in the newspaper. I thought that was a strange attitude for a reporter and if I had a subscription I would have cancelled it right then, citing as the reason that one of their reporters had told me I couldn’t believe anything printed in their newspaper.
But, since I knew that one of the witnesses, Frank Maggio worked for the newspaper, I asked about him.
"They’re all dead," she told me.
"Family?"
"No family. They’re dead."
This, I believe could be called the classical "dead end..." if I wanted to make light of it. But since she was hostile, and lying to me, I hung up and then looked in the Las Vegas telephone book. I found no listing for Frank Maggio, but did find one for a Maggio Photo Lab. Thinking it had to be the same guy, I called. It was.
He couldn’t remember anything about the sighting that wasn’t in the newspaper story. He had said that it was a "tremendous flaming sword." There was a series of bright explosions that broke up the trail across the sky and that it had vanished east of Las Vegas.
Over the next few weeks, I talked to twenty or thirty people who had seen something that night, read the Project Blue Book files on it, and although there had been a rumor that nothing about this event was printed in the newspapers, I found many articles about it. The object, whatever it was, had been seen as it crossed the United States from east to west, was tracked by radar, and seemed to make a looping turn over Reno so that it was heading to the south and then east when it appeared in the Las Vegas sky. Those watching it lost sight of it out near Mesquite, which is on the Nevada - Utah border.
The story is quite complex and I have done a long write up about it in A History of UFO Crashes, for those who wish more information.
But the point here is that sometimes those with the information just don’t want to be bothered with supplying it. That’s why I have put the entire newspaper article here, for those who might want to see it and can’t to Las Vegas to look it up for themselves.
The article follows: 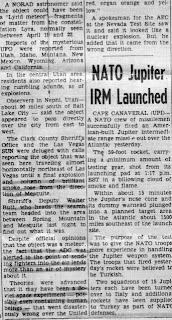 An oddity: November 22, 1963, i.e. the day that newspaper archives burned, was the day of JFK's assassination. Now there is a new JFK-UFO link for those interested in such things!

I want to thank Dr. Randle for answering my e-mail so kindly and for putting this famous old article up here for all at his blog site.

As the commenter above me, CDA, noted, the letter I got from the librarian at the Las Vegas Sun said the newspapers' archives burned on Nov. 22, 1963, yes, the same day we lost JFK. I sort of had the same thoughts as CDA did, about what a grim coincidence it was.

Upon goo'ging around and finding this link:

which is a little history of the Las Vegas Sun, I see it says the fire happened on Nov. 21, 1963. Well, maybe the info I was sent was a little bit off.

Actually, I phoned the Las Vegas Sun to ask for the article and I apologise for not making that clear when I e-mailed you, Dr. Randle. Anyway, yes, when the librarian was asking me what the old article was about, as soon as I got close to UFO, I got the same, instant, "that's silly" kind of treatment as Dr. Randle talks about. I said something on the phone like..."Well, the story probably mentions a meteor fall, or, it may say an object crashed. See, there is some lore around this old story that an object may have crashed that night, out there on the Nellis range, near Mesquite".

The librarian quickly said that was impossible because "it's BLM (Bureau of Land Managemment) land" out "by Mesquite", so, I was meant to understand, I guess, that I was chasing a doubtful story.

But the librarian said I would be mailed any stories about it which could be found. A week later, I got a letter with a story about the meteor fall near Eureka, Utah. The librarian said the story had been typed into the letter because it would not scan. The story, dated Friday April 20, 1962 was titled, "ASTEROID STARTLES WEST".

There may well be no mystery here at all, but I thought it was funny they could find their old story from the 20th of April, 1962, but not the 19th.

I certainly do encourage any and all to read Dr. Randle's account in his, "History of UFO Crashes", which he mentions at the end of his blog entry.

-quoted from MAJIC EYES ONLY, by Ryan S. Wood, c.r. 2005, Wood Enterprises
"Randle also communicated with an anonymous man who claimed to be an Air Force lieutenant at Nellis Air Force Base, Nevada in 1962 at the time of the crash. He and 30 others, claimed the man, were driven into the desert early the next morning to "secure and clean the area" where an unusual object had crashed in the desert. They were loaded into a bus with blacked out windows, but one window was not entirely covered, and the man claimed to have seen a damaged saucer-shaped craft. Randle's source claimed it to be merely an 'experimental plane, the existence of which had to be protected from the soviets due to national security considerations"
-April 18, 1962-The Las Vegas Crash, Kevin D. Randle, Ph. D., Mutual UFO Network Proceedings, 2000'

As you mention in your book, "A History of UFO Crashes", Friend and Hynek investigated this incident. It would seem odd if there were a recovery operation under way, as the whole MoonDust/BlueFly program was begun with Friend, in place via Combat Intelligence Command (AFCIN). You'd have thought maybe he would have been aware of such a recovery effort.

Is there any more information regarding this part of the story that you might be able to share with us?

Sounds fishy. Reminds me of Kingman. If they were diven there to recover the object, why did he only see it through a partially blocked out window? Also, how could there be a recognizable saucer after such a big explosion or series of them?

Nice piece Kevin. Keep it up.

I appreciate how you took their resistance as more of a lazy dismissal and nothing overtly conspiratorial. I loathe the perception that conspiracies lurk everywhere; I think it's paranoid and counterproductive. Moreover, the case for surly, arrogant workers with no regard for customer service is far more plausible. Hell, just step into any given store these days. Our society is replete with poor customer service.

As for the account itself, it is very interesting. Wasn't there another recent Vegas area "crash"?

I don't know about an supposed crash DATED more recently than '62, but there was a report of a 1949 crash in Nevada, reported more recently at least. I'm skeptical.

"AFCIN" does not stand for some sort of "Combat Intelligence Command." It was the org code (office symbol) for U.S. Air Force Intelligence. The "C" did not stand for anything and was an arbitrary letter. In 1963, AFCIN became AFNIN and obviously the "N" meant nothing.

While it is true that AFCIN does not specifically "stand" for Combat Intelligence, I personally feel it should be stressed that:

d. Wartime employment of AFCIN intelligence team capability is
currently primarily geared to the CONAD/NORAD air defense mission
(Atch I). The intelligence team concept was originally developed
within the Air Defense Command (ADC). The ADC Director of Intelligence
was charged in 1953 with organizing the 4602d Air Intelligence Service
Squadron (AISS), with a wartime mission of exploiting downed enemy
"people, paper, and hardware" for intelligence information that would
contribute to the air defense of the continental US, and ADC was
allocated manpower for this function (ADC Regulation 24-4, 3 Jan 53,
Organization and Mission of the 4602d Air Intelligence Service Squadron).

The AISS was originally the first line of Combat Intelligence/Defense.

Kevin-
The witness you mentioned from Nellis AFB who claimed to be on the
recovery team. Could you give his name?