Billy Meier Beyond the Time Barrier

I know that it is best to let sleeping dogs lie (and you can take that two ways considering where I’m going with this), but I saw something that set me to laughing. I was watching an old 1960 science fiction movie, this one Beyond the Time Barrier. It takes place in both 1960 and 2024 after a pilot in an experimental aircraft somehow “breaks” the time barrier. 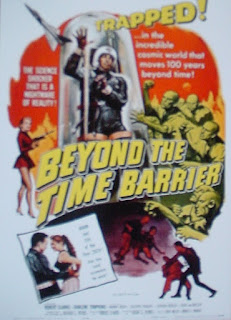 The world of 2024 is nothing like I imagine it will be not so far in our future, but in the movie, it is 64 years in their future (and, technically 64 years in the future for those who made the movie). According to their history, we had reached the moon and there were human colonies on both Mars and Venus (and I’ll bet the air conditioning bill on Venus is astonishing). But there was some kind of plague that had devastated the human population turning it into those who were mutated and those who weren’t quite as mutated.

Okay, so at about 33:00 minutes into the movie, we get a little bit of this alternative history. One of those scientists who hadn’t traveled through time said to the major who had, “The plague we’re talking about hadn’t happened in your world in 1960. It began in 1971.”

“No, no. The feared nuclear war never occurred…”

“If it wasn’t nuclear war, what caused it?”

And here is where we find the world of the UFO meeting the world of science fiction. The answer was, “A bombardment of toxic radiation from outer space… The people of your world are concerned about nuclear fallout. Well, the danger is in the other extreme. The tons of radioactive dust that has mushroomed up into the ionosphere [though he might have said atmosphere] from the very first A-bomb test… that dust has remained up there and it is slowly destroying the protective screen that has filtered out cosmic rays from outer space since time began.”

Sound familiar? Can we think of anyone who has made a similar claim in our shared reality?

The major then said, “Then all the nuclear explosions that have ever taken place have contributed to this.”

So, here we have a claim that atomic testing has damaged the ozone layer though they refer to it as the protective screen that was made in 1960. It preceded that made by science by a number of years and beat Billie Meier by what, a decade and a half?

Yes, I know that his supporters will say that he never saw the movie (and yes, it was a pretty crappy “B” movie) but there is no way of knowing if he ever encountered it in his worldly travels. I will note that I saw The Good, the Bad and the Ugly on three continents in the late 1960s, so it is certainly possible. (North America, Australia and Asia, though much later I also saw parts of it in Europe which ups the count to four).

The point, however, is that this sort of thinking, that atomic testing had depleted part of the ozone layer had been around a long time before Meier ever mentioned it. You just can’t say that no one was talking about it before Meier brought it up because the idea had filtered down, into some rather cheap science fiction of 1960 and was an old idea by the time Meier got to it.
Posted by KRandle at 9:35 AM

Great find Kevin!
I have now updated my BMUFOR article with this information.
http://www.billymeieruforesearch.com/prophecies-predictions-probability-calculations/analysis-of-contact-reports-1-100/#Atom_Bomb_CFCs_Bromine_Ozone_Hole

Please note that there is no documented evidence that Meier said anything about atomic testing and the Ozone Layer until long after the movie was out, and several newspaper articles had expressed concern. The original claim was that Meier couldn't have seen those earlier comments, but now the goal post has been moved again, but without proper documentation.