For those of you new to the UFO field, welcome to 1947. You might wonder what I mean by this. In a statement that almost could have been written in late summer 1947, the Department of Defense has announced the formation of what they call the Airborne Object Identification and Management Synchronization Group, which is not a name that inspires confidence. This new organization will be overseen by the Under Secretary of Defense for Intelligence, the director of the Joint Staff and officials from the Office of the Director of National Intelligence.

Deputy Secretary of Defense Kathleen Hicks said in a separate statement the presence of unidentified aerial phenomenon (UAP) in restricted airspace poses a potential safety risk to aircrews and raises potential national security concerns. Of course, we all know that she means UFOs, which we were told more than fifty years ago posed no threat to our national security, posed no hazard to aerial navigation and that nothing could be learned by further investigation. It was a waste of taxpayer money (as if that is really a concerned at the highest levels of government).

The new group which will succeed the U.S. Navy's Unidentified Aerial Phenomena Task Force, will work to detect, identify, assess and mitigate any associated threats, the Pentagon said which, of course was proceeded decades ago by Project Sign, Project Grudge, Project Blue Book and several classified programs that included Moon Dust. I will bet that they’ll bring in a bunch of people who don’t know the history of the phenomenon so that they’ll just make the same mistakes that have been made for last 70 years. Some of us actually had top secret clearances and could provide some useful insight. I just wonder what has changed.

Don’t get me wrong, I’m all in favor of this effort and it does seem to validate the work done by so many of us over the years to interest science, the military and the government in the ongoing problem. But we are running down the same path that was followed for so long. I don’t believe the Deep State will allow this to flourish.

So, while the government and congress make proposals that never seem to go anywhere, there have been some interesting sightings. For example, on November 10 of this year, the witnesses saw two lights that faded in and out. They stopped and changed directions. One of the witnesses pointed a spotlight at the lights and two minutes later a huge, V-shaped craft, with no lights and no sound flew over a nearby house. The craft was so big that the witness couldn’t see all of it. He said that it didn’t stop. He said that the craft was a metallic color which I take to mean that it was a silver or grey.

In a strange one from Leavenworth, Kansas, the witness said that a formation of about nine white orbs seemed to be mimicking a flight of F-16s during the Veteran’s Day Parade. The witness claimed that prior to the flyby, the orbs were forming and reforming in various groups and noticed that they would disappear and reappear at incredible speeds. At times one of the orbs seemed to be in, what was described as “an over watch position, while at least six were in a three by two formation.” After passing the flyby, they formed a four-point formation and then all of them disappeared to the west at high speed.

You can access the rest of the story and additional information about the picture here: 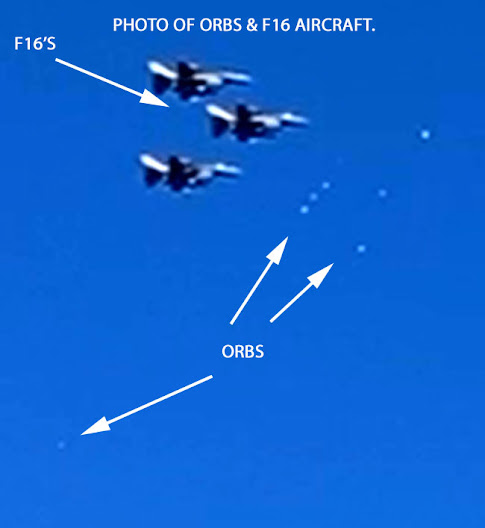 I wouldn’t have paid much attention to the sighting except there is a photograph of the F-16s and the orbs. The picture isn’t overly impressive but it is interesting.

Why are the planes so ill-focused and the orbs not?

So...UFOs were flying over a military parade and only one person saw them, only one person took a photo, and it's a blurry photo too? And the F16 pilots didn't seem to see them either?

Had a similar thought about this and have reached out to the original investigator to see if any attempt had been made to find additional witnesses. If there is another picture taken by someone else, then we have a much stronger case. However, as you know, there are those who might have seen something who wish not to get involved. I'll keep everyone posted on this if I learn anything new.