I have an update from last week’s show which was also posted here. I had reported on a photograph taken by an airline pilot over Memphis, Tennessee on January 31. It was of a bright object surrounded by a cloud of some kind that was visible for about five minutes. I have learned that on January 31, there was a launch of a SpaceX rocket and this might have been a fuel dump during the first orbit. I did post a long article here with some of the information suggesting all this. I also found another picture that was clearly from a SpaceX launch that looked just like that taken over Memphis which you can see here: 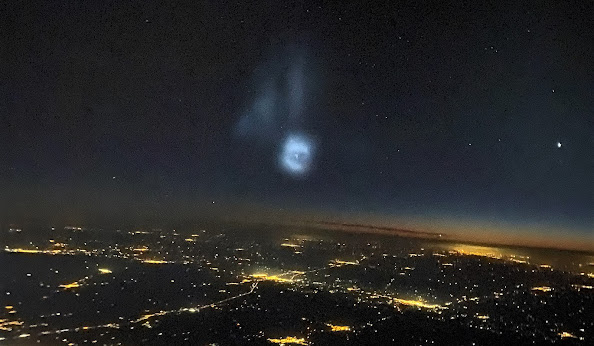 About the only thing missing from this story was directions of flight for the rocket, the aircraft, and the direction to the UFO. This would lock down the solution. Tim Printy supplied that additional information and we can now label this as an IFO, identified flying object.

This is what I have in mind as I mention UFO sightings during the Coast-to-Coast broadcasts. With all the tools available to us in the world today, we should be checking the information and searching for solutions. I use sightings that last more than a minute because the witness just doesn’t have the time to get a good look at the UFO. And if the sighting lasts for an extended period of time, there is ample opportunity for the witness to identify the UFO. I look for those that seem truly inexplicable, but given the situation, sometimes all I can do is report on what I see as an interesting sighting.

Although it has been said for years that 95% of all UFO sightings result in an explanation, it seems recently that the number is closer to 99%. The Memphis photograph fell into that 99% but it is that 1% that is of interest to us here.

The US Space Command announced that it believed, based on the research of two Harvard astronomers, Amir Siraj and Avi Loeb, that a bolide that exploded over the Pacific in 2014 was a rock from another star system. Loeb, you remember, was the scientist who made news by announcing that an object that flew through the Solar System in 2017 was artificial, meaning, of course, that it was of alien manufacture. He suggested at the time that the object had been traveling for hundreds of thousands, if not millions, of years, before it made its trip through the Solar System

The paper written by the Siraj and Loeb has not been accepted for publication in a peer reviewed journal because it relied on some data from classified government sources. One of those government sources, however, have endorsed the claim.

There are still sightings that are closer to home. A formation of lights, somewhat reminiscent of the Phoenix Lights, was spotted over Tucson on February 22 of this year. The witness saw a huge “V” formation of five lights that were hovering. The witness was outside the house, smoking, when he noticed the five lights described as a city block long and flying close to the ground. The lights were amber at first but then turned red. The lights disappeared shortly after that but not before the witness snapped three pictures.

In keeping with the triangular-shaped formations, the witness in Licking County, Ohio, said that in early March, while watching a satellite cross the sky, he spotted movement out of the corner of his eye. At first it looked like the heat shimmering off a highway, but above that distortion were eight to fifteen dim lights, moving quickly. The witness has seen satellites and the Starlink satellites, but these were very low and in the triangle formation. According to the witness, it was only by chance that he saw the formation because the lights were so dim.

Finally, on April 10th of this year, the witnesses in West Palm Beach Florida, saw a tic-tac shaped, white object flying next to an airplane. They said that the object was far away, flew in a straight line, and passed behind the clouds. They said that it made it look as if the airplane was moving at a snail’s pace.

There is a note that the MADAR node in Royal Palm Beach, Florida, showed a slight increase in magnetic field readings, but it wasn’t enough of a change to trigger the alarm. This does suggest the value of the MADAR network.

What all this shows us is that we are moving toward more acceptance of alien visitation. True, some of that visitation is by naturally formed objects, but we have always had those extraterrestrial visitors such as meteors and comets. It’s only recently that we’ve begun to think of terms of naturally formed visitors as arriving close to Earth, or even falling into the ocean. Now, we just have to apply the same scientific rigor to the tales of alien visitation so that we might solve that problem as well.