Project Galileo and Sightings for this Week.

It’s been just over a year since Dr. Avi Loeb announced the formation of the Galileo Project, which was a response to what he suggested was an alien artifact passing through our Solar System. It was a slower than light probe that he suggested was sent out by an alien intelligence searching for other life but had been in space for tens of thousands of years. Although his theory was not universally accepted, it resulted in the formation of an organization with the mission for systematic scientific research to look for similar artifacts or remnants of extraterrestrial technological civilizations that he postulated were flying around the galaxy. Project Galileo is, I suppose, a more robust search than SETI, though it certainly retains some of the elements of SETI.

In the coming year, he said that they hoped to “get our full suite of instruments to work, filming a movie of the entire sky in radio, infrared and visible light, as well as audio.”

From our perspective, meaning those of us in the UFO community, Loeb said, “We hope to get new high-quality data in a location where UAP were reported, and make our data open after publishing our results in peer-reviewed journals. The goal is to accomplish all of that within a year, before our next in-person conference." That conference was held at the beginning of this month.

I did wonder what his position on the new NASA effort was. Loeb said that he thought it was wonderful that NASA would be attempting to understand the mystery of UFOs, though he actually said, “UAPs.”

He did say, in something of a paraphrase of Stan Friedman, “But even if we have high-quality data on just a single object that demonstrates something else, such as an extraterrestrial technological origin, it would represent the most important discovery in human history.”

Stan had always said that it only takes one to prove the case.

But closer to home, a group partying on a boat near Port Orchard, Washington, on August 21 of this year, saw a group of very bright orbs in the sky. They thought the UFOs were near the SeaTac Airport but they didn’t look like any aircraft they had ever seen.

The lights were very bright and steady. They moved from being in a row, one trailing the other, to a triangle. Then another would join as one faded out. They watched the lights with binoculars and had a good view of them. They all agreed that it didn’t look like the usual line of up aircraft in a landing pattern, and the lights didn’t resolve themselves in the binoculars.

They did take a series of photograph, two of which follow. William Puckett published them on his UFOSNW website. 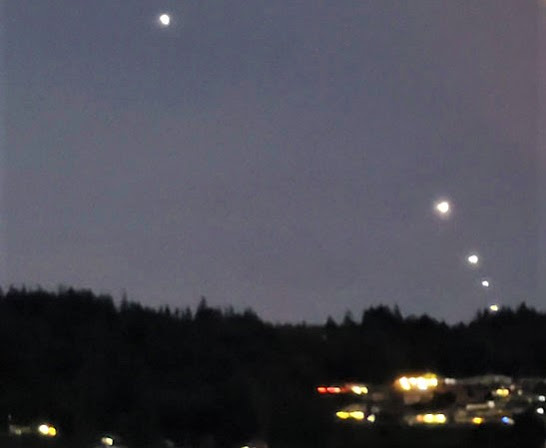 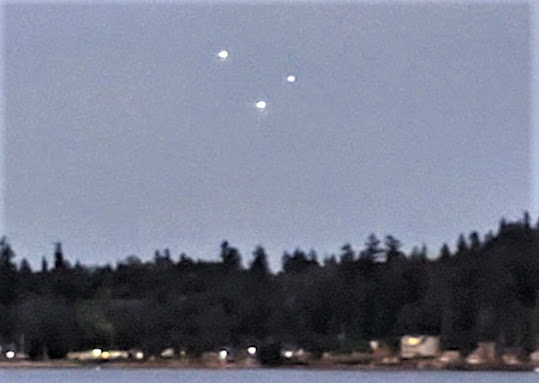 A day later, on August 22, a man and woman, driving along Interstate 80 near Grand Island, Nebraska, noticed a single bright light in front of them. They thought it was another car coming toward them until they realized that there were no mountains for the car to be on in the area. They thought it was Venus but the colors changed from a blue-white to a red to a green and back again. Confused, they pulled over to get a better look at the UFO.

They only saw the bright light as it cycled through the colors and just as they were about to get into the car, the UFO shot straight up and disappeared in seconds. For a minute or two they stood there, thinking it might come back, but it was gone. They said they had never seen anything like it and hadn’t thought about their cell phones until it was too late.

Regarding the Port Orchard photos and report: I've seen something similar (ironically enough, also while on a boat) and on both occasions the lights turned out to be Chinese Sky Lanterns.