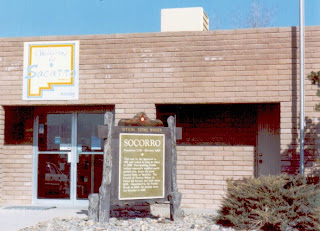 Just recently I was reading the Skeptical Inquirer (of course I read it... there is some interesting stuff in there) and they repeated the story that the Socorro landing was a hoax because the land where the object touched down belonged to the mayor of Socorro at the time, Holm Bursum, Jr.
In Watch the Skies by Curtis Peeples (Berkley Books, 1995) also makes mention of this fact. He wrote, "The final factor was where the ‘landing’ took place. The site was between the two main roads into town – U.S. 60 and 85. The land itself was owned by Socorro’s mayor. After the landing, the nearly impassible road was graded and plans were made to use the landing site as a tourist attraction. (The town lacked industry and was dependent on tourists.) The implication was the landing was a hoax, to bring in tourist dollars."
Even Jerry Clark, in his massive UFO Encyclopedia, wrote about this, saying, "...conspired with Mayor Holm Bursum, Jr. (who owned the property on which the UFO landing reportedly occurred)... though it's clear that he is not persuaded by this and suggests that it is of no more consequence than Phil Klass' original explanation of some sort of plasma.
All well and good, but this implication was created by Klass who originally floated the idea in his book, UFO’s Explained. The skeptics have accepted this as the truth, meaning that the mayor owned the land, but none of them bothered to check to see if that was true.
According to the local newspaper, El Defensor Chieftain, which did a long story about the Socorro landing after it was suggested in 2008 that a historical marker be erected at the site, noted that the land in question had been part of the estate of Delia Harris in 1964. In 1968, the land was bought by the Richardson family and they apparently still own it. Mayor Bursum had never owned it. I don’t know where Klass got that idea. Maybe someone mentioned it to him and he believed it, figuring they would know.
Or maybe it was because in 1966 the Chamber of Commerce president, Paul Ridings suggested they do something to promote tourism and thought the landing site would be a good place to start. They created a path lined with stones around a landing site, but it was in the wrong place. Apparently there was a lack of vegetation at the real site that frightened people. Some believed there was residual radiation, so they just moved the site over an arroyo or two. Maybe Klass, there a couple of years after the case, went to the wrong site and believed it as the place where the UFO landed and believed that the land belonged to the mayor.
And maybe Klass, who was there about the time that the Chamber of Commerce began to float the idea of a tourist attraction, thought there was some connection. Given the timing, Klass was there in 1966 as well, he made the leap of logic.
Anyway, we can put this particular bit of misinformation to rest. It really changes nothing. It just removes one motivation for a hoax... this one by the mayor and Lonnie Zamora. I don’t think anyone who met Zamora believed that he was a participant in a hoax. Nearly everyone said that he seemed to be honest, and if a hoax had been perpetrated, he had no part in it.
That does not exclude other explanations or other culprits in a hoax. It just takes this one out of the running.
Posted by KRandle at 12:37 PM

Kevin:
I thought I'd warmly welcome your new style blog. It has a fresh and improved 'feel' and appearance. Thank you, and I hope others agree.
I have no further comments on Socorro just now.

So Klass, who attacked other people's credibility, obviously had credibility issues of his own.

Well, yes, in my encyclopedia "Jerome (Jerry) Clark" cites this allegation concerning the genesis of the Socorro case. I also mention clearly that it was Klass's idea. I characterize the charge as based "on innuendo as opposed to specific evidence." I also point out that Klass had earlier proposed an extraordinary plasma phenomenon as the explanation.

I further note, "No evidence of a hoax would ever emerge." That remains as true now as it was when I wrote those words in the 1990s.

Klass often came up with solutions that no one else thought of... I believe that Klass believed there were no alien spacecraft and anything that suggested otherwise was a hoax. He was not above contacting people's employers and attacking them, which doesn't seem right to me.

I had hoped you would appreciate the use of Jerome as you had asked me to do so that people could find you on Google...

And my point was that the Klass explanation could be found in many sources. I meant no criticism of your work or your UFO Encyclopedia, which is an invaluable resource for anyone interested in UFOs.

I made no mention of the plasma idea because, in the context of this short piece, I was only looking at the "mayor owned the land" nonsense that had found its way into many sources. Sorry if it sounded as if I was condemning your work.

I'm sorry that I didn't make myself clearer in our private correspondence. What I meant to communicate was this:

In the formal context of a citation in a book, the author should be referred to by the name on the title of the cited work (e.g., book, paper, article), not by his or her nickname. A blog is, of course, an informal context; thus, you're free to call me anything that does not involve (a) profanity; (b) "Jerome (Jerry) Clark," and (c) -- most important of all -- tardiness to dinner.

Kevin, I realize this is an old post, but since your new book is on the topic.
According to this PBB file, the mayor owned the dynamite shack.
https://www.fold3.com/image/8696297