In the continuing argument about the UFO crash at Roswell and the mundane solutions offered, there came a new question. As noted in my blog about the V-2 and biological samples, someone had released a document about a missile launch on July 4, at White Sands Proving Ground. The records from White Sands for missile launches, copies of which I have, show no launch on July 4. Lance Moody wondered what, exactly, those records looked like, so I scanned the relevant portions.
I will note here, as you look at them, that two "rounds" in July seem to be missing. What the records show is that those rounds were postponed and show up later in the records. Apparently the test firings kept the original number, but was noted out of sequence. I have included the page for those later rounds.
There was also a launch of a "Corporal ‘E’" in July 1947. I have included the document for that launch as well. Finally, there was a table that showed all launches from White Sands for 1947, as well as many other years. I have included that page.
First, the page for V-2 launches in July 1947. 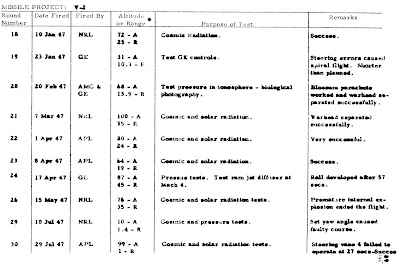 Next, the page to show that the missing rounds are accounted for in th record at a later date. 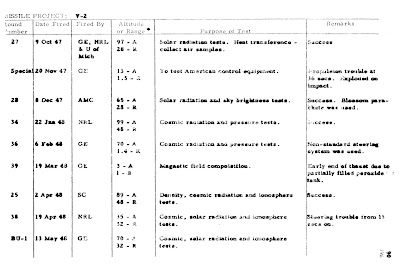 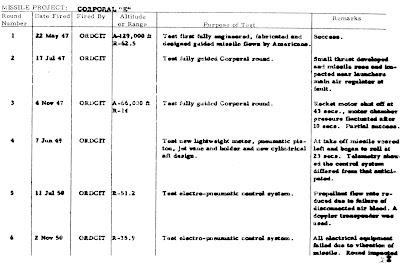 Finally the overall totals page that includes July 1947 that shows only three launches that month, and all are accounted for. 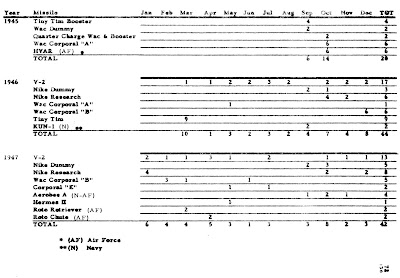 I will say here that I looked at the records at White Sands, at the Space Museum in Alamogordo, at the National Archives, and at Fort Bliss (El Paso, Texas) to see if I could find anything that would account for the debris recovered on the Brazel ranch. Nothing appeared in any of the records, there were no suspicious gaps in the data, and nothing that was still classified.
Everything is accounted for in the record, so this new document is clearly a forgery. This report provides all the documentation necessary to refute the idea that what fell was a V-2.
Posted by KRandle at 12:07 PM

My continued interest in this discrepency is simply to understand it, and I don't think it would explain the Roswell incident as being a result of a finding of a V-2 anyway. If there did appear to be missing firing info, though, it could be of interest to the case, in some way.

I am continuing my discourse with Mr. Pitfield, as he has said some interesting things, and has been very cordial with me. Perhaps I may convince him to at least put an asterisk next to that date, with the added counter-view provided by yourself, and the published WSMR record showing no July 4th launch.

I appreciate the fact that you see no reason to think there is anything missing in the records, and thank-you for taking the time to post the info. My only remaining question surrounding this issue has to do with the facts surrounding Harlod Watson, and his being tasked to actually spy on the Army. He was ordered by his superiors (which included General Twining) to do so, to find out what the Army was doing there at White Sands. Why would the new Air Force need to use ELINT to spy on the Army, and wouldn't this open up the possibility of launchings by the Army that were never recorded?

Thank-You again for your making this information available to us.

As it doesn't appear you can open a larger view of your scans, here are some helpful Links -easier to read- that correspond to this article:

Firing records
http://www.wsmr-history.org/FiringRecords.asp
--scroll down to caret to move on to proper page showing more details

--notice that between May 22, and June 2o, it simply says "Spring."
One of the summary reports on Corporal:
http://www.redstone.army.mil/history/pdf/corporal/corp2.pdf

notice that this reference is incomplete:
http://www.daviddarling.info/encyclopedia/C/Corporal.html though, at the bottom of the page it says, "Source: Public Affairs Office, White Sands Missile Range"

were fired from White Sands as part of the Hermes program. Among

these were six Project Bumper shots, employing a Wac Corporal atop

"Almost half the V-2s launched from White Sands were officially

Yes, many thanks Kevin for putting this together!

It is interesting that the online document in question gets several of the non-July 1947 dates wrong as well.

However, as I mentioned before, if the actual document used by Mr. Pitfield (I believe that Bob supplied that name) ever turns up AND is from before circa 1980, I would be shocked because at that time NO ONE was talking about Roswell, much less making up elaborate hoaxes about it.

That all came later.

Oh, and thanks to Bob for the above links and references as well.