While interviewing Rob Swiatek during the radio show, I asked why there were no duplicate pictures of UFOs, meaning the same craft or similar craft photographed at different times in different locations by different people. It seems that every UFO picture we have is unique. He said that he knew of a couple of pictures that were quite similar but didn’t have the facts of the cases at his fingertips. You can read the additional information here:


And, for those who missed the interview, you can listen to it here: 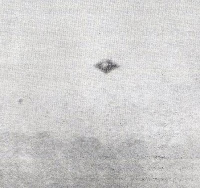 The point of this, however, is that Rob sent the information to me. There are two photos that appear in the APRO Bulletin for November 1978. The first of the pictures was taken by Saul Janusas who was on business in Brazil. He had been at the Rio De Janeiro airport on either June 20 or 21, 1978, and had caught the bus home. Through the bus window he saw an object. He grabbed his camera and took two pictures.


Nearly two years earlier, on May 12, 1976, Joshua da Silva and Gesareo Goncalves were on the road between Iteri and Passo Fondo, Brazil when, at about ten in the morning, da Silva spotted a silver object that he described as like Saturn with a ring around the center. Both men thought the object was of brushed metal and some twenty to twenty-five feet in diameter. When they were close, Goncalves stopped the car and then grabbed his camera. He took two pictures and then the object began to accelerate and disappeared in seconds. Technicians at El Globo, a 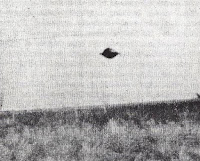 
This briefly, is the information about these two cases. The objects do resemble that of the object in the first picture supplied by Rob Swiatek. This shows that some of the photographs, taken years apart, do sometimes reveal objects that look similar. While this might not be of overwhelming importance, it certainly is interesting.
Posted by KRandle at 11:41 AM

The photo of a UFO allegedly taken by a French pilot may have provenance issues but it did resemble the McMinnville object.

I had thought about those pictures as well, but the lack of provenance is the killer for me. If there was more information about it, that would change my opinion.

Yes, there are quite a number of photos taken at different times and locations which appear to show a similar basic form (of various types). A quick scan through the various portfolios of these on line (e.g. UFO Evidence web site) is enough to suggest that...that probably doesn't mean that much by itself however as our perception of what a UFO 'should' look like has been formed over the years by a large number of sighting reports.

It may also be interesting to note, as I think you are saying, that there seem to be very few photos taken at around the same moment in time of the same apparent UFO from different nearby locations. That probably is significant.

I don't know if the following assumptions seem reasonable?:
1)Most UFO reports are misidentifications so most UFO photos are probably not fakes as such but represent something other than a nuts and bolts UFO
2) A proportion are fakes (I don't know what percentage, it seems more than the 2% often quoted for general reports, but that is just an impression).
3) It is impossible to prove a photo to be genuine.
4) the range of possible sources of misidentifications with photos is considerable, including artefacts created in the camera or image (film or digital) and presumably many of the visual stimuli that lead to misidentifications visually may also show up on camera.

Over the years the number of cases (of all types) that remain a considerable puzzle to me has dropped markedly - just a few dozen left now and there is a possibility that these represent the extreme coincidences that produce highly puzzling misidentifications occasionally, although on balance I don't think that is the most likely scenario at this time. Overall therefore I'd be surprised if there are many genuine UFO photos out there with most being misidentifications including many camera related artefacts - not too surprising that other people in the locality rarely take a picture of the same thing therefore as it usually isn't there in the first place or is a visual effect which may look different from a different angle.

There have been a couple of interesting discussion on specific images on this site that spring to mind. The McMinville photos which I think David Rudiak found the solution to (i.e. the overhead wire the model was suspended from had been slightly misplaced in the models of the locality with all the angles working very well for a suspended model once that issue was identified) and the Tremonton film which stood up to scrutiny very well indeed.