My main guest was David Marler who wrote Triangular UFOs: An Estimate of the Situation. However, before I spoke with him, I took a few moments to reflect on the death of Cliff Stone. Although I didn’t find many of his tales credible, he did have a wide-ranging knowledge of UFOs and was responsible for a great deal of information that had been obtained through FOIA, including information about Project Moon Dust and Operation Blue Fly. That also resulted in the Air Force being caught in a couple of lies about Moon Dust and Blue Fly projects.


David Marler, a careful and dedicated researcher, provided some insights into his investigation of triangular UFOs and how he became interested in them. He noted that they have become a predominate shape here in the 21st century, though in the past, sightings of them had been infrequent. He talked about one of the very first sightings from the late 19th century when astronomers saw triangular objects against the backdrop of the moon. You can listen to the interview here:

He described some sightings made by pilots, including one near a British airport in which the object violated the operating space of that airport. It was investigated by the CAA, the British equivalent of our FAA and they found no logical explanation for the sighting. The details can be found during the interview.

Another of the pilot sightings he mentioned, this one involving both radar and a military pilot, was from Albany, Georgia, on January 28, 1953, and reported to Project Blue Book. I found it interesting that the case was “sort of” investigated by the Air Force. This was during the time that the Robertson Panel was discussing the reality of UFOs and deciding there was nothing to them. Their recommendations were implemented not long after the Panel concluded their work. Here is some of the information from the Georgia case as found in the Blue Book files. 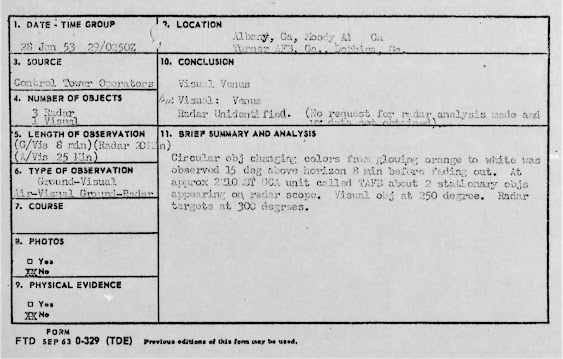 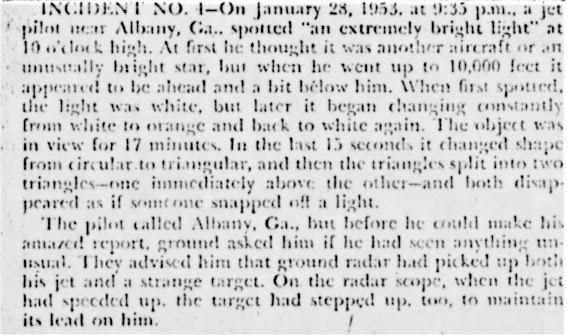 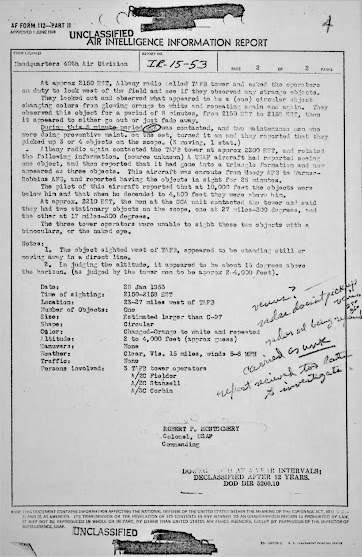 He also talked about a multiple witness sighting in which a number of police officers, scattered around southern Illinois made a series of sightings. It was described in the March 2000 issue of the MUFON UFO Journal. You can read about this case, as written up by Darryl Parker here:

We also talked about some of the attributes of the triangular-shaped objects. He knew of no case in which one of these objects landed, with the possible exception the Rendlesham Forest craft. The Rendlesham object did not fit into the triangular category easily.

He mentioned that there were some sightings that did involve occupants, but they were seen through windows on the craft and were silhouettes seen against a backdrop of bright lights. They were described as humanoid, but there was little in the way of external detail.

According to Marler, the triangular UFOs almost never make a sound, do not manifest EM Effects, and sometimes seem to shape shift. I did wonder if that was the result of changing perspectives rather than the craft actually changing shape.

Next up is Steven Bassett. We’ll talk about Disclosure, changes in the attitudes about UFOs, and what the new administration might have to say about UFOs. Questions can be appended here and I’ll get them asked. With Marler, I did get answers to the questions sent in, but not always by asking them specifically. The answers came up naturally in the flow of the discussion.

Yes, I noticed that last week. We have gotten it corrected, much to my delight and Dave's.