Rob Swiatek, a member of the Board of Directors of MUFON, told me about a sighting that is interesting but not necessarily something of an extraterrestrial nature. As he reported, it seems that the objects, or lights, were on the ground. Neither the witness nor the investigator was able to identify a source for the lights. According to the information supplied:

The principal witness obtained them about 12 noon at 34K feet over Bernalillo (Albuquerque), New Mexico, as the aircraft flew by on June 17, 2015.  The lights were said to be so bright as to be painful to the eye.  In his account, the photographer opined they were on the ground, but somehow shielded by the land so they wouldn’t necessarily be observable at ground level.  Anyhow, the relative positions of the lights/reflections one to another don’t change from picture to picture, even with respect to features of the terrain (at least in my opinion).  A few other details about the lights were included with his communication to MUFON.
In the world today, it struck me that we have an opportunity here, if the pictures were available to a wider audience. They follow: 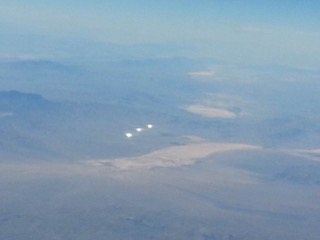 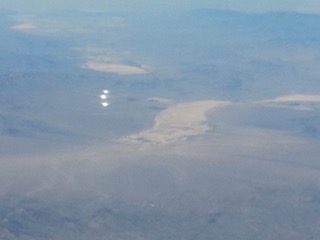 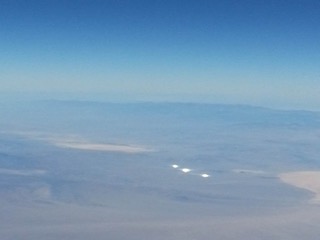 Rob’s thinking, and mine, is that if this is something on the ground, it is probably some sort of even environmental phenomenon or something constructed by people. We just don’t know. We thought that someone reading the blog might have an explanation. Rob will appear in a couple of days on the radio version of A Different Perspective. If we don’t have an explanation, and if Rob doesn’t have additional information, maybe someone listening will be able to help.

If you have any idea about the lights, let me know and I’ll forward that information onto Rob.
Posted by KRandle at 11:56 AM

If they were too bright to look at, that suggests the Sun, so some kind of vast mirror array on the ground maybe? I did a casual google of solar arrays in the New Mexico area and came up with a mention of a six dish array in Albuquerque in this article about California: http://www.power-technology.com/projects/victorville/

Problem is the project dates from 2004, not 2015, and mentions six dishes, not three, but it could be a possible explanation? This is not thorough research, I admit, just google, but the blinding nature of the light just suggests the sun and mirrors to me.

Water reflections can be fairly bright when viewed from the right angle.

The witness's unneeded speculation about how people on the ground wouldn't be able to see them should be a red flag.

Tom, Albuquerque is a big place. And tons of people have Solar Panels. Sandia's stuff is on the south end of town on the Kirtland Air Force cantonment, and the project you're talking about is over toward the old Manzano WSA by the Starfire laser range.

This is to the North of Albuquerque in Bernalillo or Sandoval County, though the land looks pretty empty, I don't see the river, Corrales, or even Rio Rancho so I'd bet that this is the Sandia Pueblo's land in all actuality. They have a casino but not much else, it looks completely deserted.

It would help if there were coordinates but I'm pretty sure its reflections off of a set of buildings or solar array. It would help to know what time it was also.

I live in Rio Rancho, which is literally right up against Bernalillo across the river and I do know the Sandia Pueblo installed some Solar arrays around then and the emptiness kind of makes me think that its there as opposed to Bernalillo itself.

I don't believe this shows alien spacecraft. I do believe that the speculation about the lights not being seen on the ground suggests the isolation of the lights rather than anything else. I do like the idea that this is some sort of solar array... that does make some sense, but I'd be happier if there were some structures seen in the photograph that could make use of the solar power.

I don't think a reflecting solar array will answer.

At 34,000 feet the plane was not put-putting along, but was probably making, what, at least 400 kts? Then, from the top photo to the bottom photo, look at the swing of what would then have to be the changing reflection angle, and you get what looks like at least about 90 degrees of change in angle as the plane flew by. Observers in the plane would not see a reflection of the sun for that amount of angle change over solar reflector station, IMHO.

So unless the solar array was somehow initially at the angle to reflect sunlight to the aircraft, and then the array "tracked" the aircraft as it passed by to keep the sunlight reflecting on the plane, then I don't see how a solar array can be the answer. But who knows.

It would help if we had a direction the plane was flying and what side of the plane the photographer was located so we could determine the direction and the direction of motion between photographs. I assume they are shown in order.

Thanks to Mr Adams for his local knowledge! Beats google every time. Hmmm, reflecting angles, hadn't thought of that. Good point.

I believe you are correct. Reflecting solar arrays are designed to recover -heat- energy (unlike solar cells), so they focus on the heat exchangers. Thus distant strong reflections from them are unlikely. Reflector systems -can- be designed to collimate sunlight into a narrow beam, which is then directed at a target. This is highly unlikely and probably illegal.

Albert, the solar arrays I linked to are reflector based systems as far as I can tell.

William Strathman's point is well taken. For the brilliant lights to be specular solar reflections, the reflecting surfaces would have to be planar & precisely tracking the flight path through an unbelievably large angle. One other bare possibility is the reflections could be from stationary spherical surfaces,but even in that case the aircraft would have to be maintaining a greatly restricted path relative to the reflectors.

I am quite certain that the photographs are of the Ivanpah Solar field near the Nevada/California border north of I-15. The design is not based on solar collectors, but rather, thousands of mirror that aim the sunlight toward a tower (the center of each of the three arrays of mirrors). The focused sunlight then heats the water system to turn to turbines and make electricity. This facility is in fact visible from the ground as well (seen a few times) and look pretty interesting. I have photos from the ground if anyone is interested.