This week I spoke with Rob Swiatek, he of the MUFON Board of Directors and someone who has been studying UFOs and UFO sightings for quite a long time. We first talked about MUFON and the list of speakers for their recent (or not so recent) symposium that included a few who might not have both oars in the water. Of course, we did mention a couple of them who seemed firmly grounded in science and research which I thought cancelled out some of the nonsense. You can listen to the interview here:
https://youtu.be/KsTDgej5bZ0

While Rob and I were conducting the pre-interview (which is my way of saying that I was checking to see if the Skype link worked) we talked about a UFO sighting near Albuquerque, New Mexico. Trying to pin things down, we discussed which county it had been seen in and Rob thought it might have been Jackson… the county due west of Albuquerque is Grant, though I’m not sure it makes that much difference. The aircraft which was carrying the photographer was apparently heading to the west. Rob did point out that a short video had been made of what seemed to be the same formation of lights some months later which, of course,
suggests some sort of permanent, manmade structure as opposed to something of an alien nature. A frame of that video is included here. The other four photographs follow this post. 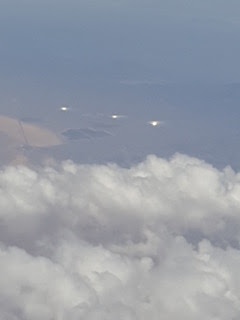 We also touched on abduction research and the types of UFO sightings being reported today. Rob suggested that MUFON had received from 4000 reports since the beginning of the year, but a very large percentage of them can be identified as something mundane. Or, in other words, the situation today is much as it has been in the past with people reporting things they see without being able to identify them themselves. IFOs as they’re called get in the way.

Next week, with luck, I’ll be talking with Ben Moss (who was postponed from the week previously) along with his partner, Tony Angiola.

The topic will be the Socorro UFO landing. They’ll mention some of the things they have discovered in the last year, and I’ll be talking about some what I learned after their first visit. Much of that is in my book, Encounter in the Desert, which is, of course, about Lonnie Zamora and what he saw land in Socorro.
Posted by KRandle at 5:18 PM