This week, after months of frustrating attempts to coordinate our schedules, Brad Steiger and I were finally able to talk about UFOs and the Paranormal. After Brad said some very complimentary things about me, we launched into the interview. I had thought we would talk about some of the strangest of the UFO landing reports including bizarre looking aliens. We began, however, with a short description of the Socorro landing described by Lonnie Zamora and what he said that he had seen in 1964. I did surprise Brad by mentioning that there were additional witnesses to the case, as documented by a report made on the night of the sighting, though that evidence is somewhat thin. All that is laid out in detail in Encounter in the Desert which is, of course, my book about the Socorro landing. You can listen to the

Our conversation, which seemed to be way too short for me, delved into some aspects of the UFO, but as Brad pointed out, there are alternative explanations for many sightings that don’t involve alien visitation. Brad suggested there might be some interdimensional contacts as well as alien visitation. 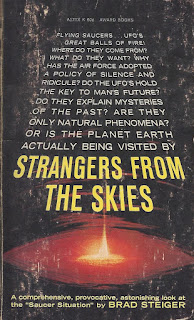 We also noted that descriptions of the aliens were not uniform, meaning that those in other countries didn’t see the same sort of aliens that we, here in the US, did. Some of those descriptions seemed to come from science fiction films such as Earth vs. the Flying Saucers. A photograph of one of those aliens from the movie, as described in a sighting from Argentina is seen at the left. We talked about the evolution of those descriptions from aliens who seemed to be wearing spacesuits (environmental suits?) complete with breathing apparatus, to the aliens of today who might be wearing flight suits but are breathing our atmosphere.

The other thing that would be of interest is the discussion of the publishing industry and how it was back forty or fifty years ago. I said that I had read his book, Strangers from the Skies in a high school study hall which dated both of us. Some of that discussion showed how things have evolved and proved this was a wide-ranging discussion.


Topic: SCU (Yes, you’ll have to tune in to learn that that is.)

Do you know the 1966 Gaffney SC case of 2 patrolmen. Keel interviewed 1 officer face to face, the other by phone.

Hutchins had been on the Gaffney Police for
about 6 mos. at the time, Huskey had been a
policeman for 5 years..

Some time after 4 am .. they were making a
routine patrol on an isolated, unpopulated road
outlying Gaffney .. as they neared a
right-angle bend in the road, they suddenly saw a
metallic object directly in front... The object
was descending and was about 20ft. above ground
when they first saw it. Hutchins described it as
spherical, like a ball, with a wide, flat rim around
it. No portholes or lights visible on it. It was
completely dark, reflecting a dull gold colour in the
car lights.

As the object settled to within a few feet of the
ground, both men got out of their car in a state of
benumbed amazement. Hutchins estimated that
the object must have been about 20ft. in dia.
A small door opened noiselessly on the
underside and a ladder, 4 to 6ft.
long, dropped down. White light poured out of the
opening, neither man could see anything in the
interior. A figure appeared ... descended
the ladder and walked slowly and deliberately toward
them. When the figure reached
about 20ft. from the two men it stopped.

"He didn't move stiffly," Hutchins told me.
"He moved just like anybody else, but kind of slow ..
like he was taking his time. He wasn't scared of us or
anything like that."

"He was about the size of a 12-year-old
boy .. maybe four feet." He wore no helmet or head-
gear and was dressed "in a gold suit with no buttons
or zippers". His costume was shiny, like metal, in the
reflection of the headlights .. not self-luminous.
"We were both kind of shakey and scared," Hutchins
admitted. "So he did most of the talking. When we
asked him questions, he wouldn't answer us, but just
went right on talking."..

"He talked real good .. like a college grad,"
Hutchins claims. "Didn't have any accent or anything.
He acted like he knew exactly what he was saying and
doing .. didn't make any quick moves or false moves.
He just stood there and talked to us."

Hutchins thinks he stammered out, "What are you
doing here?" The creature did not reply, but asked a
question of his own. "He wanted to know why we were
both dressed alike," Hutchins says, "so I guess we told
him we were police officers."

"His speech was very .. very precise. He pronounced
each word carefully. I can't remember everything
he said now .. but it wasn't anything very important. I
think I asked him where he was from but he didn't
answer. He just laughed. He had a kind of funny
laugh."

The confrontation was brief, perhaps only two or
three minutes. Then the creature announced: "I .. will
.. return .. in .. two .. days." He turned, walked
slowly back to the ladder, climbed in, the
door closed and the craft began to whirr. "It wasn't like
those whirring sounds in science fiction movies ..
there was no screeching to it. It was soft, like an engine
with a muffler on it." The object rose slowly into the
air and vanished into the black sky.

The policemen stood a few minutes in
stunned silence before they finally pulled themselves
together and returned to the Police Station.

They returned to the site the next day with a local
Councilman named Hill and found several fresh footprints
in the exact spot where the "little man" had stood.
They "looked like children's footprints"..

After the story had appeared in the local papers both
men were subjected to considerable ridicule, but neither
one received any hoax phone calls or crank letters..

Later I spoke to A. G. Huskey by phone (I did
not meet him personally). He confirmed Hutchins' story,
recited the same details. but showed a great deal of
reluctance. He wanted to forget the whole thing..

Hutchins appeared to be a straight-forward, honest
witness. There were many details he could not remember
and he did not seem to attempt to embellish his story
at all. His reputation in Gaffney is excellent.