First, an annoyance. For those interested in such things, I was doing a video lap, which most call channel surfing, when the term UFO caught my attention. Fox News was doing a segment on the UFO video footage from the Navy, showing the original Tic-Tac video from a couple of years ago. The hosts then discussed possible solutions mentioning that this all began with a new radar system, suggesting some sort a technical glitch as one possible solution. I have no problem with that. It was John Roberts who then suggested that it might be a bug on the lens… which led to a joke about computer bugs and real bugs and then a giggling response. We take a step forward with serious interest in UFOs and then we have two talking heads making fun of a topic they know nothing about. Just listening to their “insightful comments,” it was clear they knew nothing about UFOs and didn’t care to learn anything about them. Is it any wonder that so many of us have so little faith in anything they tell us?

Second, and much more important is a thought I had when talking about the possibility of alien debris in the hands of the government or private industry. We all think in terms of recovered space craft, but what if the material is just a small piece seen to come from a UFO. Such is the case from Crownsville, Maryland, on November 13, 1957.

According to the Air Force report, two hospital employees, whose names were redacted in the Air Force file but who are William A. Zick and J. Caswell, saw a round object, pink in color and as big as a house, hovering some 500 to 2000 feet overhead. In another document, contradicting the first, the size was described as a disk about three feet in diameter and the altitude of about a thousand feet. There was an explosion described as more of a popping sound and the UFO began a descent with a swinging motion like that of a parachute. Both Zick and Caswell said the object “grew smaller” as it descended. One small piece, the size of a cigarette pack, fell on the hospital grounds and was recovered. One of the witnesses said that as he picked up the object, the part that touched his hand disintegrated. Dr. Richard Jansen, of the hospital staff, saw the fragment and said that a metallic ash clung to the debris and he thought it might be magnesium. The residue was placed in an envelope.

Intelligence officers at Fort Meade learned of the debris and responded, roping off the area before checking for radiation. The fragment was wrapped and confiscated by the Army. M/SGT Slate was the man who transported the material to Fort Meade. The official Blue Book conclusion is “Insufficient for a Scientific Analysis.”

Because the fragment disappeared. Somewhere between the hospital and the lab it vanished. Maybe it just vaporized in the bag. According to the Air Force file, they couldn’t do anything without the sample to test, noting that the bag was empty when they received it at the lab.

Interestingly, however, there is one document that suggested the object was an accidently released parachute flare. The only problem is that the flares do not disappear and the parachutes are much larger than three feet in diameter. Had this been a viable explanation, the parachute should have been recovered. The documents can be found in the Project Blue Book files and follow here. 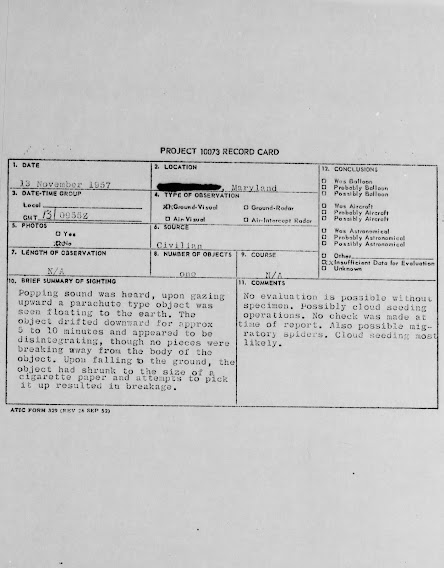 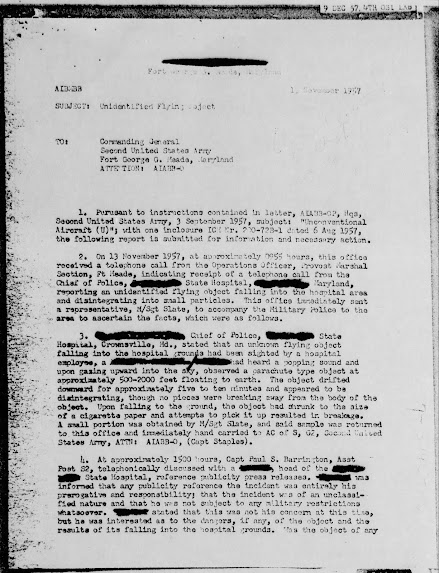 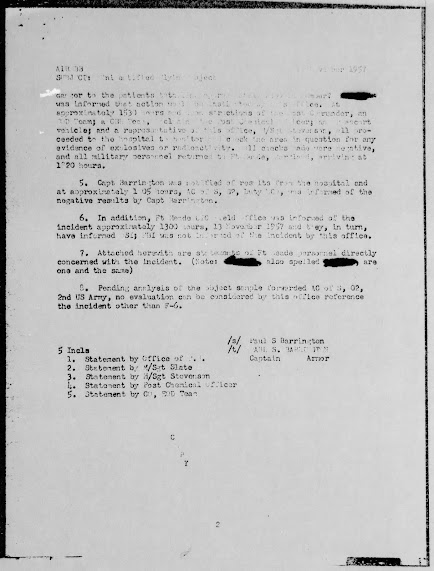 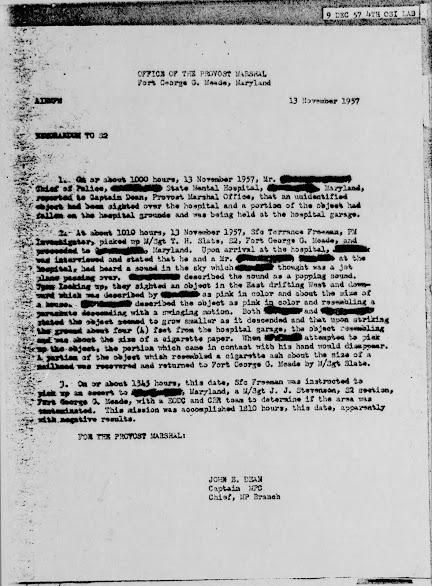 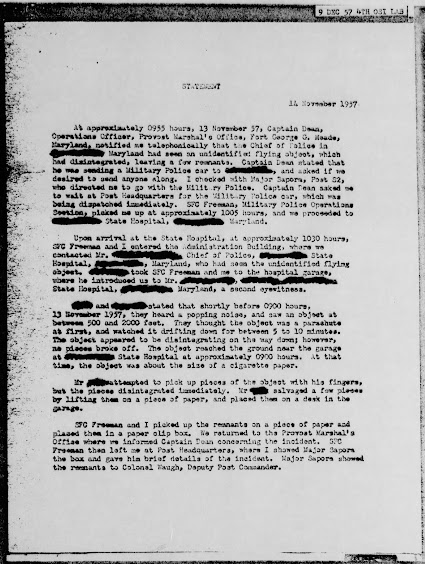 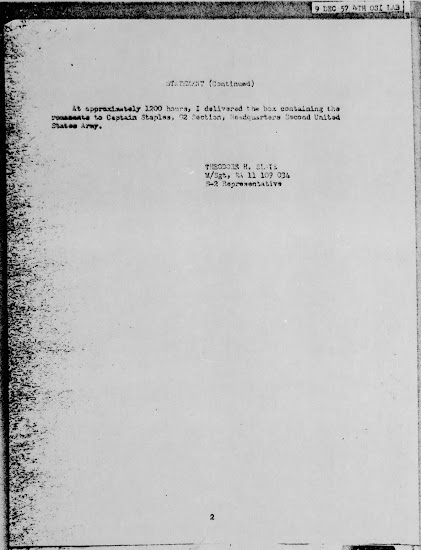 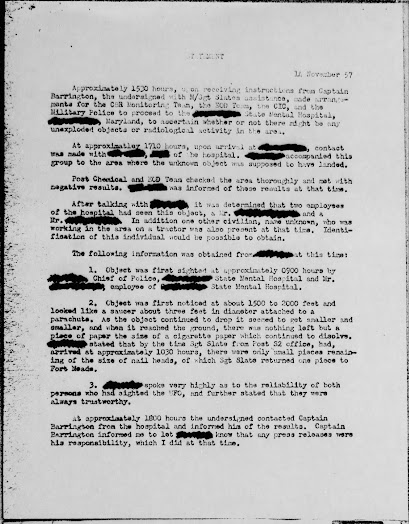 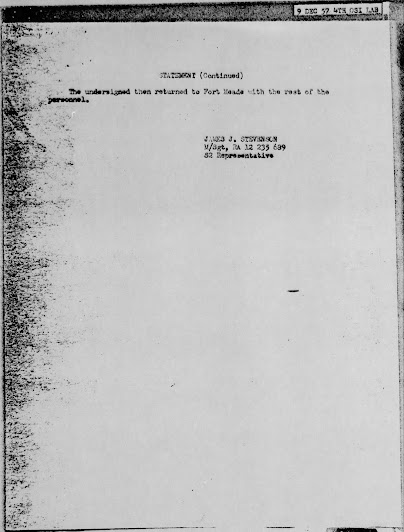 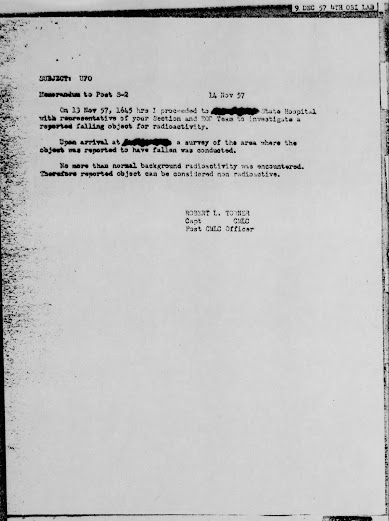 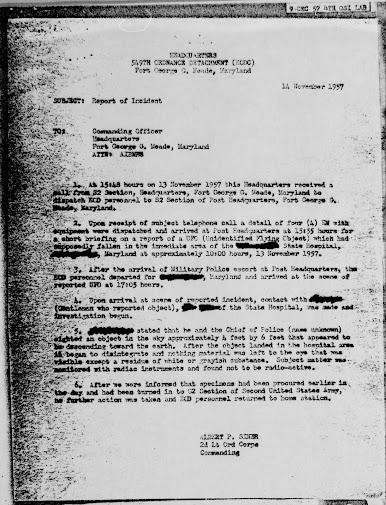 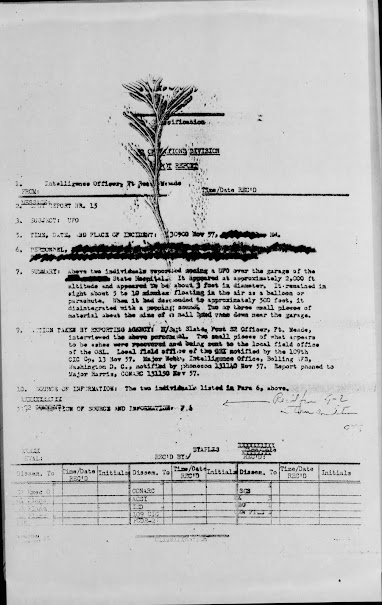 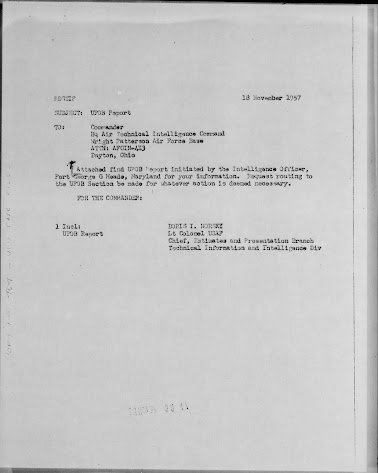 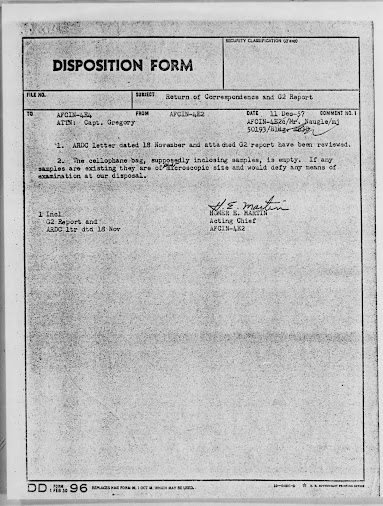 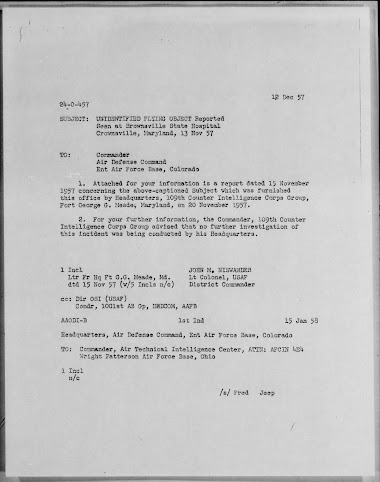 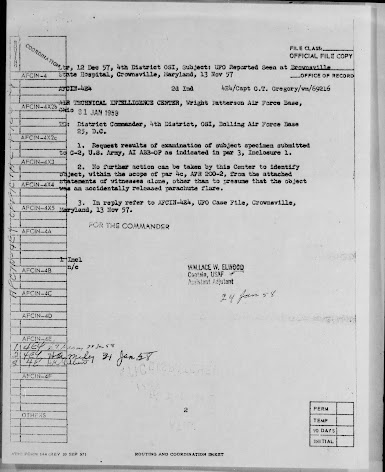 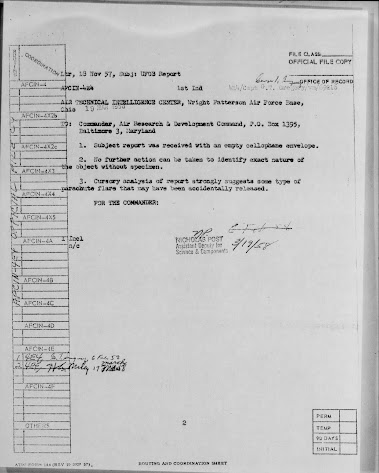 Moving on, I will note here that according to Ray Stanford, he had collected a number of very small, metallic fragments on the landing site of the UFO in Socorro in 1964. In the attempt to have them analyzed, those fragments were also, somehow lost. I covered this, in depth, in Encounter in the Desert. Both Ray Stanford and Ben Moss have written about this episode as well in their books about the Socorro case.

These weren’t the only small samples recovered from UFOs. A magazine writer in Brazil received several fragments that that were provided by an anonymous source who claimed to have seen the explosion of some kind of craft near the beach. Most of the debris fell into the ocean, but some landed on the beach. The chain of custody from the beach to the writer is broken because no one was ever able find the person who picked up the metal.

Some of the sample was submitted for analysis, first in Brazil and later in the US by APRO leaders Coral and Jim Lorenzen. The original findings were of a magnesium purity that was not obtainable by terrestrial industry. The Lorenzens supplied one small fragment to the Air Force, but the Air Force accidentally destroyed it during their analysis. They requested another sample but the Lorenzens said no.

The Condon Committee later claimed that magnesium of equal purity was available through Dow Chemicals in small amounts, but to obtain that purity was a complicated, time consuming, and expensive process. They had no explanation how someone in Brazil could have gotten any of the Dow samples. Here is a link to a scientific paper that covers the analysis of the Ubatuba sample:

These are just a few examples of small pieces of strange material that came into the possession of the US government. It just means, rather than an alien ship, what has been examined are just tiny bits of debris though their track record on this is rather poor. The government, whether the Condon Committee or the Air Force, seems to lose the samples more often than test them. Such tests would provide no hints about propulsion, electronics, or other aspects of interstellar travel, but could provide hints about the reality of alien visitation. At any rate, the history of these events has been well disguised in the past.

Socorro fragments: Those were found on a rock by Stanford allegedly that had UFO landing gear metal scraped onto it. Makes you wonder about the UFO rinkydink structures to be scraped so easily by measly Earth rocks. While I think the part he had tested (at NASA GSFC!) was lost in testing for some reason, I recall that Stanford stated he had dropped and lost the remaining part in his back yard! Ironic since the metal had travelled light years but was lost in such a vast back yard there was no point trying to search for it.

Hi Kevin, good morning. Excuse me for writing you here, but I need to ask you a question about the Pascagoula case. I wrote you a message on Facebook, but surely my message is in the spam folder.

I look forward to hearing from you.

I covered this tale at length in Encounter in the Desert about the Socorro landing.

Kevin,
I will try to check out your book. I recall reading this story in his Pantry book and emailing him. He was ticked off about asking if he tried to search for his dropped piece. But it was mysterious how the part he had was lost supposedly at NASA. Weird.