So, it has happened again. One of those specialty magazines, this one from History, that delves into the paranormal, gets some of it wrong. In the world today, paranormal includes UFO (or UAPs or flying saucers), along with ESP, ghosts, hauntings, the Bermuda Triangle and Bigfoot. I am, of course, somewhat biased. I don’t believe that UFOs should be lumped into the paranormal (and I could probably say the same thing about Bigfoot).

Yes, I was annoyed because they fell back on the Project Mogul explanation for Roswell. I had hoped for something more than the cursory examination given to that and an acknowledgement that Flight No. 4 had been cancelled, but that was too much to expect. For those interested in the long history of this explanation, just type Mogul into the search engine here or look at the long discussion in Roswell in the 21st Century.

What first caught my attention was the brief little note about the Aurora, Texas, crash of 1897. They noted that it allegedly hit a windmill and published a picture of a “UFO” near a windmill. The picture was taken in Michigan in 1966 and is of a lens flare. Anyone who has been around UFOs or cameras long enough recognized it immediately for what it was. Here is just an example of someone with no knowledge of photography or UFOs, selecting a picture because it fits the general narrative and not concerned with the truth.

The second problem for me was the photograph taken on July 16, 1952, in Salem, MA. For some reason, the Project Blue Book file is labeled as Beverlym (which is, of course, Beverly with a superfluous m at the end) in the Blue Book index but correctly as Beverly on the Project Card. Although it is difficult to read, the card is apparently marked as “unknown.”

But here’s the problem. According to a report in the file, “the results of this analysis indicated that the photo was a hoax. Extensive photographs were taken under similar conditions. Failure of the light source to cast reflections on the highly polished cars below indicated that the light was not outside and it was assumed by the analyst at the time, that the photo was a double exposure and for this reason was a hoax.”

Later, in that same report, it was noted, “It is believed that the photos represent light reflections from an interior source (probably the ceiling lights) on the window through which the photo was taken.”

In another report, the witness (name redacted but is Thomas Flaherty) said, “While working on daily reports I was summoned by Base Photographer (name redacted but is Shell Albert) … who called me to hurry and look at airborne lights. Looking out the window to the North West there appeared to be what was thought to be a quick flash. I actually could not say it was anything. It could have been reflections from passing cars or from the ocean.”

Not exactly the best of corroborating statements.

In another document, paragraph b said, “Three (3) objects glowing bright and then light and disappeared like a light being dimmed with a rheostat. Objects appeared to waver slightly and glow as a light source. [Name redacted but is Albert] could not determine the shape nor formation, aerodynamic features, or propulsion system. [Name redacted] did not see any trail, exhaust, or maneuvers. [Name redacted] did not hear any sound and could not tell if the objects were moving. After ALBERT [failed to redact the name here] developed the photograph, he noted there was a difference in numbers that what he had observed.” 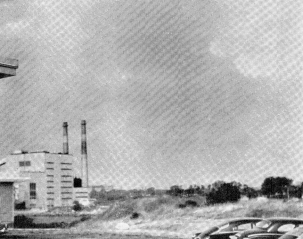 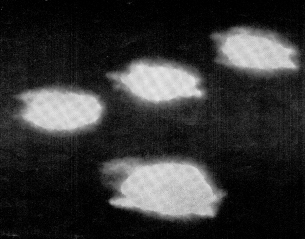 In Albert’s statement to the investigators, he said, “It was an extremely hot day and I think that perhaps some sort of reflection of ground reflections could possibly have accounted for the lights, but in my estimation this is an improbable explanation. The lens was quite dirty and so was the window screen. I cannot in all honesty say that I saw the objects or aircraft, merely some manner of lights.”

I will note here, for no other reason than I found it interesting, that Lieutenant Commander, W. D. Strauch, Jr., wrote, “All personnel interviewed or questions were informed that any information concerning the objects was ‘SECRET’ [emphasis in original] and should not be discussed with any one without the permission of the CO.”

The final note in the investigation, after attempts to duplicate the pictures under various conditions had been made, Colonel Delwin B. Avery wrote, “It is therefore concluded that the authenticity of the picture, taken by the Coast Guard photographer, is open to serious doubt.”

My point here is that there are better photographs that are not wrapped in the ambiguity we see here. I think the point that has been overlooked is that neither witness has a good idea what was seen and suggest something rather mundane. The statements of those involved seem to take it from unidentified into another realm, one in which we don’t need to dwell.

"Further, the remains of a windmill base were found near the well site, which refuted Ms. Pegues' statements (from the 1979 Time magazine article) that Judge Proctor never had a windmill on his property."

Once again, you miss the point. It wasn't about Proctor's windmill but about the picture of the alleged UFO, which is clearly a lens flare.

But, I wouldn't quote the wikipedia article on this because it isn't exactly accurate. T. J. Weems was not a Signal Corps officer but the Aurora blacksmith.

The overwhelming evidence is that it didn't happen whether or not Judge Proctor owned a windmill, or two, or none. Like so many other airship stories, about the only truth in it was there is a town named Aurora in Texas and there was a resident named T.J. Weems.

I dont believe you, Kevin!

What would it take to convince you? I have pictures that I took in Aurora and at the cemetery. I could suggest that you communicate with the Wise County Historical Society, which would confirm that two histories of Wise County, written within ten years of the crash make no mention of it. Since there was no CIA or Air Force to suppress the information, there is no reason that an event of the magnitude of an "airship" crash to be left out of them. I have, of course, my notes and whatnot collected at the time...

So, the real question is: Is your disbelief based on anything other than your opinion and the fact that I challenge some of the more ridiculous of the UFO stories? Is it because I just don't accept everything without evidence, or is it some sort of personal problem that you have?

Anyway, there is no evidence that there was a crash in Aurora, Texas, like it or not.

Kevin, maybe the most of the witnisses were dead as you interviewed the People of Aurora in the 70s. But two was alive in that Time and i wonder why you didnt speak with them or did they live no longer in Aurora at that Time (1970s).

You can read it here - Quote:

"MUFON uncovered two new eyewitnesses to the crash. Mary Evans, who was 15 at the time, told of how her parents went to the crash site (they forbade her from going) and the discovery of the alien body. Charlie Stephens, who was age 10, told how he saw the airship trailing smoke as it headed north toward Aurora. He wanted to see what happened, but his father made him finish his chores; later, he told how his father went to town the next day and saw wreckage from the crash."

So the Aurora UFO Crash is real, deal with it!

Here is the problem that you can't get around, or rather a couple of them.

First, a couple of people I talked with, who had been alive in 1897, told me that there was nothing to the story. However, they changed their tune when the TV cameras arrived. Now, suddenly, they remembered something about the crash.

Second, in the decade that followed this alleged crash, two histories or Wise County were published. In neither of them was there a mention of this crash. In those years there was no CIA or Air Force to intimidate them. Had there been any sort of event, surely something would have been recorded in those books.

Finally, those at the Wise County Historical Society (who helped me find some of the older residents) said they had nothing to validate the story, though they certainly would have liked something other than a single newspaper article...

And I'll throw this in as a bonus. The vast majority of the 1897 stories are just tall tales, told for the fun of it or to see their names in the newspaper.

There is NO valid evidence of any UFO or spacecraft event in Aurora, Texas, in 1897. I just can't make it any plainer than there... Oh, I don't have to look at the wikipedia nonsense because I have been there, talked to the residents, searched the cemetery, and took pictures.

Wikipedia is no nonsense! Only valid Sources are allowed in Wikipedia. That´s a conspiracy theory that Wikipedia is nonsense or dont work accurat or lies.

Buy yourself a Tinfoil Hat! ^^

Didn't say Wikipedia was nonsense. Said this case was nonsense. And sometimes a source that is less than credible sneaks passed their filters... However, you fail to answer any of my questions and ignore the evidence that doesn't fit your world view. Until you take time to answer my points, I don't believe I will engage anymore.

Lol i wish you guys were still debating this its like watching a good fight kevin keeps pounding the guy with big shots but lemurian just wont hit the floo. I had to read it twice lol good stuff